Enjoy unlimited access to all of our incredible journalism, in print and digital.
Subscribe Now
Advertisement
Abnormal Psychology

What Happened to Citizen Oversight of the Trinity River Project?

After reading late last week about Mayor Rawlings’ plan to make more plans for the city’s largest park (without the involvement of the Parks Department or the citizens of Dallas), I thought it was time to check in on the status of the Trinity Citizens’ Oversight Committee. As you may recall, the Trinity Dream Team’s leader, Larry Beasly, stated their proposal needed “public input and confirmation,” and that the design process “needs a conscience that is ‘of the people.'”

Their “suggestion (was) a carefully arranged monitoring of implementation, (then) and on an ongoing basis into the distant future, but an oversight panel of independent professional and citizen monitors who can make sure the concept does not get distorted through the detailed design process.” Peter Simek reported Beasly as stating that the multi-disciplinary team of experts should actually report to the citizens group. In that same piece, Council Member Lee Kleinman was quoted as stating his desire for more public input. The Dallas Chapter of the American Institute of Architects also publicly endorsed such an approach, stating they “strongly advocat(e) for an oversight body comprised of Dream Team members, local design organizations (including AIA Dallas) and private citizens to ensure that the vision of the Dream Team is faithfully reflected in the design and execution of a Great Trinity Park Parkway.”

So where do we stand on the formation of such an independent oversight body? Well, according to this week’s City Council briefing… 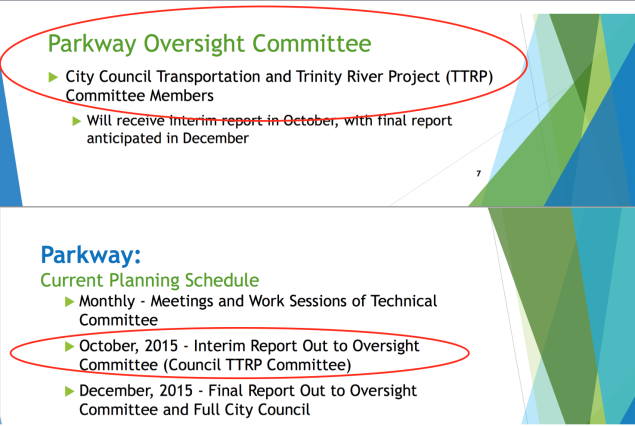 Hmm… it looks like the “Citizens Group” has somehow morphed into the Dallas City Council Transportation and Trinity River Project Committee. And who, you may ask, are those people?

So, there you have it: public oversight, City of Dallas-style. Lee Kleinman will be seeking public input and oversight from a citizens committee headed by Lee Kleinman.