Enjoy unlimited access to all of our incredible journalism, in print and digital.
Subscribe Now
Advertisement
Charts

It’s been fun listening to the budget debates over the last couple of weeks: Mayor Rawlings, Lee Kleinman, Jennifer Staubach Gates, Scott Griggs, Rickey D. Callahan, and Philip Kingston politely asking for some minor (less than 1%) tweaks to the budget — and City Manager A.C. Gonzalez responding by threatening to burn the place to the ground.

One thing that never came up, however, was the city’s new mixed beverage sales tax. What’s that? You haven’t heard of it? Well, you’re not alone. I can find no mention of it in either the city’s 2014 audited financial statements or 2016 budget. I also can’t find any record of the City Council ever having been briefed on the matter, notwithstanding the fact the State of Texas is telling us they’ve sent us $8,410,145.63 as our cut, just in the first year-and-a-half. Going back through the financials, I did find something with a similar description, an “alcohol beverage tax.” And wow, look at that: up 52% since 2012! 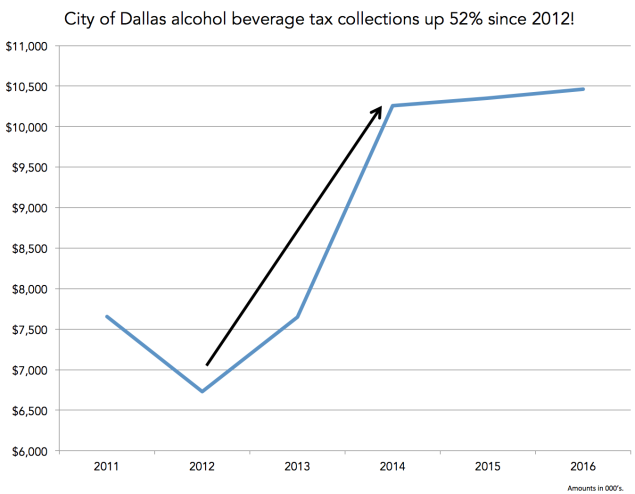 Once fully implemented (FY 2014 only reflected 9 months’ worth of the new collections), $3 million-$4 million per year in new money will be dropping into the city’s lap, money that could help address funding shortfalls at the libraries and Department of Animal Services. Time to check the budget, and, here we go, right here on p. 353:

Rats! The freakin’ money-losing convention center somehow snagged it. But how? I don’t remember the City Council voting to surrender our rights to this money to the free-spending, under-performing Dallas Convention & Visitors Bureau.

Luckily I remembered hearing something about it at the staff briefing delivered to the City Council’s Economic Development Committee on August 17:

So there you have it. In addition to the Kay Bailey Hutchison Convention Center/DCVB collectively sucking up 100% of the hotel occupancy tax and nearly 100% of the Tourism Public Improvement District‘s projected $56 million in gross revenues, guess they managed to get 100% of the alcohol beverage tax as well.

And that settles that. Except…let me pull out my copy of the bond docs, just to double-check, on p.22.

When and how was this authorized?