Enjoy unlimited access to all of our incredible journalism, in print and digital.
Subscribe Now
Advertisement
Abnormal Psychology

The Mysterious Plan for a Mayoral Compound

Another layer of secrecy between the people and their government?
By  Wylie H. Dallas | July 1, 2015|3:25 pm
Advertisement

The Dallas Morning News’ Rudy Bush brought us surprising news yesterday that a new $180,000, by-invitation-only compound is being constructed for the Mayor and his staff. I use the word “surprising,” because I don’t recall the City Council ever having been briefed on this matter, much less approving the expenditure. Based on a review of the plan that Mr. Bush somehow dug up, it appears the Mayor Pro Tem, Deputy Mayor Pro Tem and their four assistants are being kicked out for parts unknown, their offices to be taken over by the Office of the Mayor. 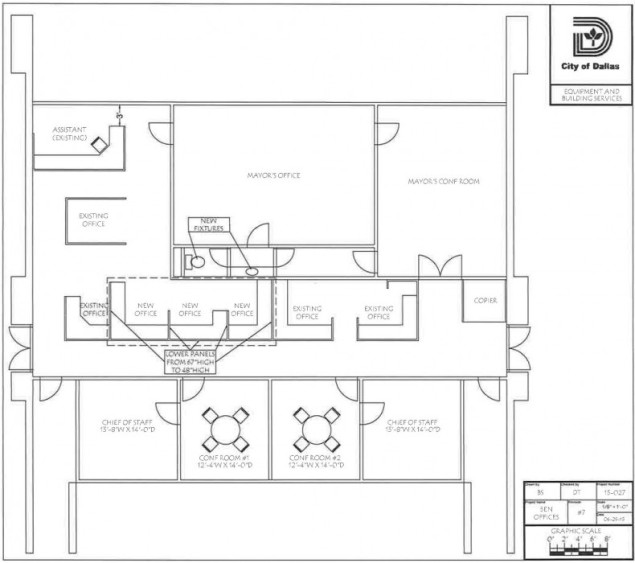 Bush does a great job of relating the historical background which resulted in the city of Dallas’ present-day opaque, unresponsive (at least to the citizenry) governance structure. Rather than plagiarize his thoughts here, I suggest you just read his column. Where I disagree with Mr. Bush is in his conclusion — that constructing a walled-off VIP mayoral fortress is somehow a push forward into a more transparent, responsive form of government. Absent actual reform, via a revision to the city’s charter, it seems that all we are doing is adding another layer of secrecy, by constructing yet another barrier between the people and its leaders. (Under Mary Suhm, the public was kicked out of City Hall’s free parking garage and forced to either use metered parking spaces or private parking lots. Then she ordered the closure of all entrances facing the remaining public parking lot while simultaneously installing a metal detector-equipped security compound on the opposite side of the building where supplicants are required to line up, partially disrobe and/or be subjected to pat downs prior to being allowed admission. Additionally, if these same hapless citizens wish to attend an actual City Council meeting, they are then required to go through a second metal detector/security screening. Moreover, if a meeting extends for several hours (as they frequently do), public attendees are forced to race back out to feed the parking meter, then run the security gauntlet once again.)

Council Member Philip Kingston also weighed in on the matter yesterday afternoon via Facebook and has a very different take. According to Kingston, “Where [Bush is] really wrong is in his analysis of from whom the mayor wants to wrest power. It’s not from his allies on the manager’s staff; it’s from the rest of council.” I’m inclined to agree. Continuing, he makes the point: “[T]he central and greatest political debate in Dallas right now is who runs Dallas: top-down, paternalistic business interests or bottom-up, neighborhood progressives?”

In addition, it appears that he, too, was surprised by Bush’s article, and he helpfully directs us to the only public discussion of the compound’s construction (the June 22 Special City Council Meeting). Kingston denies the Council has ever authorized funds for this project (Council approval is required for expenditures of $50,000 or above) and appears to believe that the project description was far from clear and accurate. Is he right? Let’s roll the meeting tape, (jump to the 9:10 mark):

To set the context, most of the council members were about to commence the process of choosing their offices and seats in order of seniority (the Mayor, Mayor Pro Tem, and Deputy Mayor Tem office together in a suite and sit at the center of the horseshoe along with the City Manager).

Council Member Scott Griggs: “Is there any truth to the rumor that you’re getting a new office, Mike? I heard you were gettin’ a…”

Rawlings (continuing off mic): “Yes. My office is the same size.”

Griggs: “I mean the suite, I heard it was growing.”

Rawlings (continuing off mic): “The outside is growing.”

Griggs: “Oh, I couldn’t hear you on the microphone.”

Rawlings (finally activating his mic): “The outside is. Yes.”

Griggs: “Oh, the outside is. So, uh… are they, the Mayor Pro Tem and the Deputy Mayor Pro Tem… which way are they moving?”

City Manager A.C. Gonzalez: “The plan calls for having the two offices for the Mayor Pro Tem and Deputy Mayor Pro Tem  to move to the east to the section so that they also can have a window view.”

So… there you have it, the City Council briefing on the new mayoral compound, delivered by the City Manager in a single sentence. Transparency… Dallas style.

The warming begins, just as we begin to assess the damage.
By  Matt Goodman
Local News