Enjoy unlimited access to all of our incredible journalism, in print and digital.
Subscribe Now
Advertisement
Philanthropy & Nonprofits

Longtime leader Paige Flink looks back at her 30 years of working with domestic violence survivors before the just-remodeled shelter enters its next era.
By Emily Heft | September 1, 2021|9:00 am
Advertisement

When Winter Storm Uri hit Dallas in February, the power went out in The Family Place. Then the lights and the heating shut off in its residential facility, Sally’s House, where more than 100 survivors of domestic violence lived. Plunging temperatures presented a new threat.

“These people who had been in a terrifying situation in their own homes had fled to us for safety, and now they were sitting in the dark,” says The Family Place CEO Paige Flink. “For three days, we had over 120 people without power.”

She first thought about the emotional and physical health of the people the shelter was aiding. Then she thought about the massive logistical hurdle in front of her and her team. Local hotels were filling quickly as Dallasites left their own freezing homes. The city’s emergency warming centers were set up to host individuals and families, not accommodate a sudden influx of 100-plus people. Plus, the location of Sally’s House is hidden to protect those who live there from their abusers.

“We rode it out, and maybe a little too long,” says Flink. “I just kept thinking, surely something’s gonna change, and the power will come back. When we finally made the decision, okay, we’re going to go, I just put out a tweet. And I’ve never used Twitter. The outpouring of help happened really fast.” 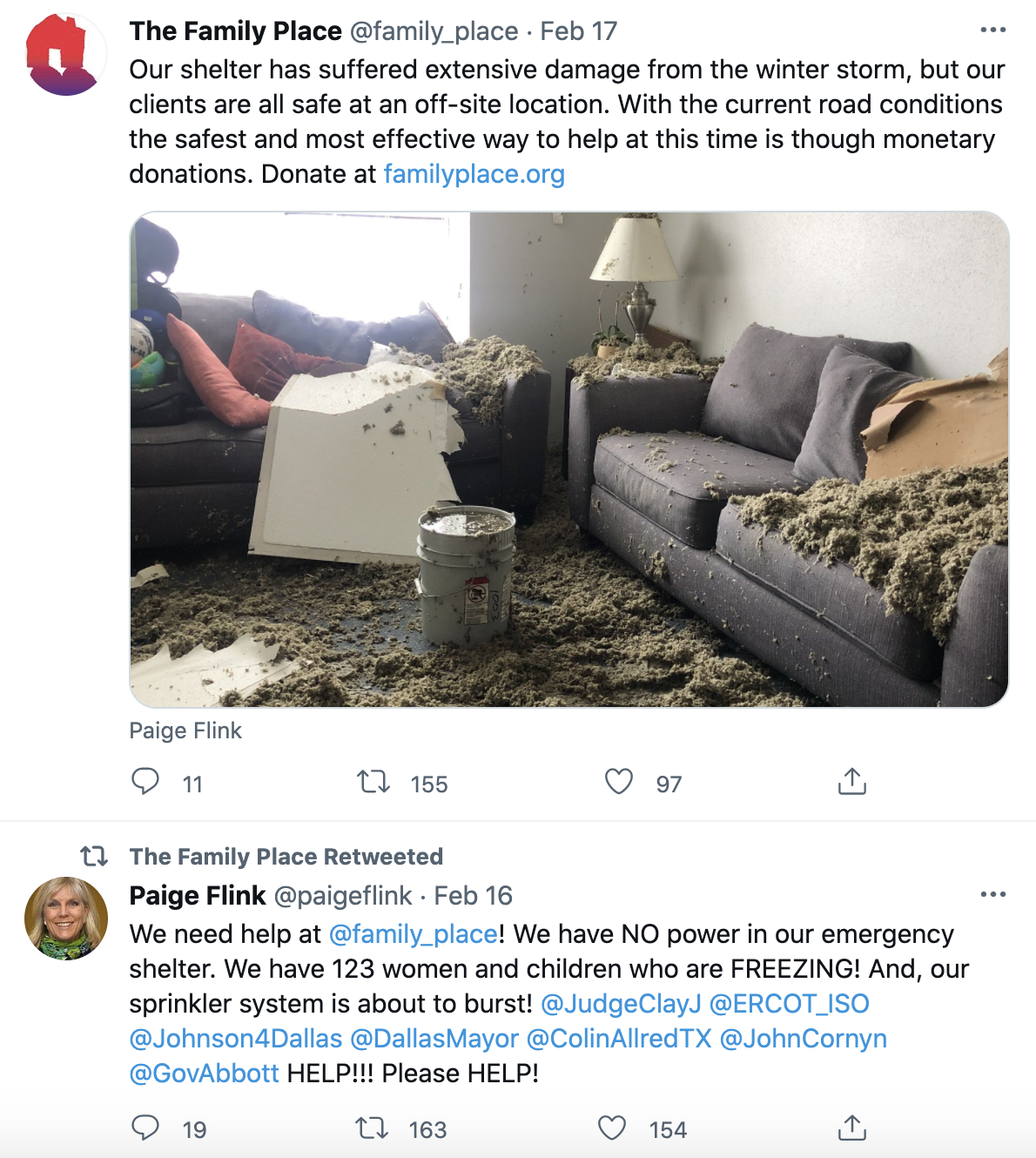 Pastor George Mason responded to Flink and offered his facilities at Wilshire Baptist Church, which still had heat and power. Assuming the relocation would be temporary, Family Place’s clients and team members started to pack up.

“We’re all frozen, and in the middle of everyone trying to get out, the ceilings started falling,” says Flink.

The facility’s pipes had burst, causing massive flooding and chaos. “It was really terrifying. People were screaming and walking through water,” Flink says.

Everyone was rushed to the warm and welcoming Wilshire Baptist. It was small; there were only two showers for all 120 people. Meanwhile, Family Place’s staff had been on duty for three straight days. Some of the employees had burst pipes in their own homes.

“It was amazing what they did, caring for other people,” says Flink.

On Wednesday, Flink returned to Family Place and realized that moving the clients back in would be impossible. Water had been streaming down the halls. Bedrooms were flooded and ceilings had caved in.

On Thursday, the pipes burst at the church, forcing the staff to move the clients yet again, a day ahead of schedule.

Finally, on Friday, the nonprofit was able to book a hotel. It paid for 50 hotel rooms for nearly six months straight, an expense that Flink estimates totaled half a million dollars.

The hotel also didn’t have security, which was a significant concern for families whose abusers could show up at any time. The Family Place hired off-duty officers to guard the hotel 24 hours a day. 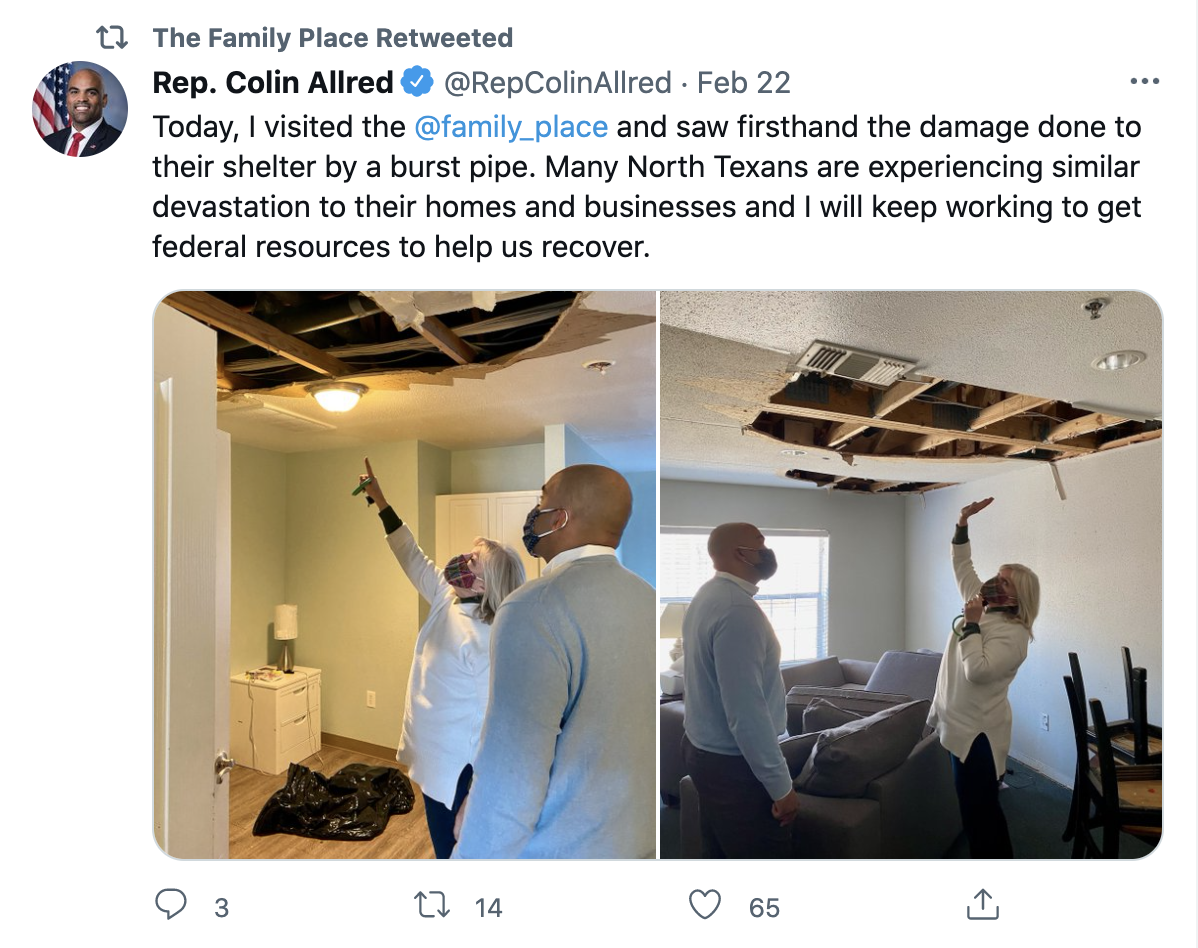 Even with help from board members and volunteers from the community, it took weeks for the organization to fall into a rhythm: when is breakfast? Where would the support groups be held? How can new clients be brought in? Plus, families were still calling The Family Place’s hotline for help, says Flink.

“They went from having an office where they saw clients to meeting clients in the lobby and in common rooms,” says Flink, “and clients were all behind the hotel room doors. It was hard to keep track of them, and everyone was on high alert.”

Clients who had previously relied on The Family Place’s apartment program remained in their hotel rooms for the entire six months. Other clients who needed temporary shelter stayed an average of 45 days, so some rooms were turned over five times.

Meanwhile, The Family Place’s facilities were being remodeled for the first time in 20 years. The unexpected vacancy of Sally’s House meant that all 20 bedrooms and 26 apartments could be renovated at once, rather than piecemeal repairs and updates. In addition to the reversal of any storm damage, each living space was given a fresh coat of paint and new flooring.

“It looks so clean and updated–just light and airy,” says Flink.

The building was also “winterized” to prevent power outages and floods in the event of another storm. All the pipes have been wrapped to mitigate freezing temperatures. A generator was installed that can power the entire building in the event of a storm or a summer brown-out. Because the ceilings were already ripped open, the nonprofit was also able to install a fire suppression system and a new alarm system.

In all, the repairs and remodeling cost The Family Place over $1 million. About $800,000 of that came from the donations that poured in during and after the storm.

The Family Place hosted a rededication ceremony on July 14 to celebrate the future of Sally’s House. Sally Hoglund, the shelter’s namesake, attended the ribbon cutting, just as she had two decades prior. Pastor Mason and Mayor Eric Johnson, two key figures who helped the organization literally weather the storm, were there, too. Board members and chairmen, who Flink says were “shoulder to shoulder with us the whole time,” were honored, as were the members of the organization’s operations team, who stayed at The Family Place overnight while it was evacuated to prevent intruders.

It was a beautiful day to close the book on a 30-year career, says Flink, who plans to retire this fall.

When asked what she’s learned about herself over three decades of leadership, Flink paused to reflect. “I’ve learned that I’m actually tougher than I thought I was,” she said. “I’ve seen some really horrible parts of humanity. I’m not cynical, because I still believe in the goodness of people, but maybe I’m more realistic now. There are some things that are going to be really hard to change.”

She’s quick to note that progress is indeed happening when it comes to lessening the rates of domestic violence, albeit slowly.

For one, the public’s perception of family and intimate partner violence has changed significantly. “​​It used to be a family matter–you just didn’t get into anybody’s business,” she says. “Physically abusing your spouse and kids was not illegal until the mid-80s.”

“Nicole Brown Simpson’s sister Denise Brown testified, and it passed. This created structured education training for police–suddenly, the police actually understood how to get involved, and they didn’t before,” says Flink. “We started having laws of protection, and shelters opened–more than just The Family Place–to start being able to address it. Now people are understanding that it’s not the victim’s fault.”

Flink is even more passionate about the underdog than she was before. “I’ve always had this fire inside that people should be treated fairly,” she says. “I had been raised with privilege, and I knew that I had the ability to help other people. When I became a mom, that really changed me. I realized as a mother that I didn’t want bad things to happen to my kids, and so they shouldn’t have to happen to anybody else’s kids.”

Flink is looking forward to passing the baton to The Family Place’s next CEO, Mimi Crume Sterling. “She is super smart, empathic, passionate, and ready to go,” says Flink. “She’s going to be great.”

Sterling comes to The Family Place from Neiman Marcus. She has had a prolific career in fashion, including a stint at luxury fashion house Hermés and a role working with clients like Ralph Lauren and makeup artist and author Bobbi Brown. She also led the PR department at Hearst Magazines.

“I really started to understand the value of telling a company’s story–its history and heritage and mission,” says Sterling.

Sterling’s first formal introduction to The Family Place was a meeting with Flink.

“She invited me to her office after hours a couple of months ago, and she said ‘here’s what we’re looking for, and here’s what I hope for the organization.’ Her transparency, integrity, and passion were all things that I admired and made me so excited about the opportunity,” says Sterling.

“I have high regard for [The Family Place],” she says. “I know the organization through partnerships [with Neiman Marcus Group], Partners’ Card, and the advocacy work that they do. But spending personal time with Paige was what really engaged me.” (Partners’ Card is a program that gives discounted rates at area stores in return for a donation to the organization.)

The application process was “incredibly rigorous,” says Sterling. “They did their due diligence.” She wrote multiple plans for the nonprofit and had several rounds of interviews with different staff members before she was offered the position.

Sterling is confident her skills from decades in the fashion and luxury brand realm will translate to her new role. “[I worked with] heritage brands–brands that have authentic stories,” she said. “When I look at The Family Place, it’s like a heritage brand. It has an incredibly authentic story and a clear mission.”

Flink is ensuring Mimi gets plenty of experience and education to be able to effectively work with the survivors who use The Family Place’s services. It’s a role that requires extensive knowledge of the nuances of family and romantic partner violence.

“Paige and I will be joined at the hip for at least a couple of months, if not longer,” says Sterling. “Paige is so valuable to The Family Place, and she continues to dedicate herself so wholeheartedly as we transition. It proves her authentic love for the organization and her commitment. I’ll pick that up as we go through this transition together.”

Sterling’s goals for the nonprofit aren’t the same as other organizations. Sure, it’s important to raise money. But success to her is seeing fewer people walk through its doors in need of help.

“My hope is that we work ourselves out of jobs,” she says. “It’s an impossible dream–that there won’t be a need for this type of service–but we work every day to chip away at this problem.”

Today, nearly six months after the storm, The Family Place is entering a season of new beginnings. The nonprofit’s staff are back to spending their days in warm and welcoming facilities and breaking in the updated amenities. The transitional housing residents are settling into rooms that are more secure than ever, so they can focus on healing and creating a brighter future for their families. Group counseling sessions, early childhood education programs, and medical and dental clinics are once again held in The Family Place’s safe locations, not in hotel lobbies. And Flink, confident that the nonprofit is in good hands, is free to step into the next stage of her life.

With Pasos for Oak Cliff, Jesse Acosta and Alejandra Zendejas have hand-picked and gifted hundreds of sneakers to students in need.
By Emily Heft
Doing Good

Kick Off the Year as a Volunteer, Starting on MLK Day

Make the day off a day on. Here are six places in Dallas where you can do some good.
By Rosin Saez
Education

The organization is on a mission to beautify the neighborhoods around four Dallas elementary schools. Here's how you can get involved.
By Lydia Brooks
D Magazine Directories