Jesse Acosta had a full-circle moment when he was hired as a teacher at Justin F. Kimball High School three years ago. He is a graduate of this Oak Cliff school, which is how he knew about its strong sneaker culture.

Students here must wear uniforms, which means shoes are one of the only ways they can express themselves through their outfits. Acosta, a sneakerhead himself, takes notice of students’ shoes as they squeak through the halls. Occasionally, he spots students making fun of others who don’t have the resources to regularly replace their shoes.

“I remember in my first year, there was a student whose soles were separated from the upper part of his shoes,” says Acosta. He wanted to gift the student a new pair but worried that doing so might embarrass him.

“I thought maybe I could give away shoes as prizes for good grades, but I wanted to be equitable and not just give them to the highest-scoring, smartest students in the classroom,” he says. “So I never figured it out.”

But COVID-19 forced schools to close last year and Acosta finally found the time to figure out the logistics of gifting shoes to students with financial hardships. The messages he received from students also inspired him to get started. Many reached out to seek advice and comfort as parents and family members lost their jobs. Some had loved ones die of COVID-19.

Seeing need in his community, Acosta paired with Alexandra Zendejas, a math tutor at Kimball whom he had originally met through Twitter years before they started working at the same school. Both had responded to tweets about giving back to Dallasites in need and are particularly passionate about lifting up the city’s Latinx population. Conveniently, Zendejas is also a sneaker lover. The two joined forces and formed Pasos for Oak Cliff, a 501(c)(3), in August 2020. (‘Pasos’ means ‘steps’ in Spanish.) 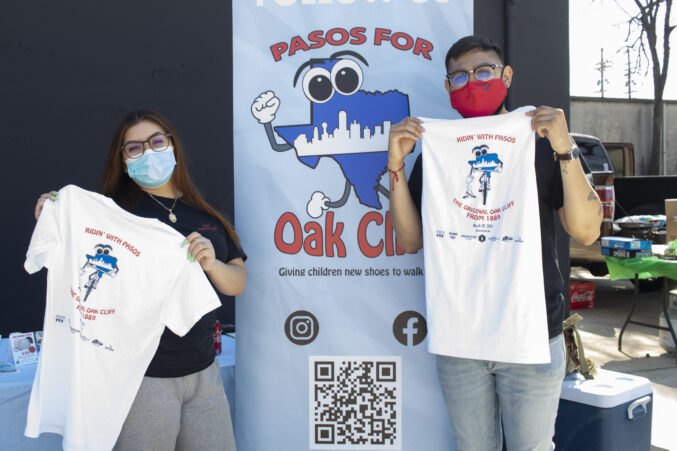 Zendejas and Acosta at a Pasos event.

Acosta and Zendejas first focused on students who had been personally affected by COVID-19. Other teachers at Kimball began to recommend students. Acosta and Zendejas confirmed that the students were experiencing financial hardships or had been impacted by the pandemic. From there, the teachers shared the student’s favorite colors, described what styles they might like, and helped confirm shoe sizes.

To date, Acosta and Zendejas have gifted over 650 pairs of shoes to students in Texas. They’re on track to hit 1,000 by the organization’s first anniversary.

The Pasos mission wouldn’t be possible without the sneaker community in Oak Cliff and beyond, says Acosta. Once the nonprofit launched, sneakerheads helped push out a donation link. Donations came from California, New York, and beyond.

The shoe gifting process is tailored to each recipient, so Pasos for Oak Cliff prefers to receive monetary gifts, not actual shoes. Acosta and Zendejas personally purchase every pair with a specific recipient in mind. “If it’s not something I would wear, I’m not going to buy it,” says Acosta.

Though the duo does look at durability and sturdiness, they focus on style. “We really want to boost their confidence,” he says. “From what we’ve seen in the classroom, new shoes do impact students a lot. It changes their whole demeanor. And hopefully, that can even help improve their grades.” 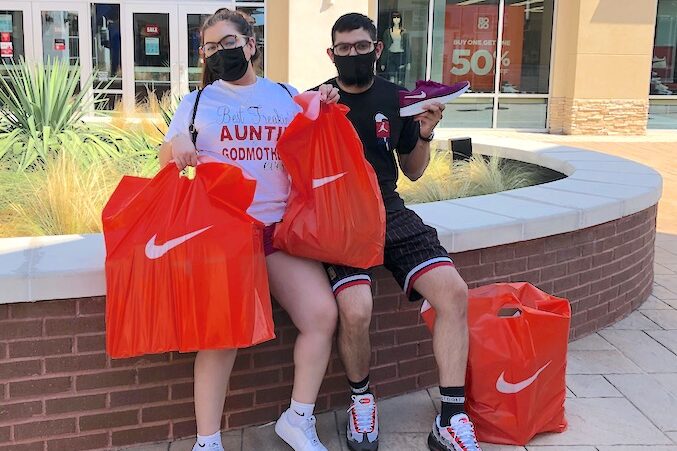 The Pasos for Oak Cliff founders after shopping at Nike.

About 90 percent of the shoes Pasos for Oak Cliff distributes are from Nike stores and outlets, one of the pair’s go-to brands.
Some students have been in a state of disbelief after receiving shoes. Acosta recalls one girl who posed for a photo with him but held on tightly to her new sneakers, afraid he might take them back. Once students realize that the new sneakers are theirs to keep, they’re elated and eager to return to school to show off their shoes.

While many recipients live in Oak Cliff, the Pasos team has gifted shoes to students across North Texas. Later this year, Acosta and Zendejas plan to distribute pairs to students in Austin and San Antonio, thanks to a grant they received from Amazon. Acosta’s sister’s godmother works for the retail giant and helped get Texas distribution centers involved in the Pasos mission.

Acosta and Zendejas have also planned successful fundraisers, like two cycling events that raised over $5,000 for their cause. In September, Pasos will host a swap meet-style marketplace with sneakers and vintage clothing, which will raise money for Pasos while supporting local small businesses. 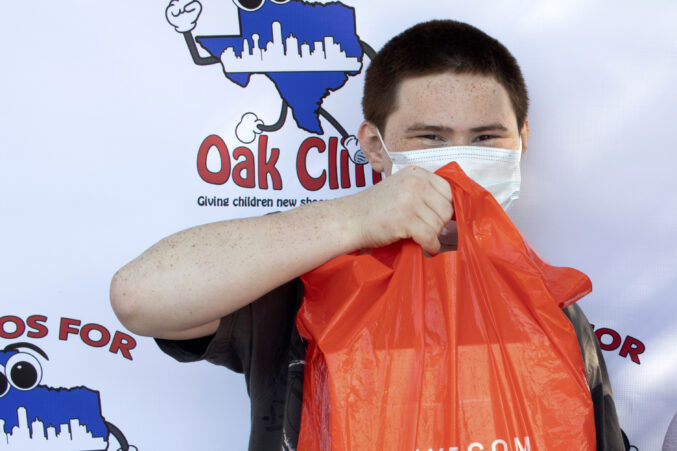 Acosta and Zendejas don’t want to stop at shoes. The duo has established a scholarship program for graduating seniors. Applications for this year’s round have closed, and 13 students were selected to receive support from Pasos. Acosta and Zendejas say they will continue encouraging and mentoring to help the recipients stay on track and graduate within four years.

To get involved with the Pasos for Oak Cliff mission, check out their website, give a monetary donation, or follow along at @pasosforoc.