Enjoy unlimited access to all of our incredible journalism, in print and digital.
Subscribe Now
Advertisement
Trinity River

Is the Harold Simmons Park in Trouble?

It appears the Army Corps of Engineers has concerns about the early plans it's seen.
By Matt Goodman | April 10, 2019|9:58 am
Advertisement

There is concern that the Harold Simmons Park will need to be re-thought. At least two members of the public entity (known as a “local government corporation” or LGC) that is overseeing the development of the park within the Trinity River levees have questioned whether the Army Corps of Engineers will approve the current design.

Their concerns were made public at a meeting last month in which the head of the private entity that is building the park, the Trinity Conservancy, was peppered with questions about whether its design would fit within federally approved parameters. Brent Brown, the Conservancy’s CEO, maintained that it would, calling the process “iterative.” In interviews, the LGC members said they trusted Brown to deliver a design that will be sent to the Corps in August for the first formal review, when it’s about 35 percent completed. But the message of one of the LGC members present at the meeting with the Corps stings: he said he felt it was a “no-go.”

Because the proposed park site sits within a floodway, federal law dictates that whatever is built there adhere to a comprehensive design schematic known as the Balanced Vision Plan. The Corps approved it in 2015; it is supposed to be the backbone of the design for anything that gets built in the 2,300-acre floodway. The Balanced Vision Plan makes it clear that recreational components cannot interfere with the movement of water through the area.

The project in question is Harold Simmons Park, a 200-acre carve-out, a privately funded $150 million park that will sit between the Ronald Kirk Pedestrian Bridge and Interstate 30.

On March 22 at City Hall, there was a regular meeting of the Trinity River’s LGC, the public body that acts like the board of directors for what goes on in the floodway. Its role is to make sure a park gets paid for and built. A few members of the LGC opened the meeting with concerns about feedback that the Corps had recently provided to the city, the Conservancy, and its partners regarding the presentation of a design plan that is about 10 percent completed. One of the options was to scrap the plan and start from scratch, according to two people who were present.

“The Army Corps of Engineers very quickly and very openly stated that they had some serious concerns with the 10 percent plan as it was presented,” said Andrew Quicksall, an LGC board member and an associate professor at the Lyle School of Engineering at SMU. “My take on it was that there is some thinking and decision making to do.”

Quicksall later had stronger descriptions of that meeting. He said he walked away believing that the Corps interpreted the design as “a no-go.” Board member Linda Owen corroborated his take. “In general,” she said, “I heard what Andrew heard.” In an interview, Quicksall said the Corps appeared to be concerned about the plans to place channels within the floodway and how they would affect the hydrology of the river. They didn’t care about the recreational amenities atop the levees. The Corps would not elaborate. Here is all the Army would say, in a statement:

“The Fort Worth District has had preliminary meetings with City of Dallas representatives concerning several courses of action with recreation features within the Dallas Floodway. We have not received an official request from the city so would be premature for us to comment on any of the courses of action which have been proposed. The Dallas Floodway System continues to function as designed providing flood risk management for the citizens of Dallas.”

Brown, CEO of the Trinity Conservancy, said this is all standard procedure. He maintained that it’s early in the process. Plans aren’t submitted for formal review until they hit 35 percent, which, he said, gives the Conservancy plenty of time to adjust where necessary. His deadline for that is in August, and he said he’s on track. Brown says he and the Conservancy meet and speak often with architect Michael Van Valkenburgh and the hydrology firm Limnotech to discuss modifications. He recently made a trip to New York to do just that. He said that trip had nothing to do with the Corps meeting; it was normal operating procedure. Pat Priest, the chair of the LGC, said the meeting was to “get the design back on track.”

“Projects are dynamic and iterative, and interpretation — ongoing consistent working relationships between all the parties is the way projects move from point one to point 10,” Brown said. “The Conservancy is committed. If that’s not strong enough, we will deliver a park design and a park that works within and complies with the Army Corps of Engineers’ federal regulations of the record of decision for the Dallas Modified Floodway Project.”

Quicksall and Owen, who were present during the meeting with the Corps, continued to hold Brown’s feet to the fire. “There was a direction of the meeting going one way, and then it was an about-face U Turn and we went in another way,” Quicksall said. “It’s in the context of that surprise, that, hey, the design was, by the interpretation of the Corps, was a no-go, right, that these questions have to be asked.”

Quicksall said there were three options discussed at that meeting. One was to scrap the Balanced Vision Plan and start the entire process over again, which everyone in the room agreed was not realistic. The second was to find a middle ground, “to try to amend what was in the original design to make it fit what’s already been approved.” The third was to start the design again from scratch, building it from the ground up.

A “design reveal” was planned at Gilley’s next month, but there will be no reveal of a design, Priest said. Instead, it will be a dialogue about the design process. Does Brown regret presenting these ideas when the Corps may have protests that sink them? “No,” he said. “We are being very deliberate in an effort not to create an overpromising and in turn indicate aspirations and directions, right?”

The Conservancy, despite reiterating that the design is not finalized, has made detailed presentations to the public. One late last year involved a 60-foot print on white fabric that chopped up the 200 acres into cross sections. That detailed all sorts of things: manmade channels, managed grasslands, wetlands, paths, gathering places atop the levees, access points, pedestrian bridges, and urban-style parks above the floodway. Limnotech said it used data to better understand regular flooding, erosion, and the impact of adding additional trees, wetlands, river channels, bridges, and other changes. There were lectures about the history of the river, how much water it can hold, and its ecology and hydrology. It wasn’t a formal plan, but it certainly looked like one if you didn’t know better.

“If we show stuff too early, or if we don’t show anything at all, we’re damned if we do, damned if we don’t,” Brown said in a later interview. “We’re presenting everything in the spirit of what we’re trying to accomplish.” 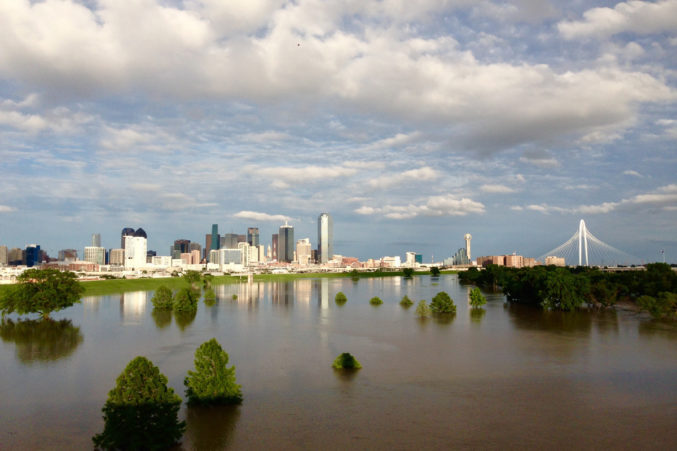 The concern now is whether that spirit is misplaced. There is a push to simply “re-wild” the floodway, incorporating elements that will embrace the native flora and fauna that will thrive there, returning the area to a state more resembling a natural blackland prairie. Or as close to it as possible. And, indeed, a plan had emerged to do just that at a neighboring patch of land.

When the Conservancy and the city met with the Corps, Quicksall said the presentation was similar to what the public saw at Gilley’s. At one point, Owen questioned the park’s hydrology and said the Corps “wouldn’t accept a 200-acre carveout” of the 2,300-acre floodway because of how it may affect water flow in other parts of the floodway. Brown said they’re “right on track with that” and that the models being produced are within what’s required by the Balanced Vision Plan and plan for how Harold Simmons will affect the rest of the floodplain.

“I just think we got some really good input and we got some input at an early stage,” Priest said. “I consider that to be a success.”

Longtime Trinity park skeptics called for blood. Angela Hunt, the former councilwoman who led the fight against the Trinity toll road and has called for that simpler re-wilding of the floodway, posted the meeting to Facebook over the weekend. She called for the city to terminate the contract with the LGC and sever the relationship with the Conservancy. Councilman Scott Griggs, a mayoral candidate, echoed Hunt’s sentiment.

Brown, in the later interview, maintained that the Conservancy is on schedule to submit a formal review to the Corps in August. At 35 percent, that plan will include more technical detail regarding hydrology and hydraulic modeling. He isn’t asking for a delay. He says the meeting with the Corps was a “coordination meeting,” one requested by the city to receive feedback on the current progress. He says nothing technical was discussed and the Conservancy is continuing its outreach and funding efforts as Van Valkenburgh and Limnotech move forward with design.

“We gave a very high-level update of where we were and we were getting feedback on that. There’s work to be done,” Brown said. “I would’ve been surprised if they said everything is perfect.”

Quicksall said his goal in the meeting was to get Brown on the record about the Corps’ concerns. He said he wanted assurance that the Conservancy understood that things as they stand may not be kosher when it comes time for the Corps to give a formal OK. “They’re not a consulting group,” he said, “they’re an approval group.”

“I’m gonna soften,” Quicksall said about his language during the meeting. “The LGC is an oversight body. When Brent and his professional opinion says he can move from the current 10 percent to the desired 35 percent, I trust him. … At least until the next checkpoint, I’m going to trust him.”

During the pandemic, our city’s top spots doubled down on the destination bathroom, where every carefully curated inch is an extension of the aesthetic, and full immersion is the goal. Here are our maximalist favorites, old and new.
By Rosin Saez and Eve Hill-Agnus
Architecture & Design

This Dallas Designer Filled Her House with Marble and Sunshine

The Past, Present, and Future of Cancer Care Design

Learn about how far cancer facilities have come and where they are going to better support caregivers, with Perkins and Will.
By Chance Townsend
D Magazine Directories