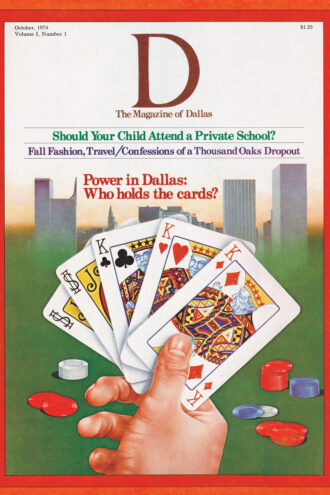 D Magazine was founded in 1974 by two University of Texas graduates, Wick Allison and Jim Atkinson. Both had a vision of giving Dallas an independent city magazine with an impact that would serve readers’ interests. They developed their concept after-hours while Allison, a Dallas native, attended graduate school at Southern Methodist University and Atkinson reported on KERA’s daily Newsroom program. Their vision was backed financially by young Dallas business people who shared their belief in the need for a strong city magazine.

What was merely an idea, however, became a reality when Stanley Marcus, the legendary retailer, sent a letter to his 200,000 Neiman Marcus cardholders in the Dallas area recommending they subscribe to the as-yet-unpublished new magazine. In October of 1974, the new magazine debuted with the then-shocking cover story on “Power in Dallas: Who Holds the Cards,” an analysis of the fabled Dallas establishment and the interlocking corporate directorships by which they managed the city’s business. Not surprisingly, the issue was a new day for Dallas journalism. It sold out on local newsstands.

Not everyone was happy with the new magazine. It was frequently attacked, and even sued, by politicians and business interests who were upset by its candid editorial content and strong positions. But readers continued to support D even when advertisers didn’t, and by 1977 when it launched its annual “Best and Worst” awards, D Magazine was an unqualified financial and editorial success.

In 1990, D Magazine was sold to American Express. In 1995 Wick Allison once again assumed the helm of the magazine and in 1996 led a group of investors in buying the magazine. Today, D Magazine is again part of the lifeblood of Dallas. Circulation has soared some 500 percent since 1996, and D has become one of the best-selling magazines per capita in the United States on local newsstands. The reason for its success is its devotion to editorial quality. D Magazine has been named the “Best City Magazine” in the nation eight times by the City and Regional Magazine Association.

D Magazine Partners also publishes D Home an inspirational and sophisticated source for living a beautiful life in Dallas, D CEO an insightful, authoritative, and provocative publication which covers local businesses and businesspeople, D Weddings the ultimate local resource guide for every bridal need, Dallas/Fort Worth Medical Directory, Private School Handbook, and Dmagazine.com, an award-winning, daily resource for best restaurants in Dallas, recommendations for things to do, local news, and commentary on life in Dallas.