Most folks in these parts groom their yards like they are precious show ponies. But because of that gosh-awful storm, every neighborhood in Dallas-Fort Worth looks sad. I asked some local landscape architects whether it’s time to invest in a machete or a bulldozer. The answer, somehow, is none of the above. Be patient, they say. 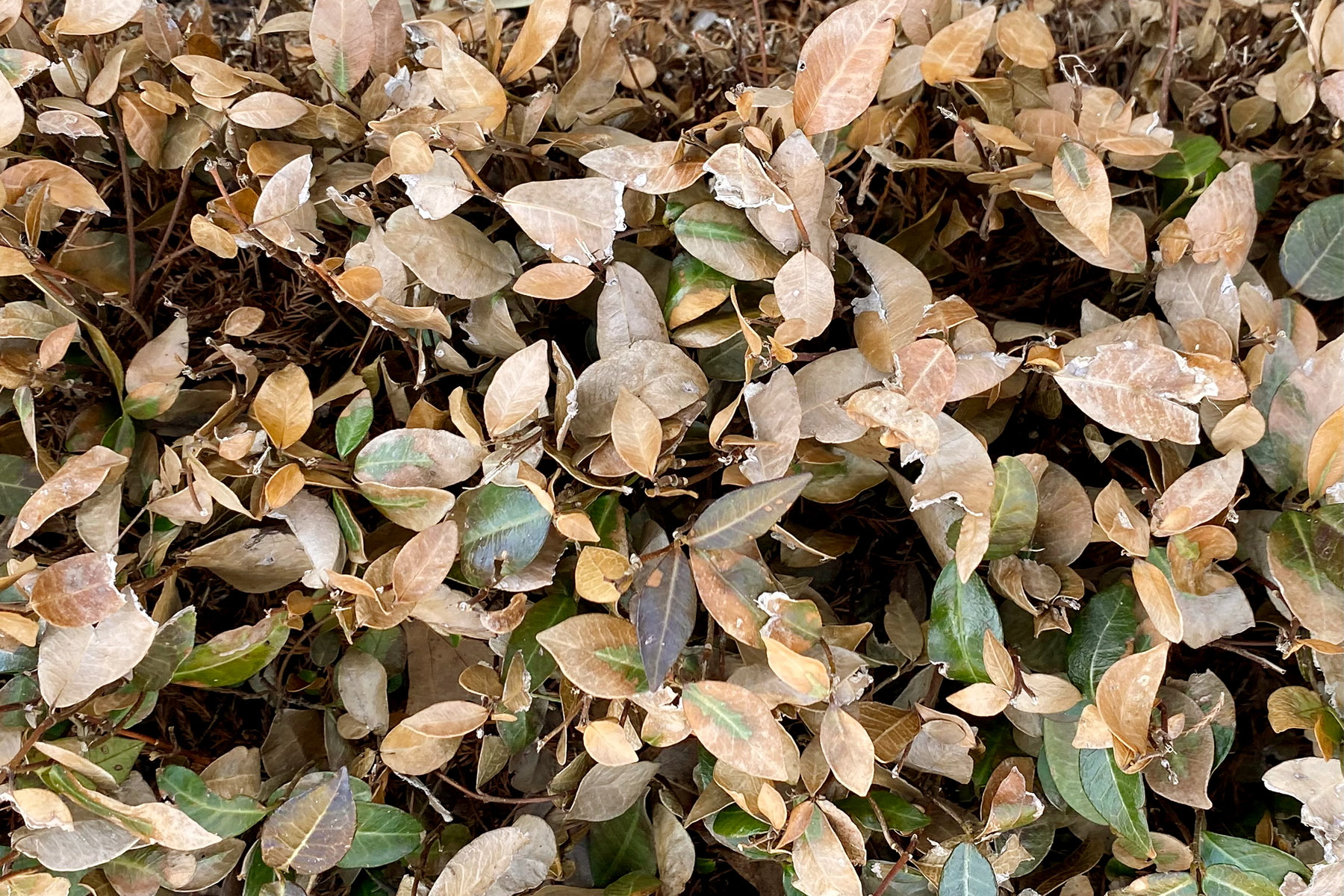 Asian jasmine will need a shearing or a mow. Give it a couple weeks though.
Christine Allison

Glen Bonick of Bonick Landscaping says that ground covers such as Asian jasmine, Berkeley sedge, and euonymus, all of which suffered a terrible frost-burn, will survive. “These can be sheared or mowed but don’t worry, they should come back. We usually fertilize mid-March to the end of March. Keep to that schedule, not just for ground cover but for all of your bushes and plants.” 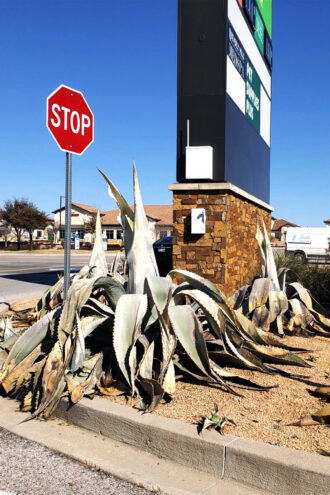 Side bets on these agaves?
Amanda Hammer

Fig ivy, which covers many exterior fences and walls, has always been susceptible to freeze but after the February storm it took a terrible hit. “Our recommendation is a two-step process for ivy: shear the plant back to the wall before removing the dead vines,” Bonick says. “Give it time to sprout. If a vine doesn’t sprout, then be sure to remove it. Don’t leave the dead vines behind.”

As for azaleas, they will be tricky, says Jason Osterberger of Jason Osterberger Designs. “Their soft tissue will have suffered internal damage and they’ll need to be monitored. On several properties I’ve toured, the woody stems are still scratching green which is a good sign. We suggest waiting another couple of weeks, and then applying an azalea fertilizer in hopes these beautiful plants will recover.

“Let your gardens sit and soak up the warmer temperatures. Make sure to keep your property well-watered. After the rain last week we should start seeing spring growth,” Osterberger says. Once we see some recovery, fertilize.”

Mark Ruibal of Ruibal’s Plants of Texas says pittosporum, Japanese aralias, loropetalum are going to struggle.”Everyone is going to get tired of seeing their gardens look bad, but it’s important to give your plants at least three weeks to recover. When you see light green leaves, you’ll know you’ve got a survivor. But give it some time.” 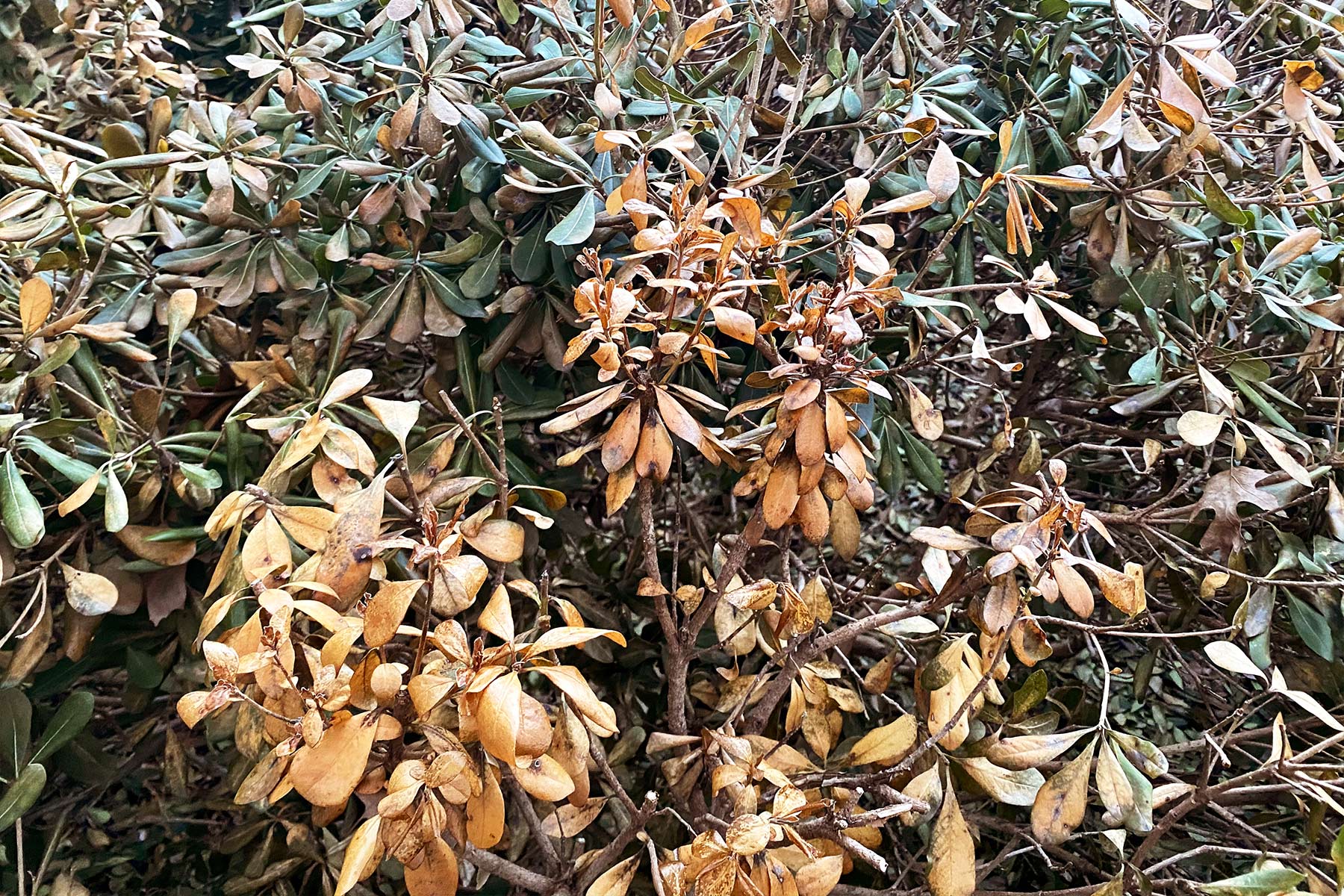 Mark Ruibal says pittosporums are going to struggle but if they were healthy to begin with, they should come back.
Christine Allison

Ruibal also says that next year, remember to water well before a big freeze, and in the fall to mulch at least a couple of inches deep to keep the ground warm.”Ground insulation will help to prevent the kind of damage we’re seeing this year,” he says.

“If one could say there was any silver lining to the storm, we were lucky that it hit as late as it did,” Bonick says. “Because spring is here now. We will be able to tell in two to three weeks what made it and what died, and replace plants where needed. Had it occurred in January we’d have had a long wait to determine which plants were survivors. ”