Today, we’re exploring an architecturally significant build nestled in Northern Heights. This neighborhood, located just minutes from Turtle Creek, was one of the birthplaces of Dallas’ modernist movement and is brimming with contemporary townhomes and duplexes.

3510 Overbrook Drive is a Cliff Welch original, built in 2015. Last May, the respected Dallas architect was one of five Texans selected from a national pool of 95,000 to join the American Institute of Architect’s College of Fellows. He is known for timeless modern builds with nods to the landscapes that surround them.

This home was designed for a noted photographer who traveled through Japan for decades. He lived in the neighborhood, and this build was a speculative project, built to sell rather than to live in. Still, the client “put his time, heart, and soul into it, just as if it were his very own,” says Welch. He presented Welch with a book of Japanese architecture by Yoshiji Takehara. “His work really spoke to us,” says Welch. “A lot of the things he was doing had to do with balance.” Takehara’s residential builds focus on harmony between contrasts: light versus shadow, natural versus man-made materials, and more. It’s an aesthetic that parallels Welch’s own, he says.

“Another parallel is that [3510 Overbrook] is a very tight site–it’s an urban area in the middle of the city,” says Welch. “In Japan, you’re also very limited on real estate. You’re surrounded on all four sides by things you don’t want to be looking out at. So, you create your own views. You bring in views of courtyards and plants. And the way the light comes into the room, the way that the shadows come through the trees and bamboo and play off the wall, that becomes your landscape.”

Though the property is now lush with foliage, only a few trees existed when Welch took on the project. One was rooted in the ground under the driveway. Rather than disturb its growth, Welch carved out a path for its roots in the cement. “The carve-out mimics the branches of the tree above it,” he says. “It’s a visual solution to a functional problem.” He also replaced the bamboo that grew around the property’s perimeter to give future homeowners an extra layer of privacy. 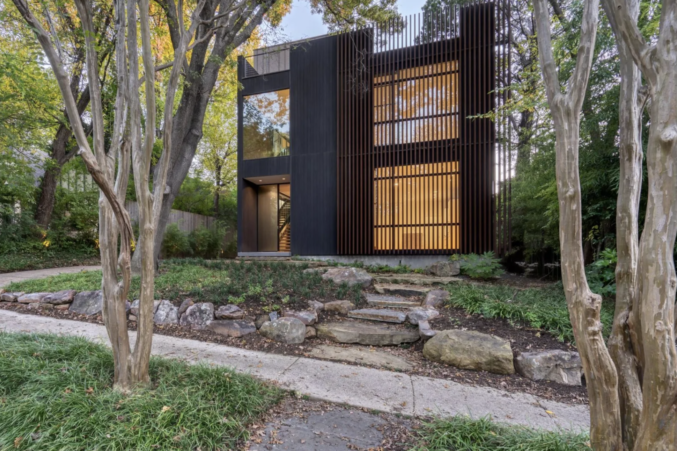 When crafting 3510 Overbrook Drive’s exterior, Welch blended steel, stucco, and wood to give the home a natural look that blends into the tree-laden background. The exterior was treated with an ancient Japanese technique called Shou Sugi Ban. The wood is burned, charred, wire-brushed, and then lightly sealed; the resulting tone is deep and moody. It’s also eco-friendly, says Welch–the treatment will keep the home looking new for years to come, as it prevents termites and rotting.

Then, instead of a traditional sidewalk, Welch used a series of flat natural stones. “It almost feels like an outcropping that was there the entire time,” he says.

The home’s interior, too, embraces both natural and man-made materials. A floating iron staircase, framed by a wall of windows, ascends into the sky. Beneath it, you’ll find gravel and rock elements. Welch played with water as well; a fountain in the entryway projects an immediate sense of calm.

Softly diffused sunlight is a staple at 3510 Overbrook. The main living area offers a sliding shoji screen for controlled lighting and extra privacy, and the white walls and wood floors reflect the dappled rays that flow through the leaves outside. 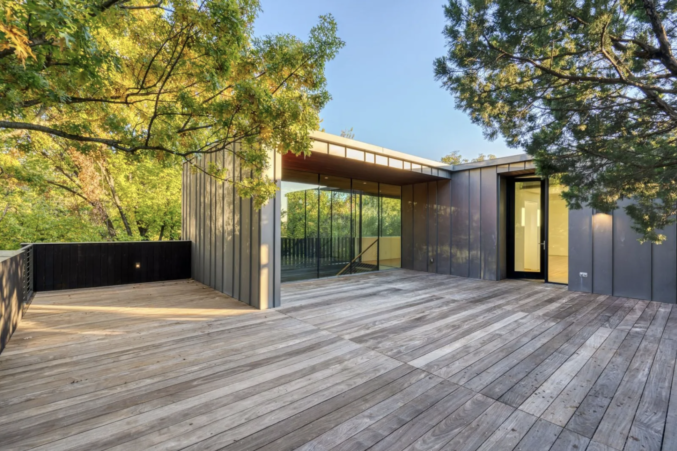 The kitchen is a minimalist’s dream, with white and chrome cabinetry accented only by a simple gray granite countertop. Upstairs, each of the three bedrooms is spacious and airy, and the primary suite offers a spa-worthy bathroom with treetop views.

Though the entire home is peaceful, the third level is the most zen of all. Here, a second living space opens up to a giant patio. Branches sway overhead, and the space is fully secluded from the neighbors and the rest of the home.

“Everything we do is modern, but we’re trying to do projects like this that will last for several generations,” Welch said. “Forty years from now, it’ll still be a good, modern building. We want our projects to last for as long as people want to live in them.”

Take a full tour of 3510 Overbrook Drive with the gallery below.