With just a cursory glance, you might wonder how 4608 Meadowood could come in at $15 million. It’s not like Charles, Prince of Wales, ever wrote a letter about how “appealing” it is, which has happened before. But imagine this: an architect you admire designs a stunning museum, such as the Dallas Museum of Art. You were a part of the group that helped select said architect, so you think, Why don’t I just have him design a modern masterpiece I can live in, as well? He can do it on four, park-like acres in Preston Hollow. That’s pretty cool, I think!

Another reason 4608 Meadowood deserves a second glance: there’s a lot more going on than meets the curbside viewer’s eye. What may look for four, distinctive towers from the street are actually interconnected areas of the home (representing the living, dining, and kitchen areas; a master retreat and den; family bedrooms; and a garage and guest quarters) linked with towering walls of glass and extending far below where the facade would lead you to believe (the front door is actually on the second floor). 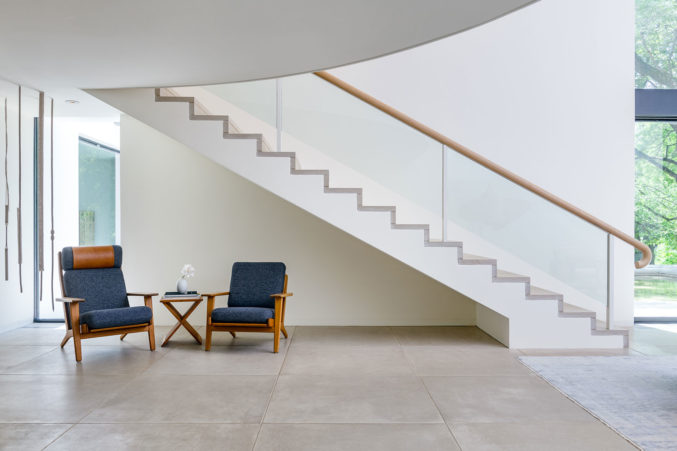 The unique, thoughtful nature of the exterior extends to every corner of the home’s nearly 11,000-square-foot interior, which features a chef’s kitchen with Bulthaup cabinetry, a striking limestone staircase that leads entrants to a high-ceilinged living room, a 42-foot art gallery, and a wine room that—though not pictured—is described on BriggsFreeman.com as “cozy.” The master retreat, like everything in the home, is beautiful but never fussy. The focus is more on natural materials and tree-lined views. (Though there is a particularly luxurious-looking marble bath situation in the master.)

We could go on, but no words (not even those of Prince Charles’) could ever really do this home and its 73-foot saltwater swimming pool justice.