A Year in New Dallas Shops

Growing up in Nashville, the shopping wasn’t the most exciting thing the city had to offer. Sure, there were cute boutiques and storied shops around town, especially if you knew where to find them, but we didn’t even get a Nordstrom until I went off to college.

Dallas, of course, is a different story. And this year in particular, it seemed like there was an epic opening practically every month. Here, we highlight the most exciting store debuts of 2017.

*We did not include new or second locations for established stores. We’d be here all day.

The Gist: Dallas’ most avant-garde store comes courtesy of its abroad-born founders, Fode Sylla and Ladislas Mande. The boutique showcases artwork, high-end home accessories, beautiful bespoke shoes, and fashion from emerging British brands—most of which are new to Dallas. “People in Dallas, when they see something good, they embrace it right away,” Mande said in D Magazine’s July issue. “That’s what sets it apart.”

The Gist: West Texas natives and sisters Lizzie Means Duplantis and Sarah Means have joined the family business (their cousins own Rios of Mercedes), putting their own spin on the cowboy boot. The duo are offering eye-catching designs ($900 to $3,400) and bespoke pairs, plus a stable of chic Western accessories, out of their chic Highland Park Village studio.

The Gist: A Moroccan-inspired dream project for longtime Gypsy Wagon employee Lindsey Munchrath is all wrapped up in an airy (and beatnik-approved) black-and-white interior, complete with a patio and fire pit. We dig it, man.

The Gist: Native Oklahoman Kristen Miller’s cheery, youthful boutique has been carefully curated with every occasion in mind. Shelves are styled with Rifle Paper Co. notepads, whimsical party goods by Meri Meri, colorful jewelry, adorable baby blankets, and man-approved bags, most for under $50.

The Gist: Sisters-in-law Veronica and Veronica Beard’s (just a coincidence) first boutique in Texas also happened to be their first outside of New York. The Highland Park Village jewel box showcases the duo’s iconic dickey jacket, along with the brand’s collection of American sportswear, plus cowboy boots and cacti in honor of their new location.

The Gist: The Australian skincare brand with an almost cult-like following opened up two beautiful locations on Knox Street and in the Bishop Arts District—with a third planned for NorthPark in 2018. Here are a few things locals were excited to scoop.

The Gist: The physical manifestation of Domino magazine can be found on Henderson Avenue, where Caitlin Wilson’s bright, eponymous line of wallpapers, fabrics, rugs, and furniture pieces live. Not only did Wilson decide to open up a second location for her store (her first brick and mortar is in San Francisco), but she also moved her family and design business from Portland to Dallas full time. 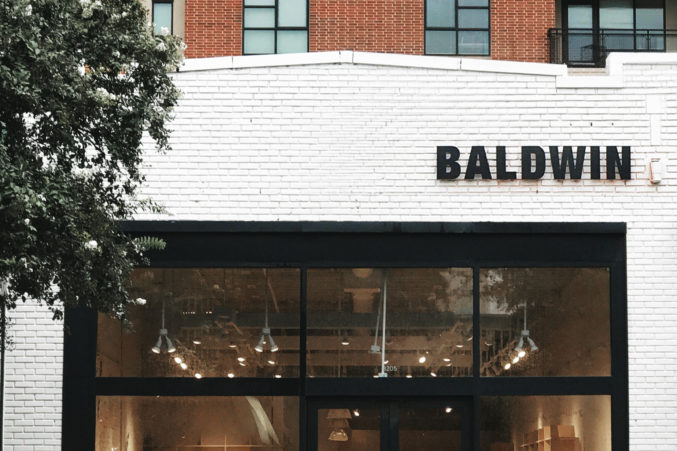 The Gist: Like the designer’s beautifully rendered eyewear, Garrett Leight’s Dallas store is something to see. The optical store boasts museum-white walls, an undulating beamed ceiling that mimics waves (a nod to the SoCal-native’s home), and an experiential lighting installation, inspired by artist James Turrell.

The Gist: Those who feared for the fate of Forty Five Ten’s original McKinney Avenue location were blessed with a Dallas design-lover’s dream when the space reopened as For Home Forty Five Ten. Headed up by Rob Dailey, Forty Five Ten’s home creative director, For Home  gathered some of the top talents of the Dallas design world (and just the world in general) to create ever-changing vignettes.

Neighborhood: Just outside the Medical District

The Gist: This fall, the Design District showroom is giving locals even more to discover cool art, refurbished finds, eye-catching new textile designs — with even better prices. The outlet is open 10am-5pm every Saturday.

The Gist: After teasing North Dallas with a pop-up this summer, The Gypsy Wagon set up a permanent sister shop, Roam Fine Goods, this fall. The travel-inspired shop offers the same relaxed, welcoming ambience of its Henderson Avenue counterpart but with more elevated offerings.

The Gist: Inside the McKinney Avenue space, shoppers can explore fully designed kitchen suites and spa-like bathroom vignettes. They can even see most products in action—from fully functioning showerheads to tricked-out tubs equipped with hidden speakers or bubble massage abilities.

The Gist: Austin-based TreeHouse has often been touted as the “Whole Foods of home improvement.” But with a quick tour around the 35,000-square-foot retail space at the corner of North Central Expressway and Walnut Hill Lane, you’ll soon realize there is a range of products, whether you’re dipping a toe in sustainable homewares or preparing for a full remodel.

Light Up Your Home with These Off-the-Wall Candles

Toss those boring white tapers—candles of all shapes and colors are sparking a moment.
By D Home
Designers

Dallas designers tell us the styles they’re betting big on for the new year.
By Jessica Otte
Designers