The Leapfrog Hospital Safety Grades look at 2,901 facilities across the country. The national nonprofit has been collecting and analyzing published hospital data for 20 years where it evaluates safety, quality, and resource use in order to improve the industry. The grade uses 30 national performance measures from Centers for Medicare & Medicaid Services, the Leapfrog Hospital Survey, and information from other data sources. These measures are combined to create a letter grade representing the hospital’s ability to keep patients safe and avoid medical errors. Employers and payers use the data to guide their employees to the hospitals that will provide the best, most efficient care.

DFWBGH is a a regional group of 65 large and mid-size employers focused on improving healthcare quality, cost, and outcomes. Members spend $4 billion each year caring for 850,000 employees, and include American Airlines, Celanese, Greyhound Lines, Southwest Airlines, Texas Instruments, and the City of Fort Worth.

The organization looked at 225 hospitals in Texas and 63 in North Texas. Seventeen hospitals earned As, 16 Bs, 25 Cs, and four Ds and one F. The hospitals earning an A grade in north Texas are: 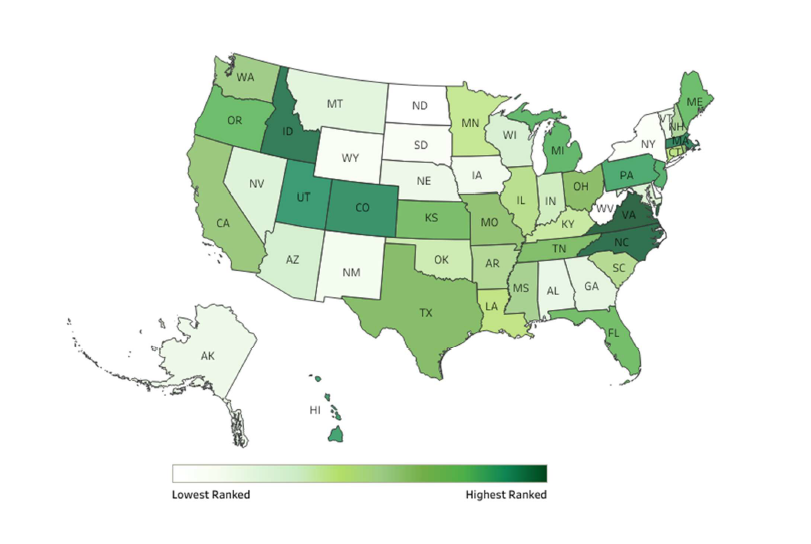 The darker green states have a higher percentage of hospitals that received Leapfrog’s A grades (Courtesy: The Leapfrog Group).

So how do employers get their employees to the top hospitals? The task isn’t easy. Most people are not used to shopping for healthcare, and would rather use proximity or personal recommendations than the data. But as costs go up, employers are being forced to use data like this to incentivize employees to use higher performing facilities. Benefit plans may be made cheaper by the employer if the network is restricted to the better ranked hospitals, though that risks causing backlash from employees who might have to pay more to go the physician or hospital they previously went.

Employers are getting smarter and smarter in how they’re using their plans,” says Marianne Fazen, CEO of the Dallas Fort Worth Business Group on Health. “Employees are spending a whole lot more time studying their benefits than they did in previous years.  Employers are able to sell deals that make it good for the employer as well as for the company to choose more wisely for their health care.”

But overcoming set behaviors can be difficult. “If the hospital is high priced with name recognition, it should have high quality, but in fact that’s not the case,” Fazen says. “It’s our job as a coalition to help them understand that they’re not all perfect out there, and there’s some reliable measures to find out how perfect they are or how bad they are. It’s hard to change minds when they say ‘My friend went here or there’ or ‘I live close to this one. It’s a good hospital.’ It’s hard to change the branding.”

You can search your local hospital here.