Moving From Pandemic to Endemic in North Texas

Between new variants and vaccine resistance, experts are beginning to see the pandemic differently. It looks like COVID-19 may be with us in some form for years to come. How might that impact how we live and how the medical industry treats the virus?

While the delta variant has kept us in the throes of the pandemic for now, it is looking like we will soon be moving to the endemic phase of the disease. An endemic is a disease that consistently exists in a people group or area. Malaria is considered endemic in certain regions around the world. It exists and can harm and even kill people, but it doesn’t wholly disrupt or shut down society. In many ways, our country is already there.

“We are starting to hear more discussions about transitioning to what we would call an endemic phase, where it’s around, but we don’t see large outbreaks,” says Dr. James Cutrell, an internal medicine physician at UT Southwestern and the infectious disease fellowship director. “The chances that this virus was ever going to be completely eradicated were very low.”

Vaccine resistance and variants aren’t the only culprits. COVID-19 can move into animal populations, where it can continue to exist undetected until a human comes into contact with an infected animal. From there, he or she begins to spread the disease among a population with no immunity. With other conditions like smallpox, society eradicated the virus because it only infected humans. So with enough vaccination in the human population, the disease disappeared.

In the United States, the flu could be considered an endemic, though Cutrell stressed that COVID-19 is less likely to mutate than the flu, where the medical system tries to predict which strain of the flu will be most prevalent and rolls out the new flu shot each year. “The vaccines that we have for COVID are much more effective than vaccines that we have for flu,” Cutrell says. “I don’t anticipate a long-run scenario where you have to get a new COVID shot every single year.”

The U.S. is likely to reach endemic status before other places because of its access to the vaccine. Vaccinations are up in Dallas, and the Dallas Morning News reported that in the week ending August 22, nearly 50,000 doses of the vaccination were administered to Dallas County residents. Five weeks ago, that number was about 28,000 doses per week. Vaccinations continue to be the best way to prevent severe infection and hospitalization. As you can see in the graphic below, only a small fraction of Parkland patients with COVID-19 are fully vaccinated. 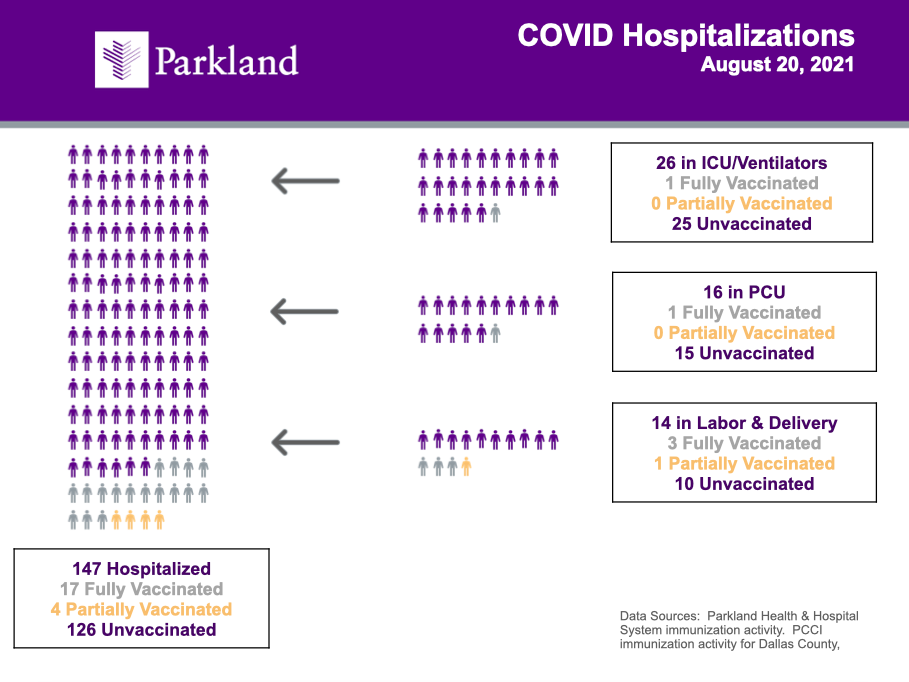 Of the 5,600 vaccinated patients that have been diagnosed at Parkland, only 179—3.2 percent—were hospitalized, and only 21 of those died due to COVID-19. Of all the cases at Parkland, only 15 percent have been so-called breakthrough cases. As the number of vaccinated individuals increases, breakthrough cases will make up a larger percentage of cases even as the total number of cases goes down, Cutrell says.

Treatments like monoclonal antibodies are another way to move into the endemic phase. If the disease can be treated effectively, then there is less societal fear of its spread. In theory, treatments could improve so that a COVID-19 case is treated as a case of the flu. The therapy, taken by both Governor Greg Abbott and former President Donald Trump, has been shown to prevent hospitalization in 70 percent of infected patients. The state is ramping up its efforts to spread the word about the treatment. “They can be a bridge until someone gets vaccinated or until a high enough number of people are vaccinated,” Cutrell says. “It is still underutilized because I think some doctors don’t know about it, and many patients may not know that it’s available.”

Even with improved treatments and increasing vaccinations, Cutrell emphasized using all the tools to prevent the spread and keep the community safe. “Being fully vaccinated is having an umbrella. If you use an umbrella and you go out, and it’s sprinkling outside, that umbrella is going to keep you dry. If you go out in a driving rainstorm, or if you keep doing that every day, you know, that umbrella is going to keep you from getting so wet, but you might still get a little bit wet,” he says. “To keep myself dry, I’m going to put on a raincoat in addition to the umbrella. That would kind of be wearing a mask when I’m out in a public setting, even though I’m fully vaccinated, to give myself another layer of protection from getting infected.”

The fourth wave's peak is expected to be lower due to increasing vaccinations. 3,872 new cases added over the weekend.
By Catherine Rosas
Coronavirus

Experts say that delta variant, not omicron, is still the main concern this holiday season.
By Will Maddox
Coronavirus

UT Southwestern sequencing has identified the omicron variant. The loneliness pandemic is growing.
By Will Maddox
D Magazine Directories