As vaccinations slow, public health officials are delaying the expected date for when at least 80 percent of Dallas County will have COVID-19 immunity.

The Parkland Center for Clinical Innovation defines “herd immunity” as when 80 percent of the local population will be vaccinated against, or have antibodies for, COVID-19. PCCI has been a leader in mapping vulnerability for various ZIP codes and other specific populations throughout the pandemic. It originally expected Dallas to reach herd immunity in early June. That date has now been pushed to late July.

Only about 15,000 people in Dallas County are getting their first doses each week, despite federal guidance allowing ages 12 to 15 to receive their shots and efforts to increase vaccine availability. Daily vaccinations peaked in early April, at around 100,000 per day. In total, a little more than 1 million people in Dallas have received at least one dose and about 800,000 have been fully vaccinated. That means 40 percent of the county—52 percent of those over 18 and 77 percent of those over 65—have had at least their first dose.

There is still some question about whether herd immunity is a realistic goal for the nation, and there is disagreement about the point at which herd immunity occurs. The focus has shifted to getting as many vaccines out as possible. Experts say that vaccinating the most vulnerable could mean life returning to normal for most people, even though the vaccination rate is slowing.

“The most critical factor in the fight to crush COVID remains vaccinations for the whole population, particularly with the county’s younger, working population and the recently approved high school and middle school students,” reads a statement from Steve Miff, PCCI’s president and CEO. “Convenience, missed work or school from vaccine side-effects, and concerns about providing identifications for the transient and un-documented populations remain key barriers to vaccinations and continue to be a key decision driver for the 20–30 percent of the unvaccinated population who are not opposed to receiving a vaccine, but who have not yet rolled up their sleeves.”

The good news is that 26 Dallas ZIP codes are estimated to have 80 percent immunity, as seen below. In Dallas County, northern and western ZIP codes have had higher immunity rates, though there aren’t many demographic patterns in the data. Stopping the spread of the virus will not only reduce hospitalizations and deaths, but will also limit the virus’ ability to mutate and create a variant that might be more resistant to treatment and vaccines. 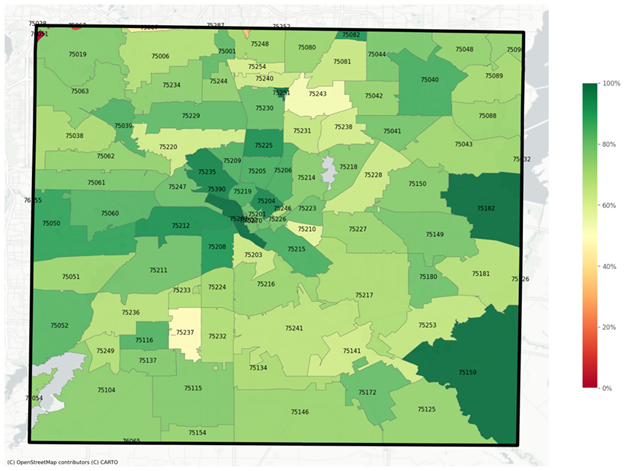 Efforts from public health officials to increase vaccinations are ongoing. In Fort Worth, the health department has launched mobile vaccination sites that employers or owners can request. In Dallas, the county, city, and Parkland Health & Hospital System are wrapping up 29 community vaccination locations at schools, pharmacies, physician offices, or neighborhood centers. PCCI’s vulnerability index has identified the top 100 neighborhoods with the most unvaccinated individuals. There are low vaccination rates across north and central Dallas County, but large swaths of southern Dallas County remain unvaccinated. These are also areas that struggle with access to healthcare and transportation in general. 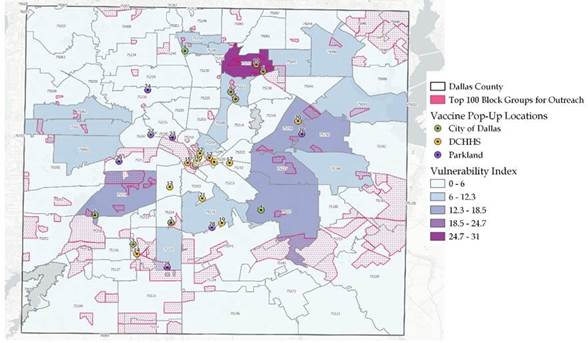 “The virus will continue to linger in the background at relatively low and steady rates, with the periodic flareup. The best thing we can do is continue to vaccinate to reach, and surpass, the 80 percent vaccination mark and then drive both personal and community protection through the vaccines,” said Dr. George’ Holt’ Oliver, vice president of clinical Informatics at PCCI, via release.