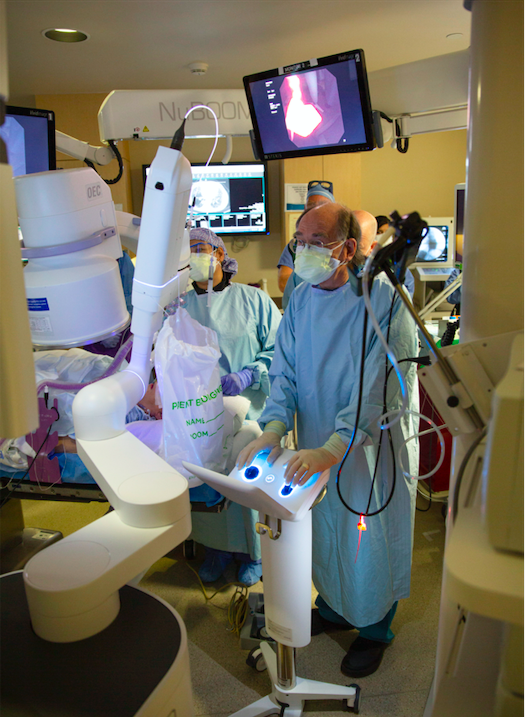 Dr. Burk at the controls (Courtesy: Texas Health Fort Worth)

Texas Health Harris Methodist Hospital Fort Worth is the first in North Texas to offer Ion, a new robotic-assisted technology for detection of lung cancer in stage I and stage II.

“It’s changed the whole concept of how and when we can diagnose lung cancer,” pulmonologist at Texas Health Fort Worth Dr. John Burk said via release “If you can diagnose earlier, you can treat earlier. We think that will improve five-year survival rates and potentially save lives.”

According to the American Society of Clinical Oncology, 19% of people with any stage of lung cancer survive just five years, and lung cancer is the second most common cancer in men and women. The robotic system is designed to biopsy potential lung cancer tumors earlier than traditional tests and to access difficult to reach areas such as the corners of the lung. Controlled by the doctor, the robot passes a very thin catheter through the endotracheal tube into the lung of a patient under general anesthesia. Using a planned navigation path to aid, the robot then guides the catheter to the lesion, a round or oval shaped growth in the lung, which appears on a computerized tomography (CT) scan. Because of the camera inside the catheter, the clinical team is able to view inside the lung from a computer. After using the catheter to obtain the nodule, the physician will give it to a pathologist. The whole outpatient procedure is around two hours long.

“We are able to see things we’ve never seen before and get to the corners of the lung that were previously inaccessible,” oncologist at Texas Health Fort Worth Dr. Rohan Gupta said via release.

A primary care physician usually recommends a CT scan for a patient with a history of smoking or other pulmonary issues, which might show a spot on the lung, and it is often nickel or dime sized. If the physician wants to check for bleeding post-accident or another heart issue, he or she typically gives the patient a chest scan, which may reveal similar growths.

But most patients who have small lesions on their lungs are asymptomatic. If either scan finds nodules, it is up to the patient to decide his or her next course of action. The patient has the choice of three options: wait to see if the spot grows; remove it if possible; undergo a needle biopsy or bronchoscopy, a procedure, which gives a doctor the ability to see in the lungs, take a part of the growth to determine whether or not it is benign, and then possibly remove the lesion if it is malignant.

“This new tool will help us have a low complication rate and a very high success rate in diagnosis for small lesions,” Burk said. “The key is that we’re able to biopsy the growth and immediately see if it’s cancerous, then remove it if it is.”

The director of nursing for medical surgical renal oncology at Texas Health Fort Worth, Dr. Kirsten Drake considers the system a life-changing experience for patients. “Many times, patients had to worry and wait to see if a nodule grows to a size that can be biopsied,” Drake said via release “Now, they don’t have to.”