The number of urgent care centers is skyrocketing nationwide, with 44 percent growth in the last five years according to a Cushman and Wakefield report. A combination of convenience and cost have pumped up demand, and between 2006 and 2016, urgent care volume increased by a factor of 18, while emergency room volume tripled during the same period.

There are more than 200 urgent care centers in Dallas-Fort Worth, but in Texas, where there is already a healthcare shortage. There are lower than average number of urgent care centers per capita for residents over 65, meaning there may not be enough clinic capacity for Texas’ population. Because of their convenient locations, low cost, and extended hours, these centers have become more attractive, and have proliferated in rural areas where hospitals are increasingly rare. With Texas’ aging population, the state may not have enough care facilities to adequately treat everyone, but urgent care centers may provide an answer.

In the next 11 years, the report says, 3,340 new urgent cares will need to be built to keep up with the aging population nationwide. Around half of those new locations will need to be in Texas, Florida, California, Pennsylvania and Illinois, where the senior population is expected to grow by 52 percent by 2030.

“The proliferation of urgent care facilities in both North Texas and nationally is driven by patients who demand to be treated like customers as they seek the highest care that is convenient and affordable,” says Chris Barnet, Executive Director and part of the Healthcare Advisory Group at Cushman & Wakefield.

Over the last two years, urgent care centers have grown 12 and eight percent year over year, and there are nearly 9,000 such clinics around the country. The report highlighted pediatric care, with more than 22 percent of urgent care claims associated with children, compared to 10 percent to retail clinics, and just 15 percent in emergency rooms.

For many ailments, urgent care centers are an antidote to the high costs and surprise bills associated with proliferation of freestanding emergency rooms as well as out-of-network emergency physicians operating out of in-network hospitals. Data from the Texas Association of Health Plans says that 30 percent of all ER physician services are out of network, even though 65 percent of those services occur at hospitals that are in network. Freestanding emergency rooms account for 83 percent of all out-of-network emergency room services, resulting in $3 billion a year in avoidable costs.

The report compares the costs of the causes of the nine most common emergency room visits, urgent care centers range from 72 to 83 percent of the cost of an emergency room. 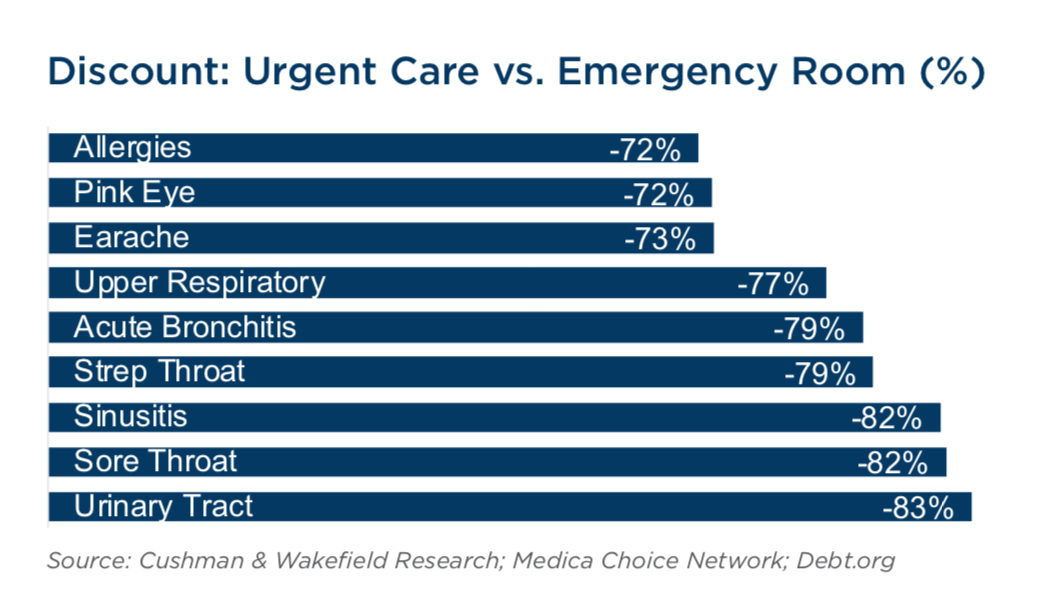 A study from Deloitte is quoted in the report, and says, “Markets with a higher concentration of urgent care centers  have lower ER visit rates. UCCs are sparse in markets with higher ER visit rates, most of which have larger uninsured and Medicaid populations. However, more UCCs are accepting the new Medicaid enrollees and may be emerging as an alternative to ERs.”