In Dallas County, the shortage of primary care physicians is expected to grow by 90 percent in coming years, according to a Dallas County Health and Human Services Community Health Needs Assessment.  This complication is compounded by the fact that 60 percent of the ZIP codes in Dallas County are described as places with great “challenges and opportunities for addressing health disparities.” A tall test awaits the North Texas healthcare industry.

The report dives deep into a number of health indicators, from sexually transmitted diseases and mortality to housing and physician shortage. Many of the disparities that exist in the county are well-documented. Dallas is the least insured big city in the nation, and has life expectancy disparities that span multiple decades. The report highlights the familiar divisions separating the northern and central portions of Dallas County from the sweeping crescent of poverty, shoddy mental health, poor social determinants of health, and negative health outcomes that encompass the rest of the region.

“One does not have to look deep into the health data of Dallas County to recognize that significant disparities exist among the population and the geography of these disparities is readily apparent,” the report states. “While much of Dallas County benefits from a strong economy, there are several geographic areas that struggle with severe poverty or pockets of economic instability and the social ills that accompany a lack of resources including significant health disparities. Many of the ZIP codes within these underserved areas have suffered from the disparities for decades.”

A handful of ZIP codes were present in virtually every negative health indicator, which are mostly in southern and southeastern Dallas County. These ZIP codes are 75210, 75216, 75217 and 75241, among the sickest ZIP codes in the region. In the map below, the general health needs of each ZIP code are reflecting the division of Dallas County between north and south that repeated for nearly every health measure. 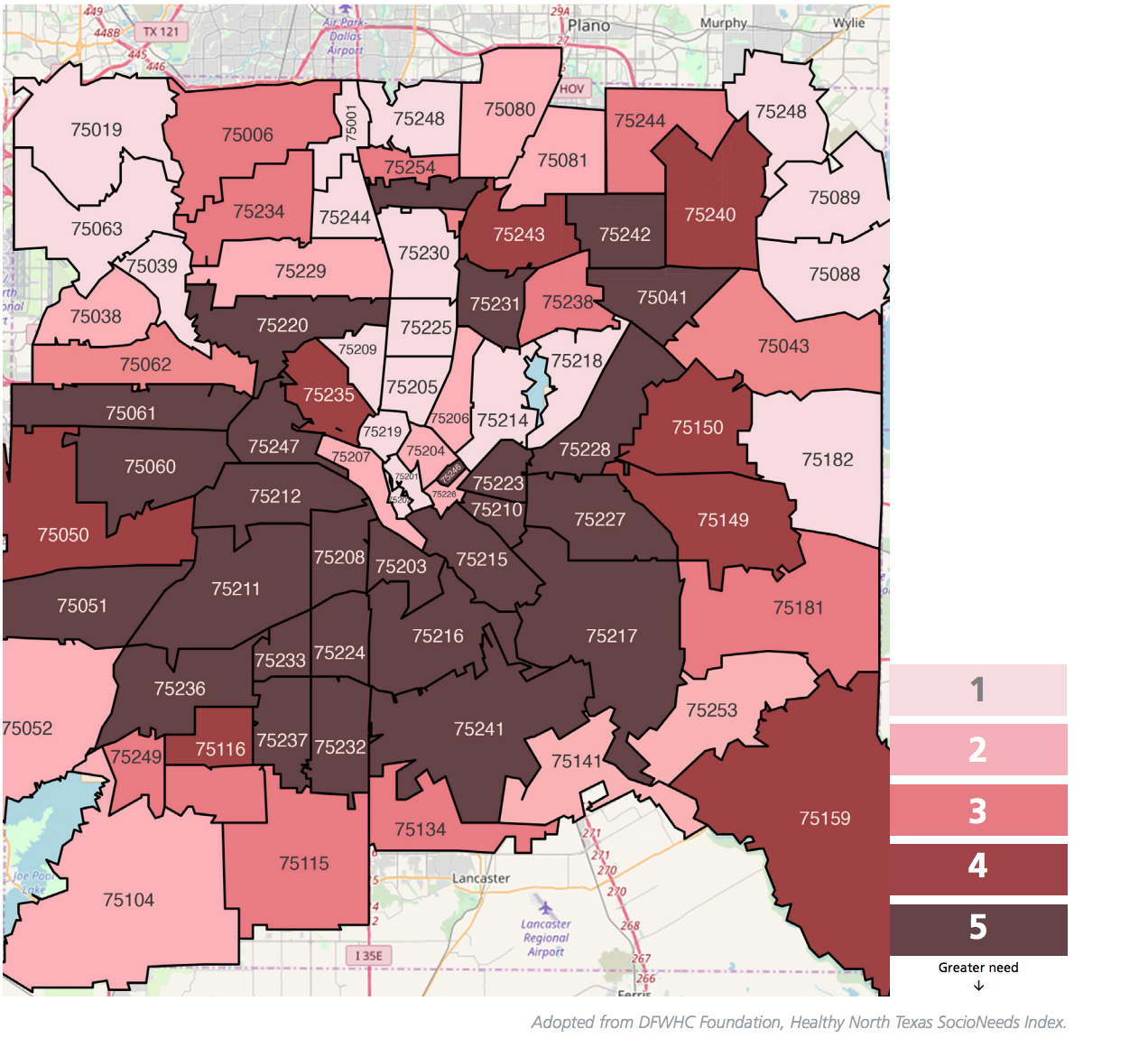 The report also highlights a growing problem in Texas statewide: primary care physician shortage. While this is usually more of a rural issue, Dallas County is set to experience its own lack of of primary physicians. It’s ratio of population to primary care physicians’ is currently 18th among Texas counties. Demand is expected to outpace supply between now and 2030, growing the primary care shortage by 90 percent in coming years.

The report also details Dallas’ nation worst insurance rate, which is impacting all races and ethnicities, though some are less insured than others. Dallas County sits below state and national averages for uninsured residents for every racial and ethnic group measured in the study.

The report was created as a collaboration between Parkland Health & Hospital System and Dallas County Health and Human Services, who are working on initiatives to address the priorities identified in the report, even though many of the disparities have root causes beyond what a health system can address.

“The only way to effectively address health disparities in Dallas County is to employ a collective impact approach that brings together community stakeholders with a common mission,” said Teresita Oaks, a director with Parkland’s Community Health Institute via release. “Neither Parkland nor the health department can solve all of the issues contributing to health disparities in Dallas County. This effort will require collaboration among multiple government agencies, as well as community-based organizations and private industry. Between now and January, Parkland and DCHHS will be reaching out to these stakeholders and asking for their input as well as what they feel they can contribute to reducing health disparities”