The 2019 Review of Physician and Advanced Practitioner Recruiting Incentives analyzed results from a survey of 3,131 physician and advanced practitioners conducted over the last year. Merritt Hawkins is a national search and consulting firm focusing on the recruitment of physicians for all medical specialties.

The results indicate that the number of searches for medical specialists is trending upward while fewer searches are taking place for primary care physicians than in recent years. Last year, 78% recruiting assignments were for medical specialists, jumping 67% from four years ago. In contrast, the searches for primary care physicians such as family doctors, internists, and pediatricians declined by 38% from four years ago.

Reviewing the new trends in physician supply and demand, the Association of American Medical Colleges (AAMC) projects a shortage of up to 121,900 specialists by 2032. These projections include shortages of 55,200 primary care physicians and up to approximately 67,000 specialists. Among specialists, the projections demonstrate a shortage of up to 23,400 surgical specialists and up to 39,100 internal medicine and other sub-specialists. Physicians who fail to enter or finish their residency factor into the shortage, generally connected to the cap Congress placed on federal funding for physician graduate medical education in 1997. While the recent numbers of U.S. medical school graduates has increased by 30% from 2006 to 2016, the number of resident positions increased only 14%, according to the AAMC’s 2017 State Physician Workforce Data Book.

Another factor affecting physician supply is the percentage of aging physicians currently in the workforce, quickly approaching their retirement years. The Review warns that some states have over one-third of physicians who are 60 years old or older, with New Mexico, Hawaii, New Jersey, Montana, and Maine in the most danger, progressively. Utah, North Carolina, Minnesota, Texas, and North Dakota remain the states with the lowest percentages of physicians aged 60 or older.

While these factors continue to threaten physician supply in the coming years, there is a growing demand for physicians generated by the aging population. In 2030, U.S. Baby Boomers will all be 65 or older and by 2035, there will be 78 million people in the U.S. who are 65 or older, while just 76.7 million will be younger than 18. the first time that senior citizens will outnumber children in U.S. history. The 78 million seniors with access to health insurance will be the primary source for rising physician demand. There are around 7,300 certified geriatricians in the U.S. today and the American Geriatric Society projects that 30,000 will be needed by 2030.

Merritt Hawkins report also revealed that for the fourth year running, psychiatry was the firm’s second most requested search, underscoring the need for psychiatric care nationwide. In addition, a study published in Arthritis Care & Research projects a demand for rheumatologists supply to grow more than 100%. There is also a foreseeable shortage of specialists in infectious diseases, with deaths due to drug-resistant pathogens predicted to rise rapidly. “The shortage of medical specialists flies under the radar, but it is a serious public health concern that deserves more attention,” said Travis Singleton, Executive Vice President of Merritt Hawkins via release. 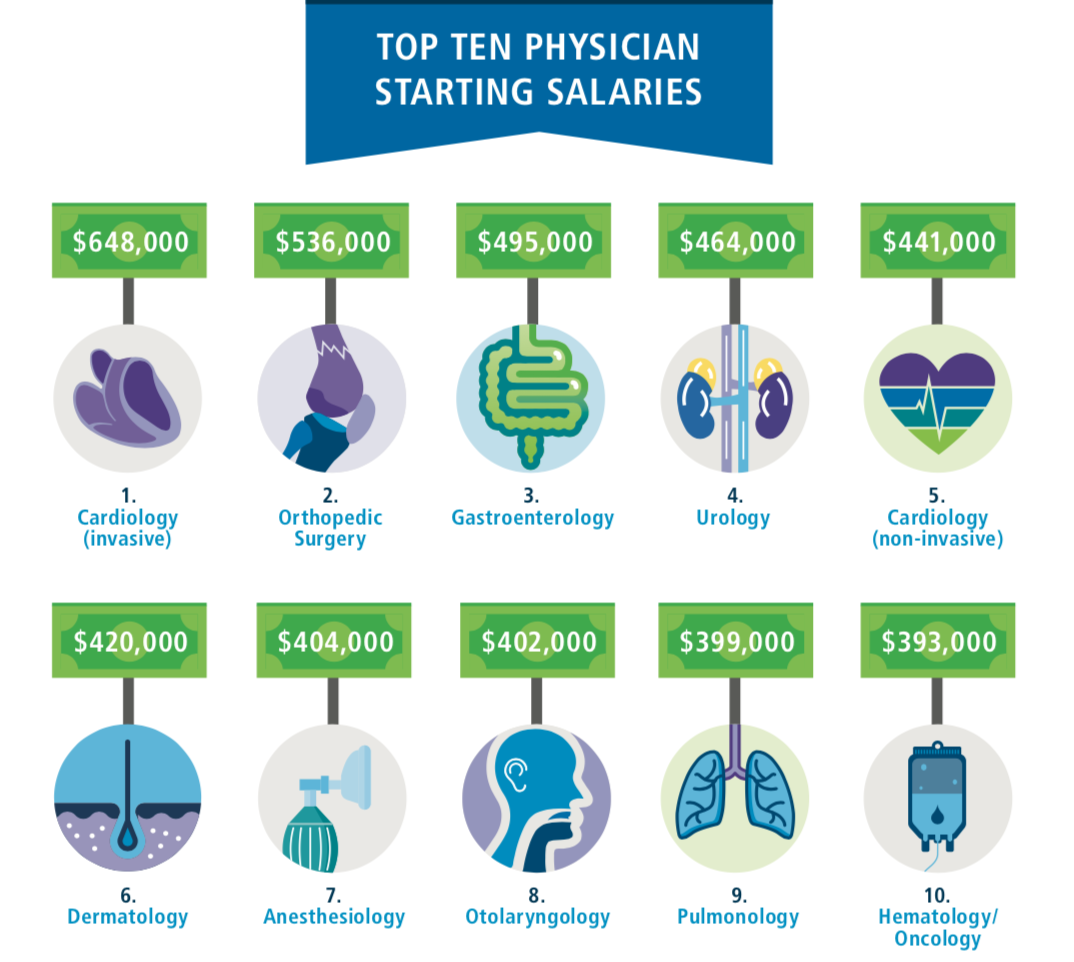 Highest Starting Salaries and a Rise in Value Based Payments

Invasive cardiologists have the highest average starting salaries tracked in the report at $640,000, with orthopedic surgeons following with $536,000, gastroenterologists at $495,000, and urologists at $464,000. At the lower end of the pay scale are family physicians, averaging a starting salary of $239,000. On average, the signing bonus of offered to physicians is $32,692, according to the report. Regionally speaking, the 2019 Review indicates that physician salaries tend to be lowest in the Northeast and West while they are highest in the Midwest/Great Plains, Southeast, and Southwest. For the Southwest, the average starting salaries for top five most requested physician specialties are as follows:

The report also suggests that value-based physician payment is becoming more common. Of the Merritt Hawkins clients offering physicians a bonus last year, 56% were based in whole or in part on metrics that were value-based. This means that physician bonuses were contingent on patient satisfaction, adherence to quality, reduction of hospital readmissions, adherence to use of electronic health records, and cost reduction. Overall, value-based payments have grown 43% in the last year and 39% over the last two years.