The only trouble physicians have finding a job is choosing between numerous options, according to a new survey from Dallas-based physician search firm Merritt Hawkins.

“Physicians coming out of training are being recruited like blue chip athletes,” said Travis Singleton, executive vice president of Merritt Hawkins via release.  “There are simply not enough new doctors to go around.”

Primary care and specialty areas were both inundated with career options, with 69 percent of primary care residents, 69 percent of internal medicine subspecialists, and 64 percent of surgical specialists receiving more than 51 offers. The number of offers is reflective of a physician shortage, as a study from the Association of American Medical Colleges showed that the country would be short 122,000 physicians by 2032, which is partly limited by the federal cap on spending for training doctors.

“We need more primary care physicians to implement emerging healthcare delivery models that are based on enhanced access, prevention and quality,” Singleton said via release.  “But we also need more specialists to care for America’s rapidly aging population.”

In rural communities, where the physician shortage is already being felt, the outlook doesn’t look good. Only one percent of medical residents would prefer to live in communities of less than 10,000 people, and only two percent wanted a community of 25,000 or fewer. Sixty-five percent want to live in a city of more than 250,000. There may be hope in international recruitment, as international medical graduates are more likely to prefer smaller communities than American graduates. 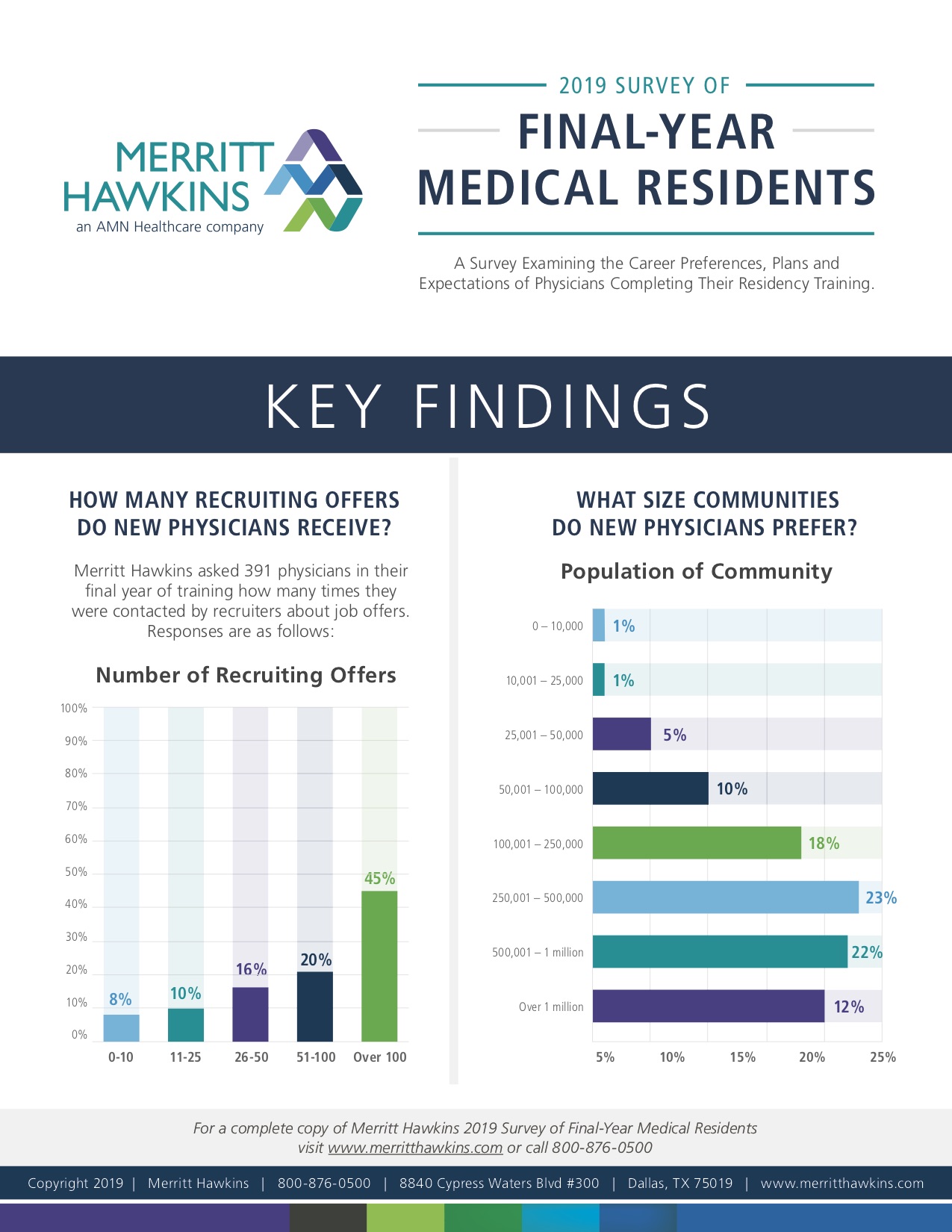 Just two percent graduating residents are interested in starting their own practice, while 43 percent would prefer to be employed by a hospital.  “The days of new doctors hanging out a shingle in an independent solo practice are over,” Singleton said via release. “Most new doctors prefer to be employed rather than deal with the financial uncertainty and time demands of private practice.”

Even though there is an active job market for physicians, nearly one fifth said they would not choose medicine as a career if they could do it over, “With high levels of physician burnout and continued uncertainty about the direction of the healthcare system, many doctors are under duress today,” Singleton said via release. “It is not surprising that some newly trained doctors regret their choice of a career.”