The latest version of Allan Baumgarten’s Texas Health Market Review came out this year, revealing enrollment, profit, and marketshare for Texas’ Health Plans for 2017. Some plans appear to be raking in the cash, while others are losing millions of dollars.

First, let’s look at what the review says about insured rates in Texas, which has the greatest percentage of uninsured people in the nation. According to the report, Texas’ uninsured rate decreased from 21.9 percent in 2013 to 17.3 percent in 2017, though it ticked up from 16.9 percent since 2015. Texas is one of 14 states that hasn’t adopted the Medicare Expansion initiated by the Affordable Care Act.

A little over half of the 27.1 million people in Texas have private insurance (56.1 percent) rather than public or none at all, and half of the state gets their insurance from their employer. Only around 6 percent purchase insurance individually, while over a quarter of the state has public insurance. Over 13 percent is on Medicare, with the same percentage on Medicaid/CHIP.

According to the review, business was good for insurance companies in 2017, who collected over $62 billion in health premiums in Texas, compared to $50 billion in 2015. When it comes to marketshare in Texas, UnitedHealthcare edges out Blue Cross Blue Shield of Texas as the largest health plan in Texas in terms of premium revenues. United has 20.7 percent of the market while Richardson-based Blue Cross has 20 percent. Humana has nearly 10 percent, with Aetna and Cigna coming in a little over 5 percent. 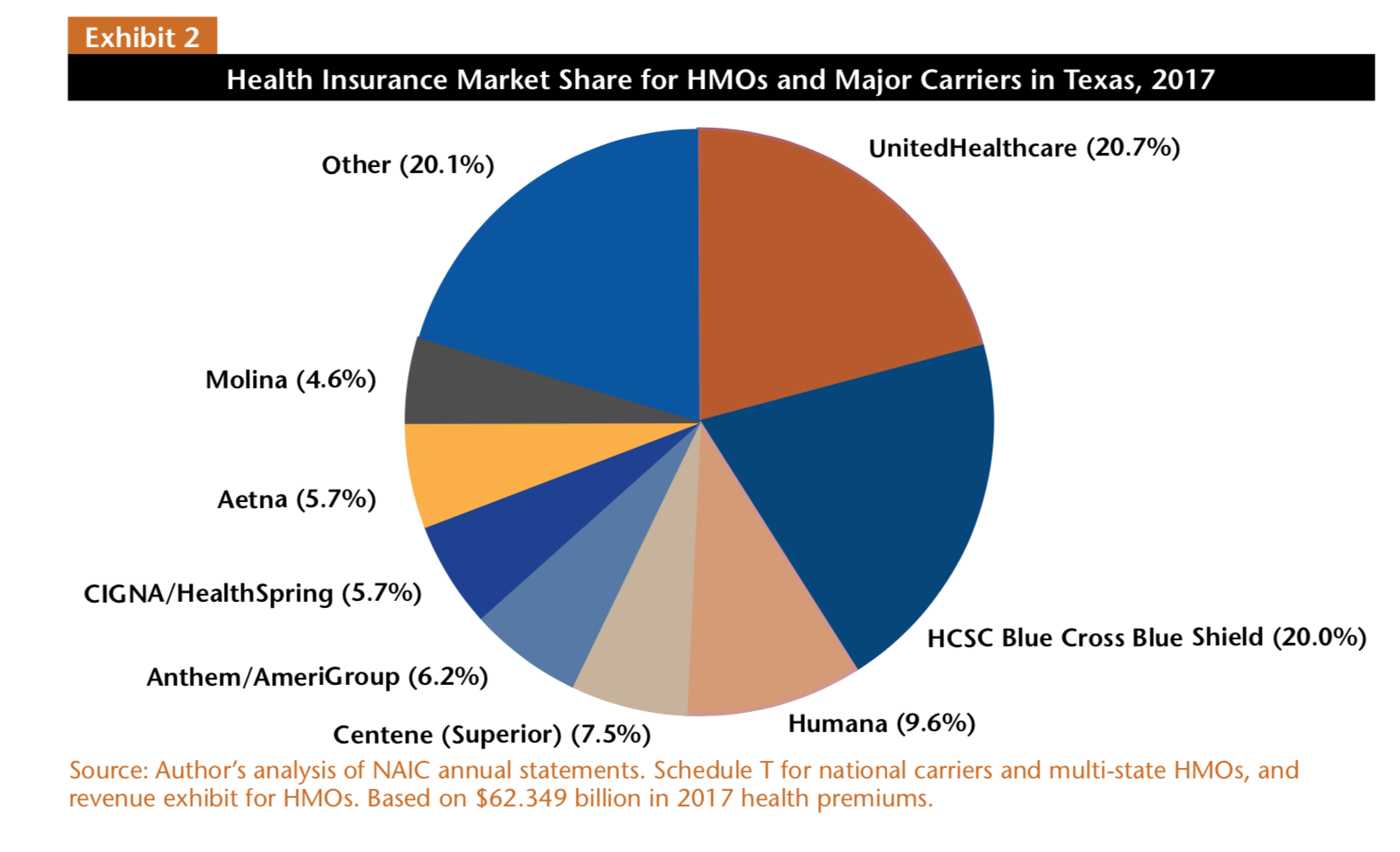 In terms of HMO plans based in North Texas, some companies are prospering while others are struggling, though some of the profit disparity is due to the types of individuals being insured and whether the plans include medicare or medicaid plans. Data from the review for North Texas HMO plans are listed below, with their enrollment, income, and profit margin for 2017.

Baumgarten explains some of the discrepancies in the Children’s profit losses. “Children’s Medical Center Health Plan is a relatively new plan which has a contract for the STAR Kids program in the Dallas area. That means they are managing care for a population with significant medical needs, including some persons with developmental disabilities living in group homes. The per member per month premium from the state is high, about $2,105 per member per month. However, the medical spending is about $2,247 PMPM, meaning their is a gap of $142, without considering administrative expenses. Even on a small population (about 9,500), that’s a lot of money to lose.”

But it isn’t all bad news for the plan. Baumgarten continues, “A possible silver lining – I assume that the health plan is paying Children’s Medical Center physicians and other professionals to provide a significant portion of the care the enrollees receive. So that is revenue to the hospital, which had strong profits in 2017.”
For Blue Cross, Baumgarten noted a revenue issue.”[BCBS] also had a large loss on Medicaid, not because they were serving a population with significant medical needs but because were paying out $1 for medical expenses for every $1 they took in premiums. They also reported a large loss on their commercial business, though less than in 2016.”

The study also noted an increase in provider-sponsored health plans, which it attributes to the move away from fee for service in the healthcare field. In an analysis of these provider plans, the report reads, “The short answer is that most were not doing well, and several provider systems soon ended their ventures . They should have improved their care management capabilities before taking on the significant financial risk of owning an insurance company.” It noted the Memorial Hermann HMO and insurance company, which exited the insurance market after just a few years. Memorial Hermann ended its plans to merge with Dallas-based Baylor Scott and White, which also has its own health plan, last week.