A study from Registerednurse.org predicts that Texas will not be able to meet the demand for nursing by 2030. The study shows that Texas will need 269,000 nurses by 2030, but it will only have 253,400. Aging baby boomers could suffer as they age over the next decade, increasing the need for nurses and patient care. 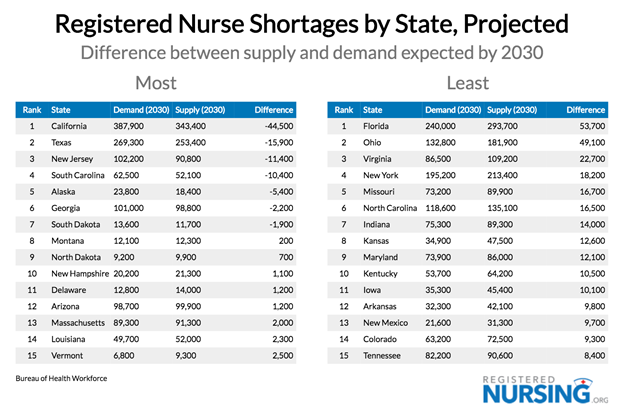 Nationwide, the Bureau of Labor Statistics says that the demand for nurses is expected to grow by 15 percent between 2016 and 2026, compared to 7 percent growth across all other occupations. The study found that by 2030, the US demand for nurses will increase by over 28% from 2.8 million to 3.6 million. Most states will be able to keep up with the demand, but even though Texas will add 88,000 over that period, it will not be able to keep up with demand.

Nurse pay doesn’t seem to be impacting shortages, as the states without enough nurses span the pay scale. Expected shortages range from nurses making over $100,000 in California to less than $60,000 in South Dakota. States with too many nurses range from Hawaii, where nurses make $102,000 to $56,000 in Alabama.