The alliance between Texas Health Resources and UT Southwestern Medical Center is moving toward a new milestone. The two sides have a $270 million collaborative hospital and medical office building in the works in Frisco, the first facilities resulting from the partnership known as Southwestern Health Resources. It’ll be jointly owned and operated.

Construction on the complex started last summer. On Tuesday, the two sides invited people out to mark the halfway point.

When all is said and done, in one chunk of land at Cobb Hill and North Dallas Tollway will be: Texas Health Hospital Frisco, a 325,000 square foot, 80-bed acute care hospital—designed to expand to 140 beds as needed. And: UT Southwestern Medical Center at Frisco, a 120,000-square-foot multispecialty clinic that will include an extension of UT Southwestern’s Peter O’Donnell Jr. Brain Institute as well as breast and colon cancer programs through the Harold C. Simmons Comprehensive Cancer Center.

According to the minutes of the June 2017 board of regents meeting in which the arrangement was passed, Texas Health and UT Southwestern formed a new nonprofit to develop the campus. Under the nonprofit, Texas Health will own 51 percent of the hospital to UT Southwestern’s 49 percent. The same proportions will initially be in place for the medical office building, but upon completion of the construction, UT Southwestern will buy that building and the land it sits on from the nonprofit at the expected cost of about $51.2 million.

Texas Health bought the land for the entire campus all the way back in 2007. 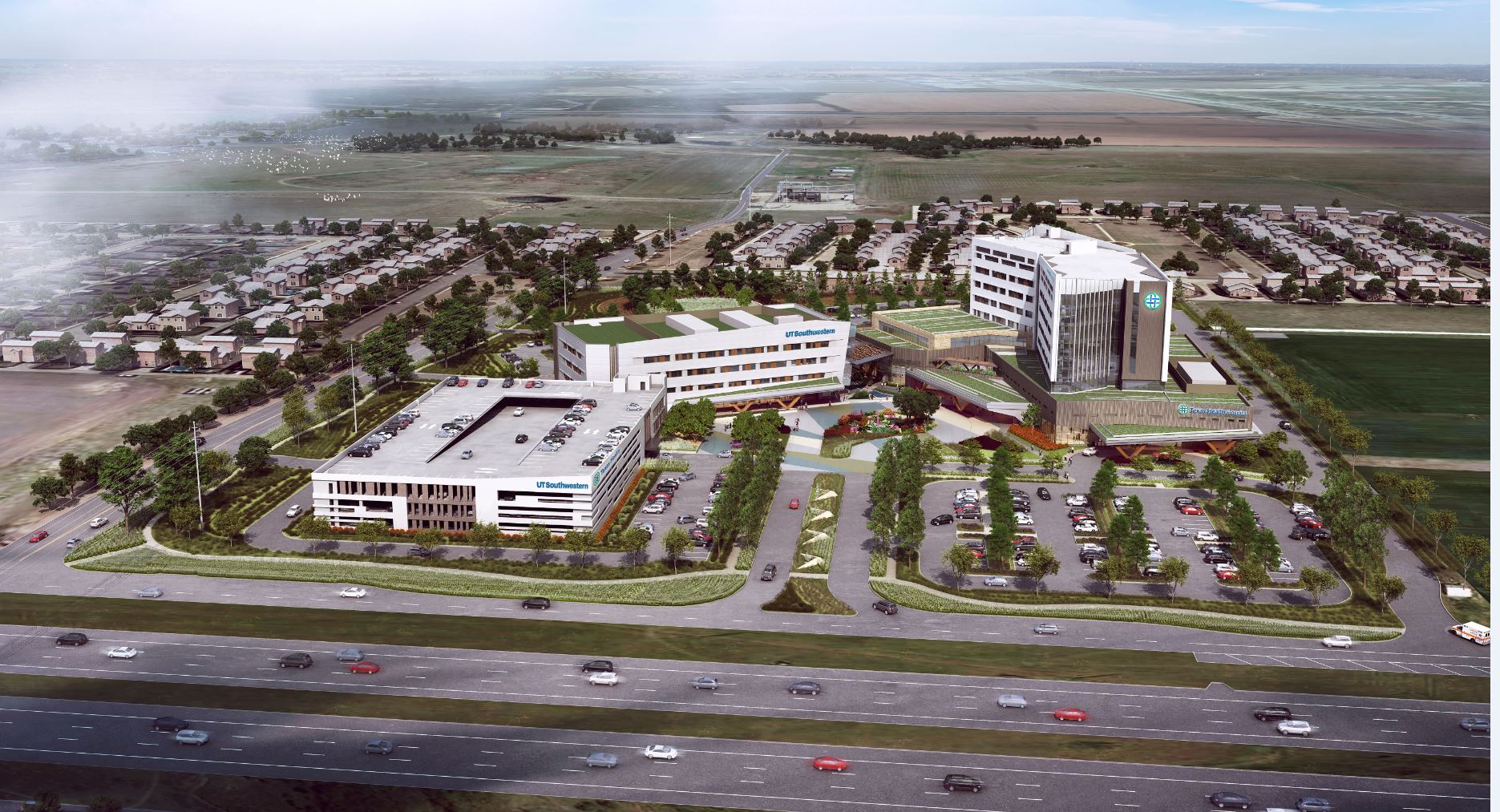 A rendering of the Frisco collaboration between THR and UTSW—parking garage on the left, medical office building in the middle, and hospital on the right.

The facilities are expected to open by the end of 2019. As is the case with the broader integration of Texas Health and UT Southwestern clinical networks, the Frisco complex provides Texas Health the ability to offer patients better access to more specialized care and gives UT Southwestern an in with a much larger number of patients. (D’s Matt Goodman wrote about some of the larger trends driving collaborations like this a few years ago, and it’s worth your time.)

“We are interested in participating in research and education, and this way we can participate with a world-class organization as oppose to recreating anything or duplicating anything,” Texas Health CEO Barclay Berdan said Tuesday. “UT Southwestern now has a partnership with an organization that stretches all across North Texas and provides access to people and communities all over North Texas.”

Three-fourths of the medical office building will be occupied by UT Southwestern faculty providing a range of specialty care. That care will include—in addition to the brain institute and cancer center—pediatric specialties like ophthalmology, otolaryngology, gastroenterology, and dermatology. A good portion of the first floor will go to physical medicine, rehab, and therapy.

The building will also have primary care physicians and other community physicians—including independents and providers from the Texas Health Physicians Group (THPG)—practicing alongside UT Southwestern’s specialists. “They may be on different floors, as we’re still figuring out that configuration,” UT Southwestern President Dr. Daniel Podolsky said.

The hospital, as well, will be staffed by UT Southwestern faculty, THPG physicians, and independent physicians. It’ll have an emergency department, surgical services, women’s services, and a neonatal intensive care unit.

Southwestern Health Resources came to be in late 2015, a partnership that instantly created one of the largest healthcare networks in the state. (The two sides can’t merge because of regulations against public dollars spilling into private or nonprofit health systems.)

The two sides have not announced any other plans for joint campuses, but Podolsky didn’t shoot down the possibility.

“I expect that, but that’s not to say that there are any concrete plans,” he said. “This partnership will continue to mature and blossom, and (future construction) will be a very plausible, if not likely, part of that.”