Earlier this month, Texas Health Resources announced its largest construction project in history, a $300 million investment at its Fort Worth campus that will modernize surgery suites and include the addition of a nine-story patient tower.

Construction is scheduled to start in the middle of this year and reach completion in late 2021. When all said and done, the new tower will add 144 beds to what is already one of the busiest hospitals in the state. 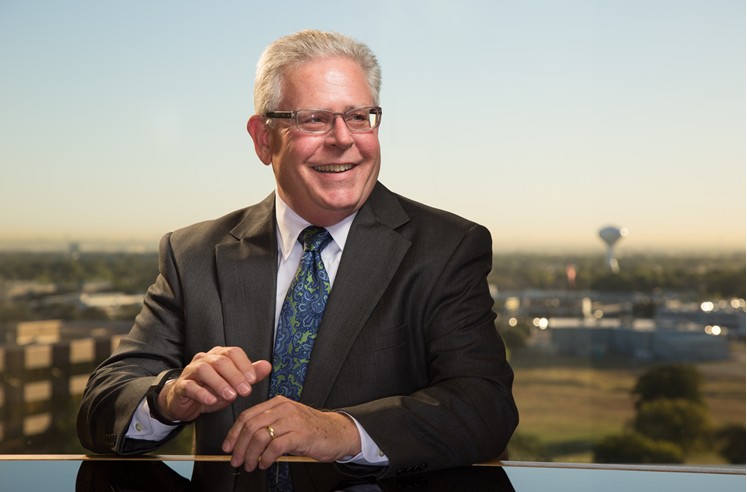 I hopped on the phone with Texas Health CEO Barclay Berdan to hear more about what prompted the massive project and how the system approaches investment across ever-growing North Texas.

Why’d you decide to pursue this construction project there in Fort Worth?

We’ve been evaluating a project in Fort Worth for a number of years. Two things. One is in the last couple of years our occupancy has basically been running at over 100 percent, which means you’re really full. The industry norm would be to run at about 85 percent occupied.

The second part of the project is to modernize surgical suites. We have a large surgery department at the hospital, but it’s several decades old and a number of the rooms are not large enough to really accommodate some of the needs and equipment of the increasing complexity of surgery that’s done there. So replacing a number of rooms with much larger, more modern OR facilities has been also a goal for us.

Are you seeing increasing demand on the surgical side of things, as well?

It’s a little complicated, but we have rooms that are different sizes and generally smaller in the existing surgical department, and that means you can’t always use some of the rooms for some of the types of surgery that we do because they don’t accommodate all of the equipment or the number of people that are in the room. That means that you can’t utilize all the space that you’ve dedicated to surgery as efficiently as you’d like. So bringing all the rooms up to one standard will allow us to actually increase the capacity of surgery by 25 or 30 percent without dramatically increasing the number of rooms.

There’s been a lot of conversation about this move to outpatient instead of inpatient care, and these smaller community hospitals and microhospitals that have popped up. You’re investing to make your hospital larger in Fort Worth, seeing the demand to do so. Can you speak a little to those trends in relation to your decision to build?

You can’t look at one project and just look at the strategy there. With this particular project, the main issue was capacity and the age and usability of the surgical suites. When you look at North Texas, we’re having dramatic population growth, the geography is expanding, reaching out farther and farther into the areas of North Texas. The single fastest age group that’s growing is the people that are over 65 that tend to consume more health services. When we run the numbers, even while there is clearly a move to do more on an outpatient or an ambulatory basis—sometimes driven by technology, sometimes driven by policy—the growth here kind of overwhelms that.

That’s not true in many markets around the country. You can read someone that’s writing in the Rust Belt and they’re closing beds. Well, that’s because they’re losing population. That’s the difference here in North Texas.

Specifically, Texas Health Fort Worth is the fourth-busiest hospital in the state of Texas. Many people may not realize that. Probably 65 percent of the patients that end up as inpatients in the hospital actually come through the emergency room. We have a reputation and we serve a large service area. We see a lot of people from really far out west of Fort Worth and the farther reaches of West Texas for some of our service lines. And, quite frankly, the complexity of our patients and the complexity of our service lines that we provide there continues to evolve and grow over time. So all those things kind of came together in our decision specifically to expand the number of beds and surgery rooms at Texas Health Fort Worth.

If you look at the whole system of Texas Health Resources, every year we make a substantial capital investment in all kinds of things. Some are inpatient, some are ambulatory. We’ve been growing the number of free-standing ambulatory surgery centers, which is part of that movement to move from inpatient to outpatient. Putting them in more convenient locations where people live, work, and play and not necessarily where there are hospitals. We’ve done the same thing with freestanding imaging centers and even freestanding emergency rooms. We’ve made a recent investment in Prosper, we put a new outpatient center there that has several different services. We’ve been expanding our primary care offices. We’ve also made capital investments in information technology across the system.

How do you see the landscape continuing to evolve five or ten years down the road?

One of the challenges of these capital-intensive projects like a bed tower or a new hospital is it’s not a six-month project. These tend to take—in terms of the planning and the execution and the building and the opening—three to four years. There are going to be some changes that happen, positive and negative, during that three- or four-year period. Hard to predict what those are. So, one of the things we’ve done with the Fort Worth bed tower is design it so that we’re actually going to build a couple of shell floors so that if we need to expand more beds in the future, we’ve got the infrastructure, the shell, to do that without disrupting the building.

You have lots of things that have to come into consideration—for any of these services, ambulatory or inpatient, you have to think about how you’re going to staff them in a marketplace that has some shortages. They’re very complex projects that take some time.