Thanks to the alert D CEO Healthcare readers at Dallas-based Merritt Hawkins, we have some additional context to our post yesterday looking at the number of physicians who’ve opted out of Medicare here in Dallas. 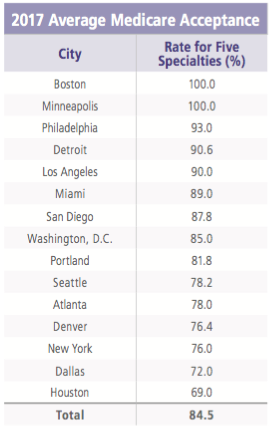 Medicare acceptance rates in 15 major markets, according to a survey by Merritt Hawkins.

Slicing into CMS data, we saw that Texas docs have submitted 169 opt-out affidavits, bested in the state of Texas only by Houston. Merritt Hawkins helps us put those two cities within a national context. Among the 15 major markets they surveyed last year, Houston and Dallas are dead last and second-to-dead last, respectively. As you’ll see in the chart, Dallas’ Medicare acceptance rate sits at 72 percent, 12.5 percentage points below the markets’ average, according to the doctor’s surveyed by Merritt Hawkins.