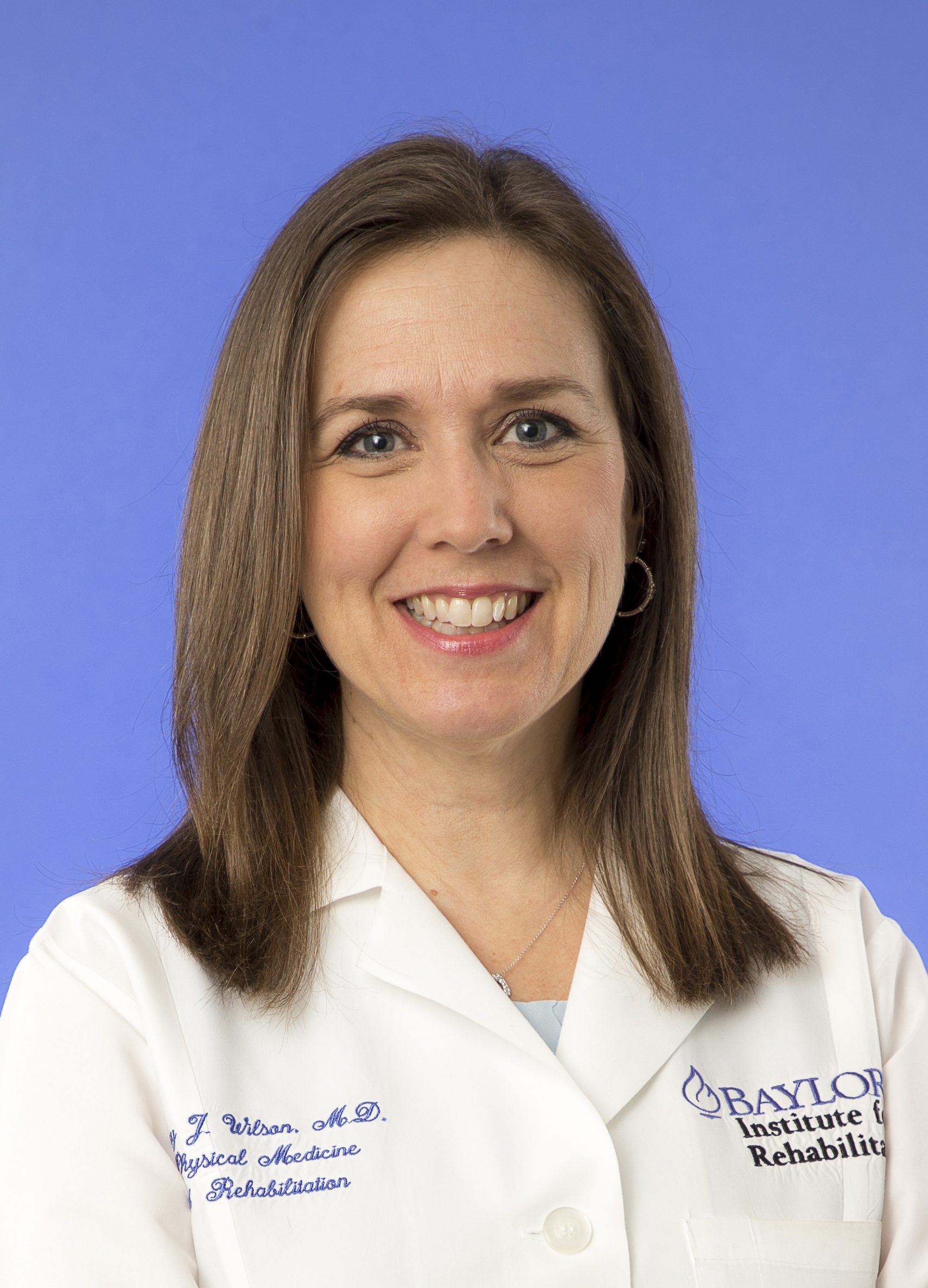 Dr. Amy Wilson initially came to the Baylor Institute for Rehabilitation in 1991 as a medical student. She was still trying to figure out what specialty she wanted to pursue, and entered open-minded. Wilson says it may sound hokey, but the moment she set foot in BIR’s facility, she knew becoming a physician medicine and rehabilitation specialist was something she wanted to do as a career. She later completed residency at Baylor University Medical Center at Dallas in 1996, finding herself across the street at BIR—the very place that helped her determine her practice.

“I walked into this place and I was like, ‘These clinicians are doing great things for these people here–I want to do this,'” she said. Now, in addition to working at BIH specializing in amputee, stroke, and general in-patient rehabilitation, Wilson serves as the medical director of BIR and president-elect of the medical staff  at BUMC. Her jobs come with a lot of responsibility, but Wilson stresses that passion, high levels of communication, and having strong team support get the job done.

Can you explain in detail what the sub-specialty of physical medicine rehabilitation entails?
“It’s one of the smallest fields in medicine and med school students don’t get exposure to it. You really have to seek it out to know about it. I basically explain to people that if you’ve known anyone with a brain, spine, or stroke injury, I’m the aftermath person. My field also does things like musculoskeletal medicine, interventional medicine. Let’s say you had back pain or hurt your knee, I’m the non-surgical side of those problems. It’s an interesting field really concerned around prevention, restoration of function, optimizing outcomes, but more from a physical standpoint, particularly when you have a life-altering injury.”

So how did you decide on focusing more on amputee care within your field?
“For me, it was very obvious the things I didn’t like to do [when I was in medical school]: I didn’t like the surgical side of medicine, so that kicks out all surgical things and OBGYN. But I liked other aspects and other specialties–neurology and a little bit of everything else. It helped me decide my particular focus … amputee care. I mostly focus on lower extremities that are amputated. For example, if you lost your leg in a motorcycle accident, I work with you to get the best prosthesis, physical therapy, and to perform to the best of your abilities.”

You basically work seven days a week seeing patients. So how do you juggle your other roles at BIR and BUMC?
“I have the smallest number of patients due to my other duties: BIR has seven of us full-time. For my other role, I work with the president and past-president at BUMC as president-elect of medical staff. Dr. Laura Petrey, Dr. Sharon Bakos, and I help bridge communication between the medical staff and Baylor administration. We work on improvement projects and sort out communication to keep everyone on the medical staff up-to-date and involved. We also take care of problems between medical staff. Additionally, we’re responsible for committees, making treatment guidelines, and hospital strategies.

“At BIR, I’m the medical director, so there is some overlap in the roles. …I have administrative responsibilities there too. I’m responsible for a lot of committees held at BIR and I’m in charge of my medical staff and the partners who work there. Again, the role demands high communication, so I work closely with the CMO and CNO. …We have to be very intertwined with the hospital administration. It’s a true partnership between the medical staff and administration.”

BUMC’s medical staff has a unique dynamic: you, the president, and the past president are all women, which is notable since this is the first time Baylor has had three consecutive women in a top leadership role. Can you tell me more about that?
“The physician leader for our medical staff is split up into those three parts, and these are elected positions. Most times, the people who are chosen best represent medical staffers’ interest and is most able to take care of some of the medical staff issues that should be addressed. I got elected in January, making the three roles taken by all women. Over the course of BUMC’s history, there’s only been six females [including us].”

“I think that we’re proud of the fact that, for the first time ever, three females are sitting in this leadership role.
It’s still a male-dominated world in medicine, with some exceptions of specialties that tend to attract females, but we are seeing the tides slowly turn to having more female leadership at hand. There are a lot of challenges balancing children, your family, your friends, and just the regular constraints around balancing work. But we all have the responsibility to deliver quality care and hopefully add another layer.”