The Robert Wood Johnson Foundation and University of Wisconsin have today issued their annual County Health Rankings, and by their measures of health outcomes based upon various physical, social, and economic factors, Collin County is the healthiest of all of the 241 Texas counties ranked (our state has 254 counties total).

It’s not surprising that one of the Texas’ wealthiest counties, with abundant access to medical care, has a healthier population overall. Likewise Denton’s (No. 4) and Rockwall’s (No. 7) places on the list make sense.

Here’s a sampling of how Dallas stacks up against adjacent counties, as well as the U.S. and state medians, on several (but far from all) of the factors involved in calculating these rankings. Income ratio takes the income at the 80th-percentile and divides that by the income level of the county’s 20th-percentile to determine income inequality: 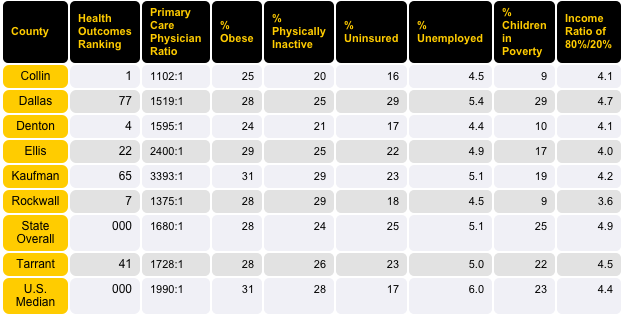