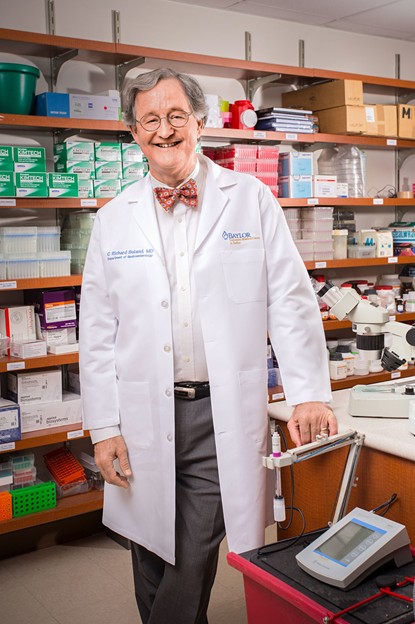 Dr. Rick Boland, one of the nation’s foremost researchers of the relationship between a patient’s genetic history and the development of disease. (Photo by Shane Kislack)

Every year, in June, when the Baylor University Medical Center gastroenterology trainees are preparing to strike out on their next medical endeavor, the staff plays a game.

The room is split in half, and it’s essentially slow-play Jeopardy. The moderator releases one medical fact at a time, until someone in the audience knows the disease or condition with which a patient is afflicted. The game, ostensibly, is a fun way to test the young doctors’ knowledge without putting them directly on the spot.

The moderator would begin: a 34 year-old woman. Pigmented spots on her body. Blushes easily.

Before any of the trainees—or the lifelong researchers, department heads, or medical association presidents, for that matter—could process the prompts, Dr. Rick Boland fires off his buzzer and rattles off some rare hereditary disease.

“Rick was always the winner,” says Dr. Lawrence Schiller, a Baylor gastroenterologist. “It makes you chuckle, because he knows the answer before the question is done.”

It’s worth noting that Fordtran and Schiller are, respectively, the co-author of the gold standard gastroenterology textbook and the former president of the American College of Gastroenterology. These are not men who are easily impressed by medical acuity.

But Boland, widely recognized as one of the world’s leading researchers in genetic colon cancer, is worthy of their praise.

“He has contributed more to the understanding of the familial variety of cancers of the colon and rectum than anyone else,” wrote Dr. William Clifford Roberts in the medical journal BUMC Proceedings upon Boland’s arrival at the hospital in 2004. He continued, in a grand show of restraint: “…he is a tremendous addition to BUMC.”

And it all has to do with one man, returning from World War II with stage III colon carcinoma.

Clement Boland was 26 when he returned from Italy. Forty pounds lighter than when he left, he was sent home from active duty with what military medics assumed was an ulcer. He was so gaunt that when his wife, Catherine, picked him up in New York City, she didn’t recognize him. He was too frail to rise from the stretcher on his own.

The two returned to Johnson City, New York, where Clem had a large cecal tumor removed. A pediatrician, he returned to work and got back to the business of raising his family. There was no chemotherapy at the time, and Clem refused radiation therapy. Had he received the treatment, Rick would have likely never been born the next year.

By the time he was five years old, Rick Boland realized he wanted to follow his father’s footsteps. Around the dinner table, Rick and his three siblings listened as their father regaled them with family tales and yarns of his life as a doctor. When he was 13, Rick’s father gave him a microscope and dissecting kit for Christmas. It’s the only Christmas he remembers exactly what he received.

In high school, advanced placement science classes piqued Boland’s interest in cells and biochemistry, and he eventually headed to Notre Dame to study pre-med. After college, he applied to medical school at Yale, and his father’s alma mater, Georgetown. He was accepted to both.

“Can the family afford to send me to Yale?” Rick asked his father.

His favorite course was one where they would show a person with a disease: something commonplace, like diabetes, or something incredibly rare; so rare that the hospital didn’t even have a patient to display. Boland would rack his brain, then pounce on an answer.

This story appears in the D Magazine Medical Directory. Head here to finish it.