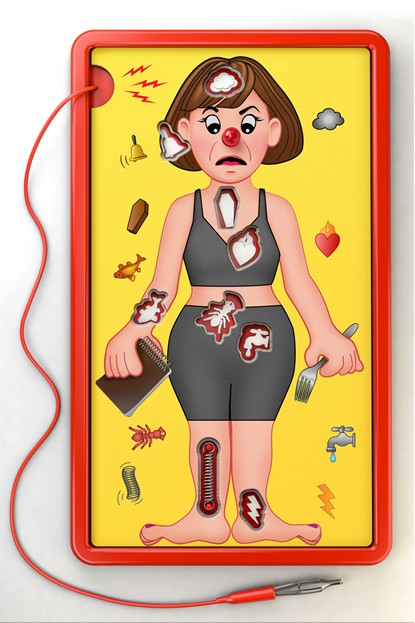 When the nurse described the procedure I was about to undergo, she told me I would be sedated. She took off her reading glasses, looked me in the eyes, and gave it to me straight: a technician would insert a 3-foot tube with a camera into my anus and up the rectum, where it would traverse the hairpin curves of my colon. She stared at me in disbelief when I asked to remain lucid so I could watch the camera snake through me. As she scribbled in my chart, I watched the tail of a Felix the Cat clock swing back and forth for a good two minutes before she agreed to administer only a half-dose of sedative.

The hardest part turned out to be holding the pose. While lying on my left side in a freezing surgical suite, I had to bring my right leg up to my chest and make an awkward three-quarter neck twist to view a monitor behind my head. I felt like a roofied Nadia Comaneci, desperate for cash, making an adult movie she’d later regret.

I was no stranger to colonoscopies. This was my third in a decade. I’ve been a dining critic for 18 years. The job presents certain gastrointestinal hazards. When I tell people what I do for a living, they often say they wish they had my job. It does sound glorious. I get paid to eat at new restaurants, enjoying rich, decadent food, wine, and cocktails. The job is a privilege, and it certainly has brilliant moments. But the truth is that dining critics eat more average and subpar meals than exquisite ones. For me, the work produced stomach cramps, gas, acid reflux, bloating, and diarrhea. Lots of diarrhea.

It often felt as if snakes were trying to bite their way out of my bowels. Other times, my stomach felt like I’d swallowed fire ants. My first colonoscopy was scheduled after I told my gastroenterologist, “Two porcupines were playing soccer in my intestines, and they died.” After another colonoscopy indicated nothing serious, I accepted pain and humiliation as part of my life.

Head here for the rest of Nancy’s feature, including how she learned of her diagnosis and changed her life to battle it.