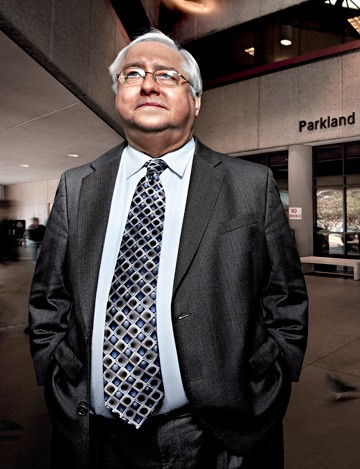 Ron Anderson, M.D., the former CEO of Parkland Health & Hospital System, died last night at age 68 of liver cancer. Anderson’s death comes just a day after the system’s board unanimously voted to name a new outpatient clinic after him and to install a statue of him in the lobby of the new Parkland Memorial Hospital.

“Dr. Anderson epitomized the ideal of the servant leader,” said Debbie D. Branson, chair of Parkland’s Board of Managers, in a statement. “His passionate dedication to improve health care for the poor and underserved inspired a generation of caregivers.”

Anderson did his residency training at Parkland in the 1970s and became the hospital’s top executive in 1982 at age 35. In 2005, he achieved the rare feat of being selected No. 1 on Modern Physician magazine’s list of the 50 most powerful physician executives, and No. 1 on Modern Healthcare magazine’s list of 100 most powerful people in healthcare.

He ran Parkland until retiring in 2011. In his final years with the system, he led the bond campaign that secured public financing for the new $1.3 billion Parkland Memorial Hospital that’s slated to open next year.

Fred Cerise, M.D., who succeeded Anderson as CEO of Parkland Health and Hospital System in March of this year, said replacing the dedicated leader has been “a humbling experience. Dr. Anderson’s focus was always on the patient, and he used his talents tirelessly to advance medical care and expand access for the indigent. The people of Dallas County and indeed, the entire nation, benefited from his vision and innovations.”

Dr. Daniel Podolsky, president of UT Southwestern Medical Center, released this statement upon hearing of his longtime colleague’s death: “Throughout his years of service as both a member of our faculty and leader of Parkland, Dr. Ron Anderson’s dedication to the needs of the most vulnerable of our community was unwavering. His example should inspire generations of providers to care for and about all those in our society. Through his stewardship of Parkland, in partnership with the physicians of UT Southwestern, legions have received care and comfort not available to them otherwise. I know I speak for all on the UT Southwestern Medical Center campus, in extending our deepest sympathies to his family, friends and colleagues.”

Steve Love, president and CEO of the Dallas-Fort Worth Hospital Council, shared these perspectives: “After learning of the loss of Dr. Ron Anderson, we are all grieving for a man who was a giant in the North Texas health care delivery system. Arthur Schopenhauer, a German philosopher, once said, ‘Compassion is the basis of all morality,’ and Dr. Anderson was the most compassionate person I have ever met. He championed the plight of the most vulnerable in our society and many lives have been saved in North Texas because of his clinical caring compassion for others. Ron supported local, state and national health care organizations by bringing value and expertise on delivering the best health care to all patients. He served as Chair of the Dallas-Fort Worth Hospital Council in 1992, received the Boone Powell Senior Award of Excellence in 2002, and has been serving on our DFWHC Foundation Board of Trustees since its inception. We are all better people because we knew Dr. Ron Anderson. We need to celebrate his life by continuing his mission of social justice, fairness and health care excellence.”

Stephen Mansfield, president and CEO of Methodist Health System, also offered his condolences: “Today, the healthcare industry morns the loss of one of the most impactful healthcare CEOs that I have worked with in my career … Dr. Ron Anderson. He was a selfless, compassionate, trailblazer in our industry and a tireless champion for the poor and disenfranchised. Truly a great loss, and our thoughts go out to his family, friends, and the Parkland community.”

Below is more information from a release sent out by Parkland this morning. Additional details on Anderson can be found in a profile that D CEO magazine did on him a few years back.

In the mid-1980s Dr. Anderson was thrust into the national spotlight when he spoke out against “patient dumping” — the practice of transferring medically unstable patients from private to public hospitals because of the patients’ inability to pay. Dr. Anderson’s championship of the cause led to the passage of landmark legislation concerning indigent care in Texas, and to passage of federal legislation in 1986 banning the practice.

Throughout his life he advocated for making healthcare a right for everyone, universally available to every U.S. citizen. His vision of healthcare for all, regardless of ability to pay, paved the way for Parkland’s Community Oriented Primary Care, a network of neighborhood-based health centers that provide a “medical home” to primarily low-income communities.

Healthcare administrators and physicians came from as far away as Thailand to study Parkland’s system of health centers. It  became a national model for other communities across the country and won numerous awards for its ability to involve the community in clinic activities.

Under Dr. Anderson’s guidance, the system grew to include 12 local healthcare clinics, 12 school-based clinics and the Homeless Outreach Medical Services, which provides medical care in more than 20 homeless shelters around Dallas County.

In the mid-1990s, he was once again thrust into the role of a national spokesperson because of his concern for the confidentiality of the physician-patient relationship when welfare reform measures threatened to require physicians and other healthcare providers to report undocumented immigrants to the Immigration and Naturalization Service.

He received his medical degree from the University of Oklahoma and his pharmacology degree from Southwestern Oklahoma State University, where he was named a Distinguished Alumnus in 1987. He said he found his niche at Parkland, where he could teach, do research and take care of patients under mentors like W. Donald Seldin, MD, who built UT Southwestern’s internal medicine department and, Dr. Anderson said, helped bring Parkland to world-class status.

When Dr. Anderson was approached by Parkland board chairman Ralph Rogers in 1982 to assume the chief administrator’s position, he initially refused the offer. He recalled that Rogers, a respected community leader who rarely took “no” for an answer, persuaded him to accept the job by convincing Dr. Anderson that rather than take care of one person, he could take care of hundreds of people a day, and influence the healthcare of hundreds of thousands of others every year as CEO of Parkland.

During his years at Parkland, Dr. Anderson was courted by other hospitals and institutions across the country, but he never lost his zeal for the Dallas hospital. He often said that people at Parkland, himself included, had a missionary mentality and a passion for their work that transcended the lure of other institutions.

“Work at Parkland isn’t a job,” he said. “It is what you do — who you are. It is your life. There are very few places where you can get that.”

Dr. Anderson’s zest for life extended beyond the walls of the hospital. He was an avid reader, devouring everything from current medical literature and popular fiction and nonfiction to ancient classics. He was a writer, as well, and authored hundreds of medical and scholarly articles, monoliths and other essays.

His Oklahoma upbringing gave him a love and appreciation of American Indian culture — and the Indian name of Medicine Bear, a name he said was not associated with his profession. He was an avid hiker who often included Indian reservations and ancient Indian relics as part of his walking vacations. His interest in Indian lore became almost an obsession, judging by the walls of his office, which were covered in Indian artifacts and relics.

He was a devout Baptist who disliked religious labels but who believed in living the life of an involved activist. “All of the people I have admired are people who are activists,” he said. “Here (at Parkland) you can take care of the least of our brethren.”

Dr. Anderson once told a UT Southwestern graduating class, “It is not enough just to try ‘to do good’ and try ‘to avoid evil,’ although these are the ethical keystones of the physician/patient relationship. We cannot be paternalistic toward patients and must accept their cultural, religious, ethnic and social differences. We must respect our patients’ autonomy and desire for wholeness, which should stimulate us to address the social justice issues affecting our patients’ lives.”

Throughout his life, Dr. Ron Anderson fought long and hard for that reform.