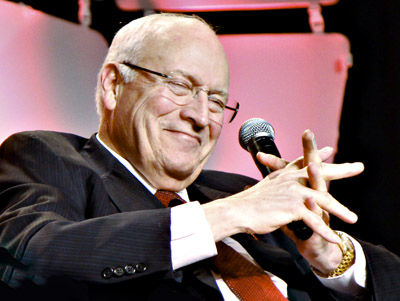 Dick Cheney, who’s battled heart disease for nearly four decades, says it’s “nothing short of a miracle” that he’s still alive. The former vice president appeared in Dallas Friday at the 2014 Go Red for Women fundraising luncheon and reported that he feels better than he has in years, thanks to cutting-edge science and medical innovations.

Cheney, 73, has suffered a total of five heart attacks including one in the summer of 2010, after which he was outfitted with a left-ventricular assist device (or LVAD). He thought at times during this period that he was going to die, Cheney told a crowd of about 1,200 at the Hilton Anatole: “I was at peace that I’d reached the end of my days.”

Reviewing his history of heart problems in a discussion with his wife, Lynne, and Dr. Jonathan Reiner, his personal cardiologist, Cheney recalled smoking two to three packs of cigarettes per day earlier in his life. It was a habit made easier while he served as chief of staff to President Gerald Ford, he said, because tobacco companies used to provide the White House with free cigarettes in gold-trimmed white boxes stamped with the presidential seal.

But he immediately quit smoking, Cheney said, after suffering his first heart attack in 1978, at the age of 37, while running for Wyoming’s single congressional seat. The health problem didn’t cause him to quit the race, though, because “stress comes from doing stuff you don’t want to do,” not things that you love, he said.

Although he’s been taking the statin called Lupitor since the 1980s, Cheney revealed, he suffered several more heart attacks before things “really started going downhill” 17 months after leaving the vice presidency under George W. Bush. The lowest point for his health came in 2010, when he got the LVAD before receiving a new heart  from an anonymous donor in March of 2012, after a 20-month wait.

“The transplant surgery was the easiest surgery I ever had,” Cheney said. “It was the gift of life itself. I wake up every day with a smile on my face to see a day I never expected to see.”

Major underwriters for the luncheon, which was hosted by the Dallas Division of the American Heart Association, were Texas Health Resources and Commercial Metals. Each attendee at the fundraiser received a signed copy of Heart: An American Medical Odyssey, which Cheney wrote with his daughter, Liz Cheney, and Reiner.