Last month, Dallas native Logan Sherman won the Dallas Marathon, finishing the 26-mile trek with a time of 2:27:28. Most notable, he is the first American man and Dallas native to win the marathon in more than a decade.

Sherman, who opened a chiropractic business this past fall, recently talked to Be Well about the rush of winning, as well as his motivations and struggles throughout the race.

[The conversation has been edited for clarity.]

So, being a Dallas native, how does it feel to win your hometown’s marathon?

It was unbelievable. I have not slept. It’s really unreal. I’m trying to live in the moment right now. It was my goal, and it was the thing I’ve shot for, for 15 years, and I couldn’t be in a higher place right now.

The goal of winning the marathon wasn’t really for myself, it was for the community of Dallas. I really want people to feel a connection when they see me. I want people to feel inspired to push themselves, to push toward a goal that might take them 15 years but they can sure do it. 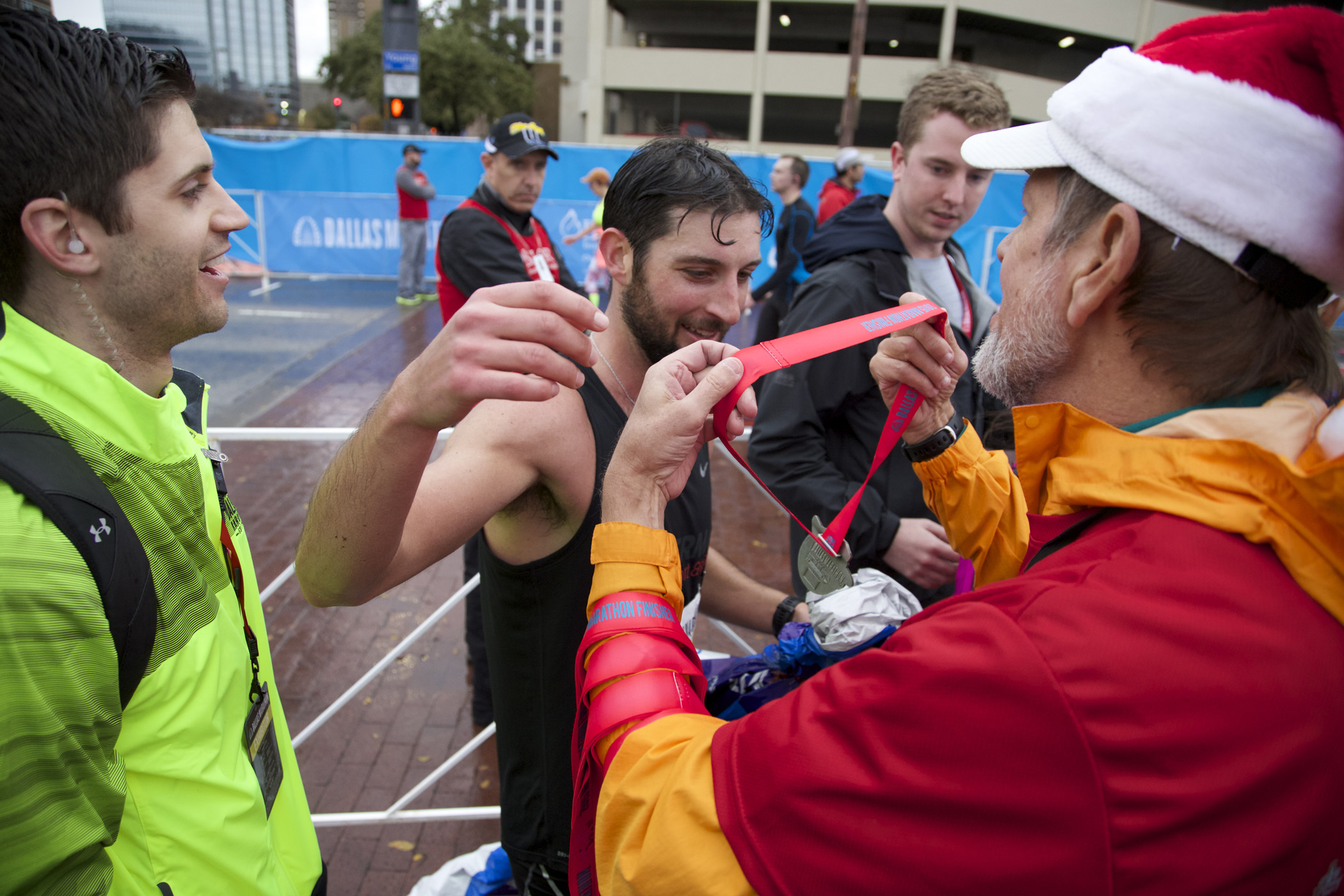 Leading up to the race, how did you train? What was your process?

I opened up a business here in October, so it’s been very chaotic. Over the summer, I made it kind of a mission of mine to make sure I took the time to do what I needed to do. To get up extra early, if I needed to. [There were] plenty of 4 a.m. wakeup calls, plenty of going on vacation and trying to find a route to run. I never really lost sight of that, and I had such great support from my friends, family, and fiancée.

Everybody has been supportive of me. I trained pretty aggressively, and around the end of October and middle of November, I felt very over-trained. I felt very fatigued and tired, which is kind of a common thing, I think, with a lot of marathoners. I did not race well this fall. I had issues with cramps, stress, and anxiety. I did the Turkey Trot, and I had a really bad race for myself and was pretty upset with running and [questioned] if I wanted to continue on. I kind of put things in perspective the last three weeks [leading up to the marathon]. I [put a focus] on being calm, and the Dallas Marathon being the only thing that I had in my immediate future. From the middle of November until even the day before, I didn’t feel good. I didn’t feel a rush or anything like that. But once I stepped outside and saw the finish line, it was just a distinct rush, and I hadn’t felt that good in months. It was just incredible.

Given that, when you went into the race, what kind of expectations did you have? Did you go into it thinking you were going to win the entire thing?

I try to tell all of my patients that you have to try to have a positive attitude, even in the midst of chaos. You want to be level-headed. Your mind is your biggest thing in a marathon, and it can really mess with you. I’ve struggled a lot going into the marathon, and I think going into that last mile was all about positive affirmation. 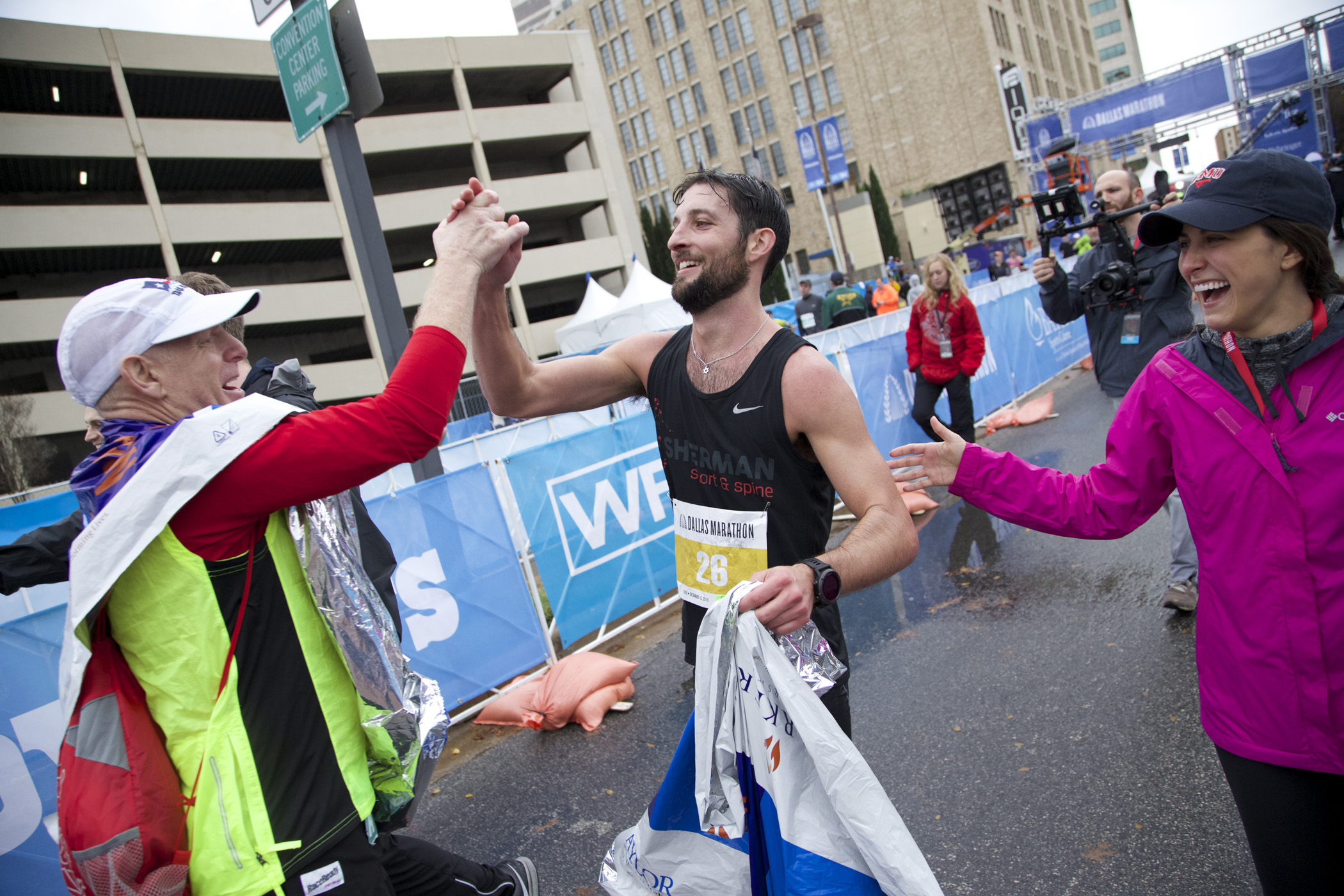 Did you have any specific points of difficulty within the race? If so, at what point?

I did. I had a couple of friends and family out there supporting me, and I really got lost in the beginning of the race. I couldn’t figure out who was in the marathon, who was in the half-marathon. I went out aggressively and fast just to kind of maintain my position, and I turned to a friend around Mile 8, and I asked him what position I was in, and he said fourth. I started freaking out. I was like, “OK. It’s a little troublesome. I’m firing on all engines right now.”

Shortly after that, I think around Mile 11, somebody said, “You’re in first, and you’ve got a lead.” I had side stitches and cramps around Mile 12, and then it got really bad around Mile 17 to a point where I almost stopped. It was a struggle. I saw that that was going to be the difficult part. From about Miles 17 to 20, I struggled pretty hard. And after that, I just kind of put my head down and tried to feed off of everybody’s energy and everybody cheering me on. I tried not to break my rhythm, and that’s really what it’s about. It’s about trying to get into your own rhythm.

Have you run marathons in other cities? How do they compare to the Dallas Marathon?

I have done a couple of other marathons and half-marathons. I’ve gone to the Sendai International Half Marathon to represent Dallas, which was a great experience a couple of years back. I’ve been to Boston for three years. (I was there the year of the bombing.) I’m definitely biased, but I would put Dallas up there with any race I’ve ever been to. I think it means more to me than anything. It’s my home. The [Dallas Marathon] staff does a great job of trying to take you through communities in Dallas where there’s going to be people out there cheering you on – Highland Park, Lakewood, Greenville. It’s just incredible. The people are out  there when you need it. Everybody cheers. It wasn’t great weather for a spectator: It was raining; it was cool; you didn’t know if it was going to start pouring on you. But there were so many people out there, and that was so cool.