Enjoy unlimited access to all of our incredible journalism, in print and digital.
Subscribe Now
Advertisement
For Fun

Where a Confederate war memorial once stood, there is now a bizarre piece making supernatural reference to early Dallas history.
By Alex Macon | December 13, 2021|5:28 pm
Advertisement

I was fortunate enough to spend a few minutes on Monday afternoon soaking in the sunshine and beautiful weather downtown at Pioneer Park Cemetery, where some of the city’s founders and early luminaries are buried in the shadow of the convention center. Until last summer, a Confederate war memorial also stood here. As of Monday morning, a statue that I’m going to tentatively describe as depicting a woman’s figure with the head of a haloed squid had risen in place of the old Confederate soldiers. 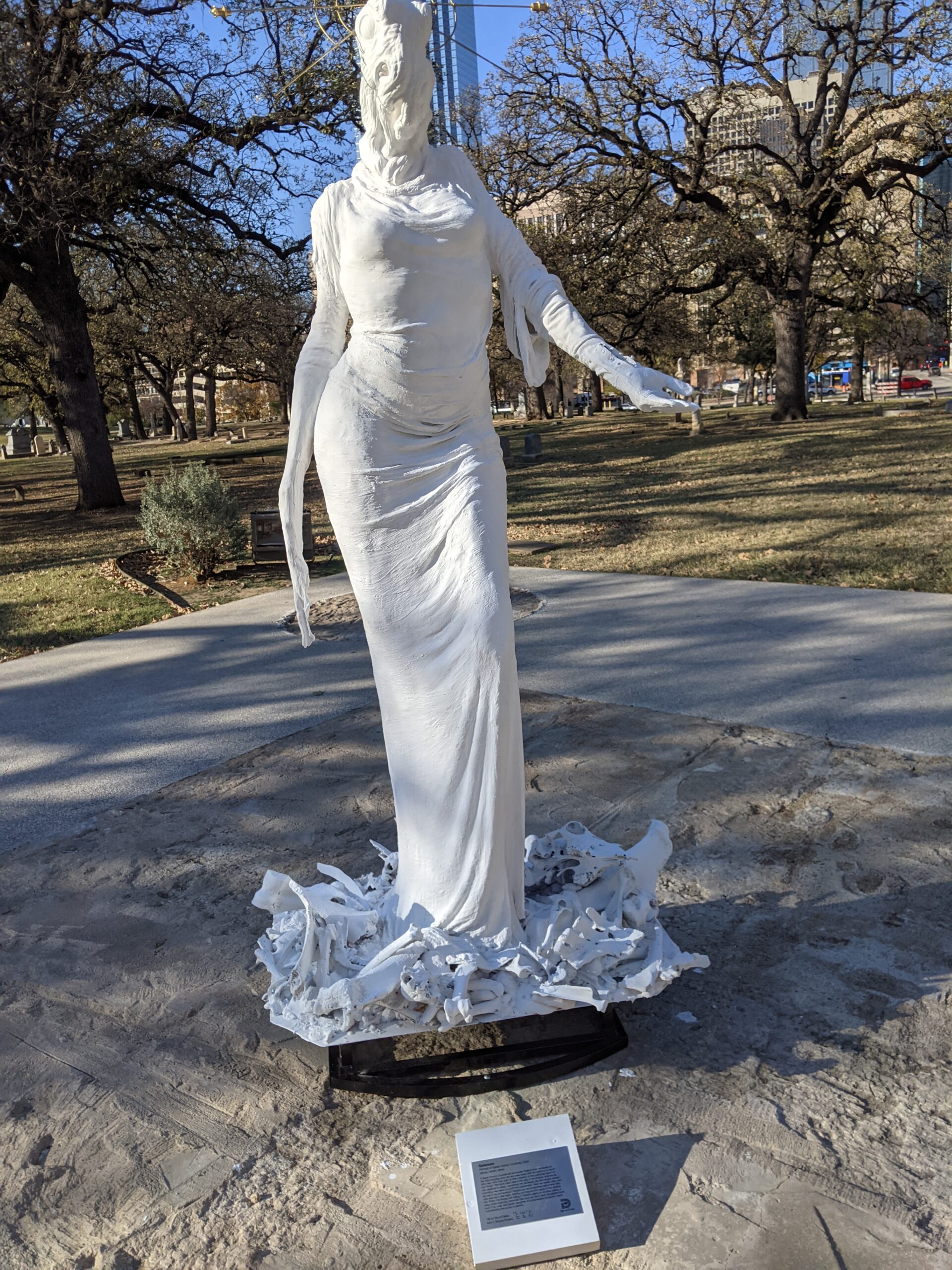 When I walked up the cemetery looked empty, with the exception of a Dallas Morning News reporter who beat me to the scene. We were both following the lead of WFAA’s Pete Freedman, who had tweeted about the statue’s apparent overnight appearance earlier in the day. Freedman, the founder of Central Track, has really owned the “weird cephalopod statue in Dallas” beat over the last several years, and it’s worth reading his full recounting of the strange saga that began in 2019, when downtown workers encountered another squid-headed human statue installed near the convention center.

This new installation seems to be by the same artist, identified on a nearby plaque as Solomon. Both works share a cephalopod-human hybrid style as well as the same style of plaque, each detailing a supernatural explication of early Dallas history. The first statue was described as a “self-portrait” of John Neely Bryan, the tradesman who founded Dallas before he eventually died at the Texas Statue Lunatic Asylum. This newest piece is billed as a portrait of Sarah Horton Cockrell, an early Dallasite who was instrumental in the building of a suspension bridge across the Trinity River in the 1860s and ‘70s, per the Texas State Historical Association.

I’d like to tell you that I know what any of it means. I can tell you that T. Boone Pickens, who has been dead for more than two years, probably did not give this to the city of Dallas, as the plaque claims. I can also tell you that I quite like this piece. Dallas is weird. We should embrace it with more squid sculptures making mysterious claims about our early history.

I’m hoping for three things here. I’d like to see the city leave this standing, at least for a little while. I’d like to see Freedman, who seems to have previously gone on a sort of Zodiac-like string-on-an-evidence-board conspiratorial odyssey trying to figure out who installed that piece and why, dive back in and crack the case—perhaps with some crowd-sourced help. And I’d like to see the Bana Man, the other anonymous guerilla artist who has long vexed us with perplexing works left in downtown Dallas, make a resurgence.

The Rolling Stones are in town to find their all.
By Alex Macon
For Fun

The Stoneleigh P is winning the war on Christmas.
By Alex Macon
D Magazine Directories