Carpenter Park comes with downtown’s first public outdoor basketball court, which is—for better or worse—shaded by I-345.
By Alex Macon | November 29, 2021|9:00 am
Advertisement

What will be downtown Dallas’ largest park is taking shape in the shadow of I-345. On track for a spring opening on the east side of downtown—pending the city’s public works department finishing up construction on Pacific Avenue to the immediate south—Carpenter Park will boast ample lawns and amenities including walking trails, a dog park, a basketball court, and public art.

Its roughly 5.7 acres are already more park than construction site. On a recent tour, I felt much of the excitement that’s justified the city center’s park-building boom. Parks for Downtown Dallas is the nonprofit in charge of building Carpenter, whose construction is mostly being funded by $15 million in city bond funds, and three other downtown parks backed by a mix of public and private dollars. Two, Pacific Plaza and West End Square, are finished. The nonprofit, which is actively raising money to sustain these spaces in the years ahead, calls them “neighborhood parks.” This draws a contrast with the flashy destination-style programming of Klyde Warren Park, a little less than a mile’s walk to the northwest of Carpenter.

Carpenter’s size and some of its amenities—the basketball court will provide the first free, public place to play hoops downtown—distinguish it from its neighborhood park siblings, but it’s still essentially a park designed for people who are already living, working, or staying at a hotel in the center of the city.

They’ll find plenty to like. Paths meander over the expanse of lawn. The gentle slope of a hillside on the park’s northwest end should make a decent outdoor theater for movie nights hosted by Downtown Dallas Inc. There are graffiti-resistant tiles on a small outpost with bathrooms, an administration suite, and a sort of multipurpose kiosk that can be used to check out basketballs and maybe sell concessions. Lanes for food trucks. A plaza. Modest and playful water features for the kids. Tasteful landscaping. A small dog park. 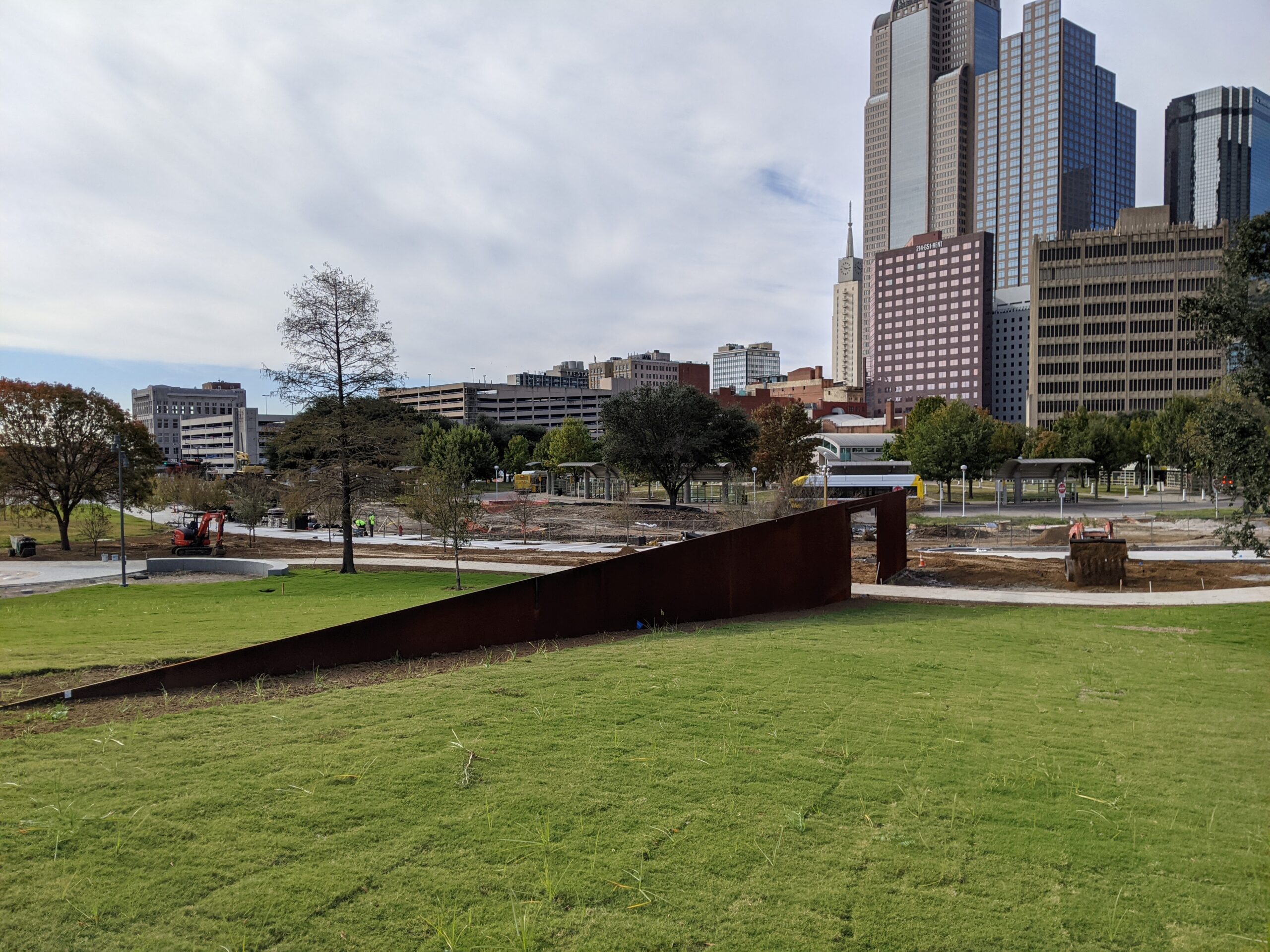 It’s a lovely space, and qualifies as a significant upgrade from what was here before, the neglected and easy-to-miss Carpenter Plaza. The re-routing and straightening of Pearl Street, to the west, opened up the opportunity and space to make Carpenter Park possible. One of the few things worth saving from the old park was sculptor Robert Irwin’s Portal Park Piece (Slice), an 8-foot-tall steel wedge segmenting the greenspace. Irwin agreed to re-work (note the new perforations) and re-orient the sculpture on an east-west axis, and it remains a central part of the new park. It looks like it belongs, even more than it did before. 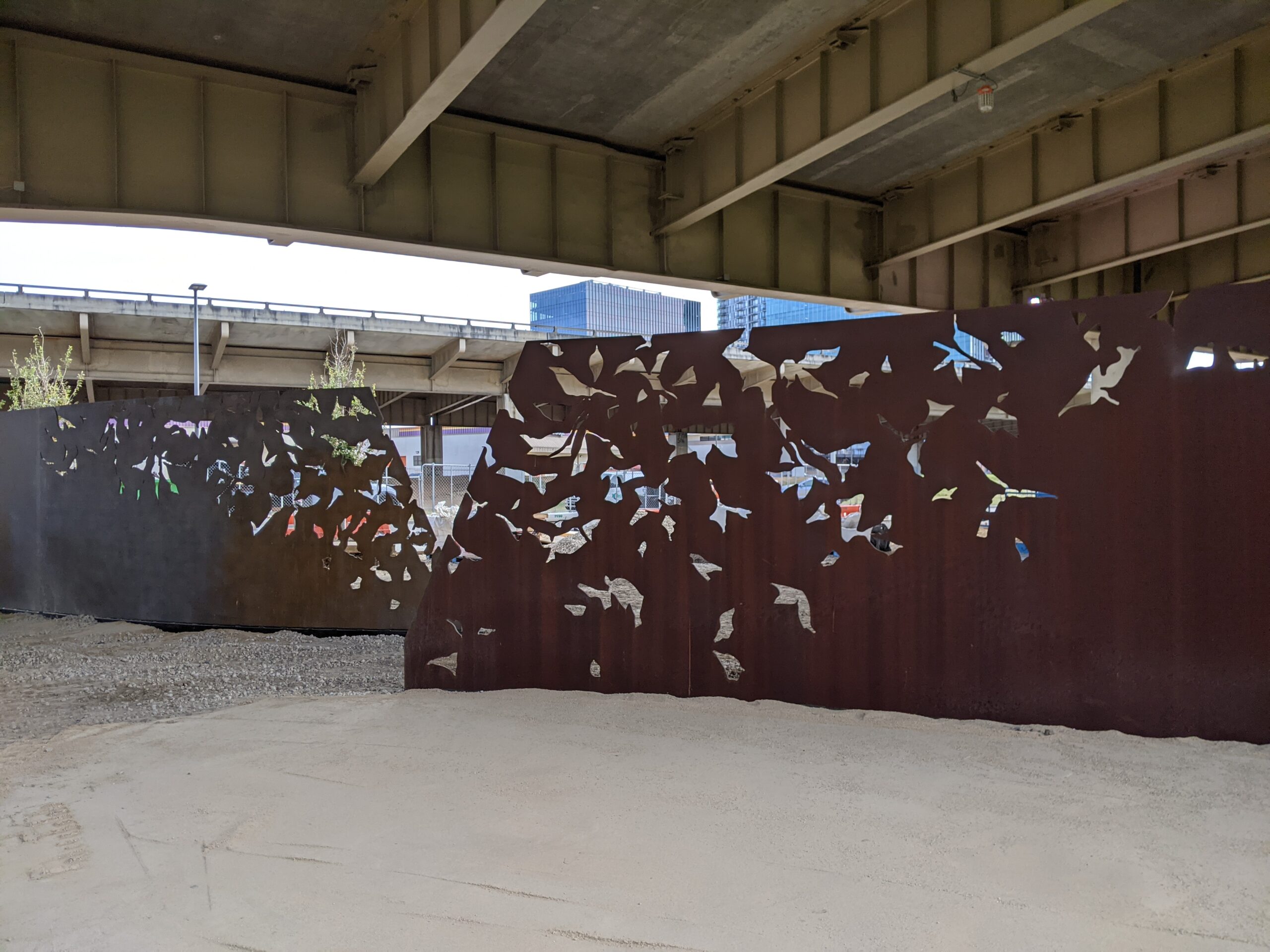 The Sheraton Hotel is next door, and there is some residential development happening nearby. But questions remain about who will use the park. If Carpenter Park is not a destination like Klyde Warren, then it will take a lot of hotel guests and downtown office workers and neighboring residents to make its 5.7 acres feel lively and appreciated. It’s not quite an “if you build it, they will come” gamble. There are too many cranes downtown and in Deep Ellum for that. They’re already coming. And a park like this could help drive further development. There’s reason to hope and believe that Carpenter Park will help stitch downtown into booming Deep Ellum and find hundreds of regular users in a growing city core—even if you worry that it won’t.

The bigger barrier to Carpenter Park’s success is physical. I-345, the elevated stretch of highway connecting Central to I-45, doesn’t necessarily invite pleasant strolls between downtown and points east. All that overhead traffic can be loud, and you can hear it from the park. An optimist would point out that basketball players on the outdoor court, which is underneath I-345, will get ample shade in the Texas summer. Others might wonder what effect pollution from the highway will have on the kids playing below it.

Parks for Downtown Dallas and the Beck Group, which is doing the actual building, are making the best of it with color-changing light fixtures under the highway. TxDOT owns the land here, which limits some of what can be done with the space. (Earlier plans for a skate park were put on ice for that reason.) And, while the state is weighing various options for I-345 that include everything from removing to reinforcing the elevated highway, any of those plans will take years if not decades to come to fruition. The park and the highway have to co-exist, for now.

Carpenter Park should be a welcome addition to a downtown that needs to continue growing more walkable and live-able. But it’s going to fall short of what it could be as long as there’s a highway looming overhead.