One of the most storied venues in Texas is being saved from the wrecking ball. New ownership is announcing its big plans: not just a space for live music, but a community center, a hub for local artists and musicians. The city of Dallas is saying it will pony up $500,000 for restoration. The press is gushing about all of it. After years in a state of ignominious repair, the Longhorn Ballroom—where Bob Wills led the house band, where Jack Ruby once held the lease, where the Sex Pistols shared a marquee with Merle Haggard, where countless country and western and blues and soul and rock acts played shows that the people who were there will never forget—is back.

That was all happening in 2017, and if anyone knew that those plans weren’t going to work out, they were saying it quietly and out of earshot of any giddy media member. Within a couple years, the owners would default on their loans. The Ballroom would go back on the market to be sold out of bankruptcy. Lawyers would get involved. Demolition would again look all too possible.

You could be forgiven for experiencing some deja vu when the Dallas Morning News first reported a couple weeks ago on the latest plan to resurrect the Longhorn. The difference this time is Edwin Cabaniss, who is now under contract to buy the venue. Cabaniss has done this sort of thing before, rescuing and restoring the Kessler Theater in Oak Cliff and the Heights Theater in Houston.

The Kessler’s revitalization shows that Cabaniss knows what he’s doing. It’s not only one of the best music venues in Texas—well-tuned sound, great atmosphere—it’s become a de facto community arts center. Moreover, the Kessler was a catalyst for creativity and for economic development in North Oak Cliff, Cabaniss says.

He has something similar in mind for the Longhorn, if at a larger scale. (For better or worse, the Longhorn also has fewer neighbors to worry about, mostly industrial users that wouldn’t mind a little concert noise.) On the property itself, there’s the main hall, a music venue that can host up to 2,000 people, and a second building that could be rented out to small tenants as a “creative center for entrepreneurs.”

“We think we have a lot of constituencies here that are really pulling together,” he says. “Start with the music. First and foremost, a lot of people think if anybody can pull it off, it would be us.”

Cabaniss is still wrangling some of those other constituencies, which partly explains why he invited me to come check out the Longhorn on Thursday. Saving this place won’t be cheap. “This is over a $10 million project,” he says. “I’m close. I’m looking for the gap.”

Reporters and media types tend to overrate their level of influence on decision-makers, but positive stories can’t hurt if you’re trying to fill that sort of gap—or at least get someone at City Hall to pay for a sidewalk outside the music venue you’re buying.

“We have a vision and we have the history,” Cabaniss says. “We have a pretty good amount of capital. We’ve got debt commitments. We’ve got incentives we’re working on. We’re still not all the way there. We need some help from the city.”

The area around the venue, just southwest of the Cedars and just north of the Trinity River, needs some work. Drainage, sidewalks, lighting, improvements to pedestrian and vehicle access. That’s where Cabaniss hopes the city will come in.

He’s in the early stages of applying to get the Longhorn listed on the National Register of Historic Places, which would open up additional historic tax credits. This neighborhood is in a federal Opportunity Zone, and he says he can demonstrate the Longhorn’s potential to create jobs and spur economic development to open up other tax breaks and public funds. He plans to spend millions of dollars sprucing up the place. And sprucing it will need: the lights literally went out for 20 minutes during Councilman Scott Griggs’ mayoral watch party here in 2019, the building apparently unable to meet the energy demand from a single DJ.

Preservation Dallas, which has named the Longhorn one of the most endangered historic places in town, has said it approves of Cabaniss’ plans. Mayor Eric Johnson, a noted supporter of live music, told the DMN he considered the Longhorn “a living monument to our city’s rich music history, and it is clear that it still has tremendous untapped potential.” Cabaniss says other city officials have also been supportive.

“This project has some champions in the right positions that want to see it work,” he says. But “it’s not a done deal until it’s a done deal.”

As for the vision behind the deal, he had me on board after about an hour walking in and around the Longhorn. This could be really cool.

There’s the Longhorn’s main room, which, even under construction and with some obvious signs of wear and tear, has a sort of weathered country charm that’s hard to find elsewhere in Dallas. There’s the lawn outside where Cabaniss hopes to put a “boutique” outdoor amphitheater, the Trinity trickling nearby and the Longhorn’s industrial neighbors obscured by trees.

There’s the place’s storied history, some of it spelled out with paintings and murals showing figures like Charley Pride and Willie Nelson and Dolly Parton. Some of it is spelled out more literally on the marquee above the longhorn statue out front: a re-creation of the night the Sex Pistols came to Dallas in 1978. Some of it’s less known, Cabaniss says: the venue’s country-western image has maybe somewhat obscured its historic importance to Black artists and the local African American community in the 1950s and ‘60s. He says grad students working with the Center for Texas Music History at Texas State University turned up old photos taken at the Longhorn showing as much.

“We found a picture of Nat King Cole on the stage, microphone in hand,” in 1954, a decade before the end of legal segregation in the U.S., he says. “An affluent African American crowd is dressed to the nines in the front, and the White people are standing up in the background.” 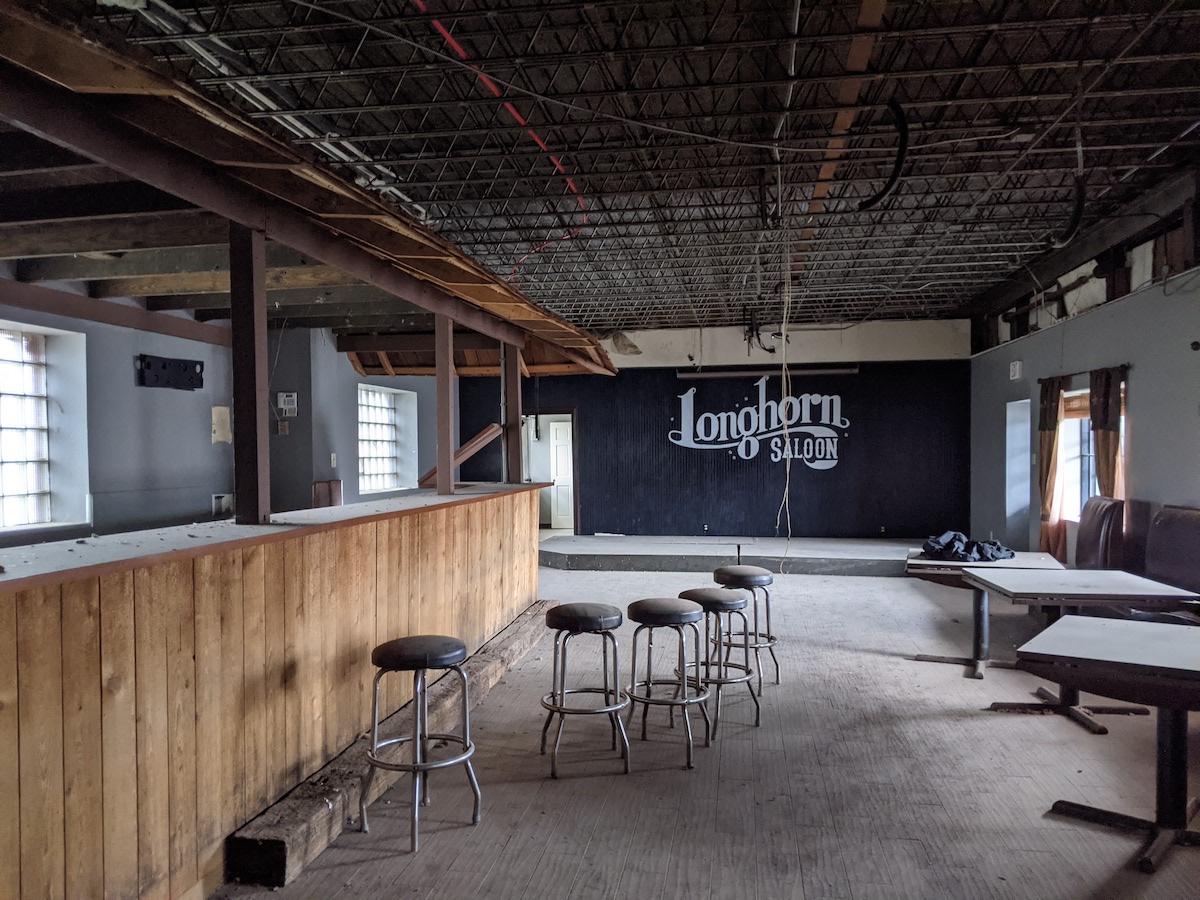 This is inside a building on the Longhorn property that Cabaniss hopes to turn into a sort of creative center for entrepreneurs and hangout for local artists and musicians.
Photo by Alex Macon

The second building on the property, which Cabaniss envisions as a “creative center for entrepreneurs,” is in rough shape. But I see what it could become. He shows me an old bar and a smaller stage that could host more intimate shows, on nights when there’s no high-profile act in the main ballroom. Tenants could rent spaces, co-work, mingle, hang out. You could set up a recording studio, partner with a nonprofit to give studio time to musicians who couldn’t otherwise afford a professional recording job. The Longhorn could be a “tentpole that attracts the creative community” and keeps artists in North Texas, Cabaniss says.

All this on a lonely property surrounded by open space and scrapyards. Developers have in recent years floated other large-scale projects—few of them sure things—nearby, on the southern edge of downtown and in the Cedars. The Longhorn’s comeback, similarly ambitious and also (for now) unrealized, doesn’t depend on nearby development, Cabaniss says.

“I think we can do what we do, irrespective of whether there’s concrete and scrapyards, or whether there’s bullet trains and high-rises,” he says. “We can be an entertainment area that attracts the creative community, and every community needs a place like that.”

I believe him. Now he just has to convince everybody else.