Kevin Sloan To Be Honored With Park Naming

The preeminent landscape architect has left his fingerprints on many Dallas projects.
By Tim Rogers | October 4, 2021|11:56 am
Advertisement

Kevin Sloan is a landscape architect and a mischievous fellow with big ideas. In a handful of meetings I’ve had with him — as he explained how the city was mucking something up, how we should rethink our plans for green spaces — he seemed to me like a guy who had traveled to the future, learned some profound concepts there, and was cheerfully bemused by our struggle to grasp what he was sharing with us. I’ll do the best I can to sum up what I think he was trying to say. It goes like this: leave shit alone! 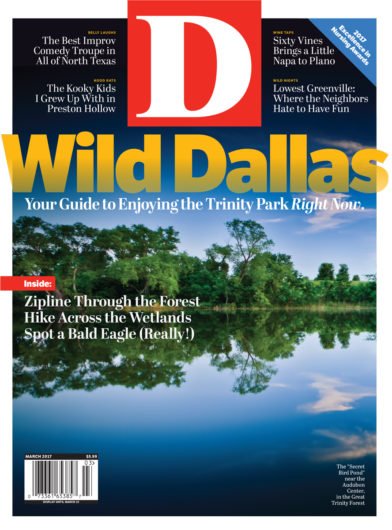 All those grand plans for the Trinity River? Why not just let the floodway do what the floodway wants to do naturally? Let it rewild! Bring back native grasses! Give all those migrating birds a place to stop and rest! In March 2017, we dedicated most of an issue of D Magazine to the notion of rewilding Dallas. Kevin was our inspiration. He contributed a piece to the package of stories, about the system of waterways that we’ve spent decades paving over and how we might rethink our relationship to it.

Kevin has a glioblastoma, a real bastard of a brain tumor. He had a surgery to remove it, but his wife and business partner, Diane, says the tumor spreads through the brain tissue like a spiderweb. Kevin continues his fight, but he’s in hospice. “He’s a warrior,” Diane says. “He’s my hero.”

And he’ll be watching online tomorrow as the Dallas City Council begins its briefing with a Special Recognition of Kevin’s work. Then, on Thursday, the Park Board is set to give the 12th Street Connector Park a new name: the Kevin W. Sloan Park. Both of these honors are richly deserved. I am going to picture Kevin at home, laptop open, watching the mayor pro tem read the text below, as Kevin grins with gratitude and thinks, “Yes, yes. That’s what I’ve been saying. You’re starting to get it.”

Text of the Special Recognition:

WHEREAS, the City of Dallas recognizes the importance of preserving and promoting public parks, green space, and the natural environment for the health and well-being of our city; and

WHEREAS, Kevin W. Sloan, ASLA, M.Arch, Honorary AIA Dallas, landscape architect, college professor, and long-time resident of Oak Cliff, has been a leader in advocating for the creation of urban parks and reclaiming of natural spaces; and

WHEREAS, Mr. Sloan has been a vocal advocate for the resurgence, recognition, and protection of Dallas’ Blackland Prairie habitat, an indigenous and fragile ecosystem; and

WHEREAS, Mr. Sloan conceived and popularized the idea of “re-wilding” the Trinity River Corridor by encouraging the re-establishment of its original flora and fauna; and

WHEREAS, Mr. Sloan conceptualized and spoke nationally and internationally about the Dallas-Fort Worth Branch Waters Network, a bold plan to daylight the expansive DFW watershed network and fundamentally reshape the urban environment;

WHEREAS, Mr. Sloan developed masterplans and designs for parks and trails throughout the City of Dallas that celebrate and encourage human engagement with the natural realm;

WHEREAS, Mr. Sloan has been a professor of architecture at the University of Texas at Arlington for more than a decade, inspiring generations of North Texas students; and

WHEREAS, Mr. Sloan has served the citizens of the City of Dallas by acting as a member and Chair of the city’s Urban Design Peer Review Committee;

NOW, THEREFORE, I, CHAD WEST, Mayor Pro Tem-District 1, and on behalf of the Dallas City Council, do hereby extend special recognition to KEVIN W. SLOAN for his exceptional community work in the City of Dallas.

Former councilwoman Angela Hunt worked with Kevin and Diane. Hunt put together a list of projects Kevin has had a hand in. If you want to feel lazy, have a look:

KEVIN W. SLOAN CONTRIBUTIONS TO THE CITY OF DALLAS AND NORTH TEXAS

The following represents highlights of the contributions to the City of Dallas and North Texas, made by Kevin W. Sloan, ASLA, M.Arch, Honorary AIA Dallas, landscape architect, college professor, and long-time resident of Oak Cliff

• Served on the Urban Design Peer Review board for several years fulfilling the duties of Committee Chair and Vice Chair (2013 to 2020).

• During his work with HOK in the 1990s, did a planning study to look at a park across Woodall Rodgers that would connect downtown Dallas with uptown. (A deck park was a portion of that park but Kevin’s concept was a larger scale.)

• When Klyde Warren Park was first conceived and fundraising efforts were initially underway, park founder Shelia Grant approached Kevin about creating graphics to help donors see the vision of the park. Kevin contacted renowned illustrator Michael McCann to create a series of hand drawn watercolor renderings for such a purpose and assisted him in the creation of these drawings. Ms. Grant has given a great deal of praise to Kevin for his involvement and helping them reach the fundraising goals and make nationally known park a reality. Kevin also assisted McCann again recently when he created more illustrations for the planned expansion of the park.

• Kevin was a part of the SMU planning team that put together the proposal for the George W. Bush Presidential Library. Kevin again teamed up with Michael McCann to create renderings for the proposal. The effort was obviously successful and the Library had its own design team the he was not a part of. As a thank you to Kevin for the work he did, the University awarded him the design of Centennial Plaza to commemorate SMU’s 100th year of existence in 2011. The plaza has become one of the more beloved places on the campus and has been the site of at least one marriage proposal.

• Kevin authored numerous pro bono articles and essays for Dallas-based publications to promote various Dallas design ideas. Those include the “DFW Branch Waters Network” for Columns magazine, a publication put out by the Dallas chapter of the American Institute of Architects. (That article eventually led to the idea of re-wilding the Trinity River floodway.) Kevin highlight his re-wilding concept in an article featured in the March 2017 “Wild Dallas” issue of D Magazine. He was also an opinion piece columnist for The Dallas Morning News writing on several topics.

• Was part of the design team for the Winspear Opera House / AT&T Performing Arts Center and was involved in the early phases of planning and development. An important contribution of Kevin’s was the micro-climate research he did for the area proving there was an almost 40° surface temperature difference between shaded landscape areas and non-shaded paved areas during the summer. This research inspired the architects to add the shade canopy to the building that makes the area a much more pleasant space to be in during our hottest months.

• Was the landscape architect and planner for the award-winning Urban Reserve project in Dallas, a nationally-known modern housing development that had one of Dallas’ first bio-filtering streets. Vanguard Way is a street conceived in section having a dry and a wet side. The dry side slopes to the wet side were the runoff is collected, then goes through a bio-filtering media where the water is then collected in a pond and reused for irrigation of the development.

• Served as the landscape architect for the Dallas Urban Commons project, which is the same developer as Urban Reserve. However this project will contain smaller more economical housing centering around landscape and a creek that runs through the property. The project is currently under construction.

• Since 2005 Kevin has contributed to the education of numerous North Texas architects and landscape architects as a Professor of Practice at the University of Texas Arlington College of Architecture, Planning and Public Affairs. Inspiring numerous designers to careers in which they have had a dramatic impact on the fabric of Dallas and surrounding area.

• Provided pro-bono design work for the Jefferson / 12th Connector project in Oak Cliff prior to being hired as the design landscape architect for the project. This will involve the removal of a dangerous street and replace it with public open space. Kevin and his wife, Diane, live on North Clinton Avenue only two blocks from the project. (It should be noted that while Kevin was technically paid something for the design work it is a fraction of the fee that the firm would get for a project of that size. So it was in no way a money making venture for the firm.)

• Was the landscape architect for Singing Hills Recreation Center which is the only City of Dallas recreation center that is directly connected to a DART Light Rail station. The project includes indigenous Blackland Prairie landscape and an amphitheater / plaza that connects to the DART station.

• Served as the landscape architect for the Casa Linda Playground which is part of Casa Linda Park. It is one of the only playgrounds in that neighborhood.

• Honorary Member of the American Institute of Architects, Dallas Chapter for his contributions to the local chapter.

• Recently completed a landscape master plan for the Friends of the Northaven Trail which will help the Friends group focus their fundraising toward specific areas of the trail. It should be noted that there is a re-wilding component to the master plan.

• Designed the streetscapes and courtyards for numerous multi-family buildings throughout the DFW area, including Novell Bishop Arts and a few Gables properties in Uptown.

• Played a significant role as a team member in the recent Fair Park Master Plan update.

• Significant projects of note that Kevin was involved with, but are not in the City of Dallas, include Vitruvian Park in Addison, Airfield Falls Conservation Park in Fort Worth, the Redevelopment of Downtown Richardson, Lakeside Village development in Flower Mound, the library for the Collin College-Frisco Campus (designed the architecture), The Fort Worth Gateway Project (ground-breaking soon), the Tilley Bridge West bank revitalization (soon to begin construction), as well as many others.

• Nationally known projects in Kevin’s career include the Alamo Transit Mall (streetscape in front of the Alamo) and the former Sprint World Headquarters in Overland Park, Kansas.

• Conceptualized and spoke nationally and internationally about the idea of Watershed Urbanism the Dallas-Fort Worth Branch Waters Network, a bold plan to daylight the expansive DFW watershed and fundamentally reshape the urban environment. This work was recently exhibited in the Venice Biennale in Italy.

• Within the academic context, Kevin has inspired the unique cross-pollination of landscape and architecture into ideas of the constructed landscapes in the built environment. He has been one of the most influential instructors in the University of Texas Arlington School of Architecture for more than a decade.

Dallas’ most important news stories of the week, delivered to your inbox each Sunday.
Diane Sloan Kevin Sloan

Why You Really Can’t Swim in White Rock Lake

Yes, yes. There's the trash and the E. coli. But there's a historical reason, too.
By Tim Rogers
Nature & Environment