Marsha Jackson was happy to see her neighborhood last week. About 50 people sat on folding chairs in a building on her neighbor’s property to see their vision for a park presented in renderings. It has taken years to get to this point, years of fighting to get the city to pay attention to the pile of shingles that grew to six stories and sat adjacent to her property. Jackson became a spokesperson for her neighborhood of Floral Farms and later a plaintiff, trying to get the courts to force someone to do something.

Eventually, they did. The city acquired the property and hired a contractor to haul off 70,000 tons of shingle detritus to the dump. The mountain is gone, but its remnants — lead in the soil “above expected background levels,” the presence of arsenic — can still be found in the dirt. After the city issued its first environmental assessment, Jackson told us that she wanted the city to “pay as much attention to the people as the property.”

One fight after another. But Jackson and her partners haven’t stopped working: they want this land to be a park. Once the shingles started piling up, it’s been tough to go outside in this part of southern Dallas, not far from the city’s southmost boundary. Jackson has had health problems, black gunk in her lungs, shortness of breath, skin rashes. Her neighbors, particularly the kids, stayed inside to try to avoid whatever was in the air.

Now they have something to look forward to. Jackson and her partners — the neighborhood association Neighbors United/Vecinos Unidos, Paul Quinn College’s Urban Research Initiative, the Inclusive Communities Project, the nonprofit environmental activists Downwinders at Risk — teamed with the Dallas-based international architecture and design firm HKS, which began planning for a park as part of its charity arm, Citizen HKS.

They spent most of the year organizing community meetings (in English and Spanish) to learn what the neighbors wanted in a park. Thursday was the community’s first chance to see their priorities visualized in renderings.

“The biggest joy was just to see the neighbors yesterday, the smiles on their faces. Usually they’re kind of quiet and shy, but it’s just different,” Jackson said Friday. “Matt, you’ve been down here. You can just see the difference. We’re a big family, and they’re finally coming out of their shell.”

The park’s renderings depicted a community garden and a soccer field. A trail runs the length of the 4.3-acre space, accented by benches and surfaces for skateboarding and shady spots to relax. There is a playground and an area for food trucks and another space for where the community can actually gather. Jackson reminded me that they don’t have sidewalks, so it’s tough to walk here, particularly considering her home on Choate Road is a tight turn off the busy State Highway 310. The proposed trail would help. HKS’ plans also include a 14-foot-tall grassy mound with seating at the bottom, representative of both the past and future.

HKS Design Researcher Erin Peavey, who led the design team, said she knew this had to be a project that healed. “You can develop beautiful renderings, but if the community wasn’t involved in making them, how do you know that’s what they’re wanting?” she said. “The power had been taken out of their hands for so long that this was about giving it back.” 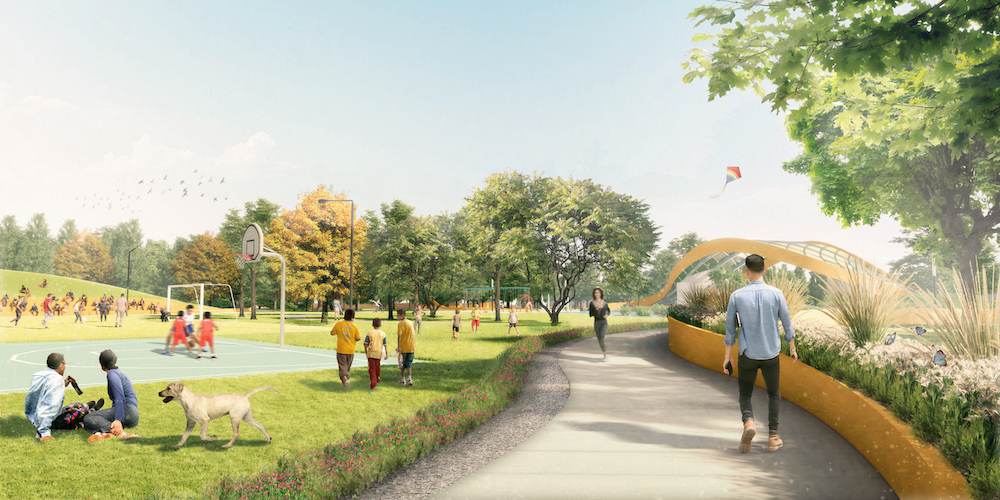 A rendering of the new park at Floral Farms, which will need the city’s blessing.
Courtesy HKS

Shingle Mountain is an unfortunate part of the history of this neighborhood. Jackson and most of her neighbors were there long before the illegal dump. She bought a home in 1995 to raise her kids and their horses. They enjoyed life 20 minutes south of downtown Dallas in a tree-covered part of town that felt like the country. In the years since she moved here, the city’s zoning ordinances have welcomed industry and allowed illegal dumping and wrecking yards to proliferate.

Floral Farms is just north of Interstate 20. The city has been an active participant in running residents off over the years, be that through zoning decisions or eminent domain.

According to a 1992 article in the Dallas Morning News, residents began moving here in the late 1950s, a few years after the city of Dallas annexed the land. By the late 1960s, there were about 100 families here and two churches. Residents could fish in nearby Lemmon Lake as kids “played dodgeball with the knobby fruit of bois d’arc trees,” the article reads. One resident recalls “flowers everywhere,” so much so that students would “flood our teachers with bouquets” every spring.

The city never invested in Floral Farms the way it did elsewhere. Students weren’t bussed to school; they walked along Central Expressway and “hoped somebody picked you up,” recalled one resident.

After heavy rains drowned Simpson Stuart Road and flooded many surrounding homes, the city chose not to install flood protection. Instead, it stopped issuing building permits, preventing residents from repairing or renovating their properties. The city began acquiring houses in the 1970s; one resident moved here “because R.L. Thornton [Freeway] was going right down my living room,” she told the paper. The displaced would soon be displaced once more.

The city ran out of money and stopped buying property, allowing holdouts to stay put into the 1980s. During the height of the neighborhood, that News story describes the same sort of amenities that brought Jackson here in 1995: land, nature, solace, and community.

It’s the people who have made this space special, she says. In 1986, a man named J.R. Gilder started a Black rodeo at the Pig Pen arena, off the nearby Simpson Stuart Road. Gilder had leased lots in the area and he sounds a whole lot like Jackson. “I wanted to get back to the country,” he told the newspaper, describing his decision to locate in Floral Farms. (Interestingly, another Gilder quote echoes present-time: “If I wasn’t out here, you probably couldn’t see the place. They’d be dumping here.”)

In the early ’90s, the rodeo integrated, “Black and white cowboys gallop[ing] together in pursuit of lumbering steers.” Jackson remembers this. It was a place for the community to gather. She would take her kids, who grew up roping and riding horses. Years ago, there was a small farm near her home where farmers grew collard and mustard greens and sold them at the Farmers Market.

“I would like to see that come back,” Jackson says, “not just coming down [neighboring State Highway] 310 and seeing old wrecking yards and junk cars.”

Peavey says she hopes the park project channels some of what made the neighborhood great and provides a place for the residents to be together. That’s where the idea for the community garden came from. The community was also desperate for a soccer field; HKS hopes it will attract teams from across the city while giving the neighborhood somewhere local to play. The second phase of the park will include an equine therapy center, using an existing building on the property. 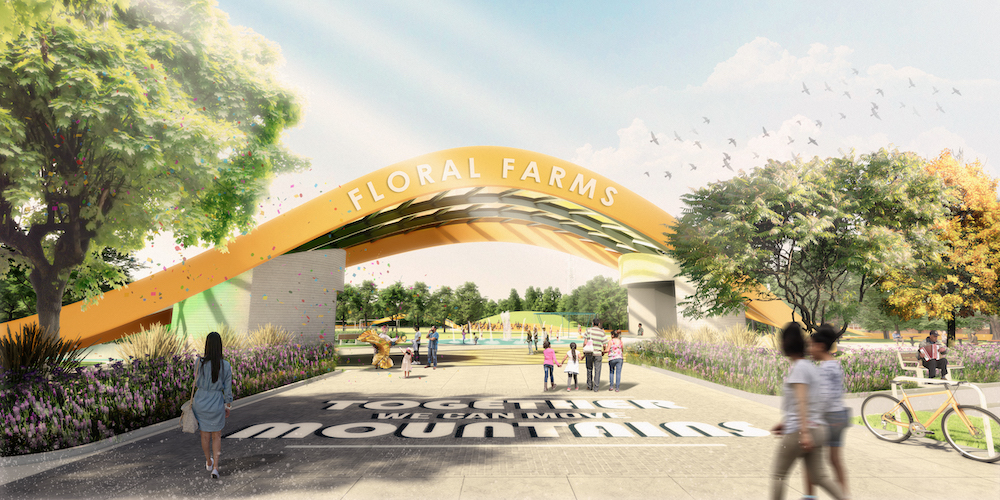 Erin Peavey, who led the design of the park with HKS’ pro bono arm, said she wanted it to help reclaim the neighborhood.
Courtesy HKS

There is much work to do. For one, Shingle Mountain was actually on two lots bisected by a creek. The city acquired the first 4.2-acre plot, but the neighboring 2 acres are still privately owned and will need to be acquired, which will likely only come after the entire area is rezoned. (The community has begun the process to request a rezoning to limit the industrial uses, but there is no timeline for when the city will consider it.) The city will also need to rezone the land to allow for a park.

Meantime, the designs will need engineering to create blueprints. Santander Bank last week presented a check for $100,000 to the cause, but there will still be fundraising to do. Evelyn Mayo, a fellow at Paul Quinn’s Urban Research Initiative, said she plans to reconvene all the partners to determine next steps: Santander, the Dallas Regional Chamber, the Dallas Stars Foundation, and HKS. They’re speaking with Councilman Tennell Atkins, hoping he’ll be a champion for the property’s next life, beginning with the remediation of the land to get the lead and arsenic out of the soil.

“It was just beautiful,” Mayo says, describing Thursday’s reveal. “You don’t expect that to happen within the same year, the mountain to be gone and a vision to replace it so swiftly. I think it’s a testament to everyone’s hard work.”

For once in a long time, Marsha Jackson and her neighbors have some hope. And it literally reclaims their neighborhood of Floral Farms; HKS put the name on an archway over the entrance. The concrete below has a message, too: “Together, We Can Move Mountains.”