The nonprofit management group in charge of Fair Park’s operations is ahead of schedule on fundraising and on track to deliver a new community park by spring of 2024. Fair Park First and its partners gave their annual update to the city’s Park and Recreation Board this week, which celebrated momentum: they’re raising money, the new park’s design phase is moving into schematics, and they’ve held more than 800 community meetings to gather input from surrounding neighborhoods to inform its design.

When the City Council approved the master plan for the overhaul of the 277-acre art deco treasure in 2020, it gave Fair Park First and its partners five years to complete the first phase. The master plan’s cornerstone is an 11-acre community park, which will transform a parking lot at the southeast corner of Fair Park.

This portion, bordered by Fitzhugh Avenue and Lagow Street, was once a neighborhood of about 300 homes that were seized through eminent domain, bulldozed, and paved over. Fences went up, and it was used sparingly for parking and storage for the State Fair of Texas. But the city’s intent, as detailed in a report from 1966, was to force out Black residents so White attendees of the fair didn’t have to see them. In all, 52 acres were taken.

Since then, South Dallas has not shared in the economic success of its northern neighbors. The area became a dead zone, fenced off and inaccessible, nothing but empty, sun-soaked concrete except when cars filled it during events. Brian Luallen, the CEO of Fair Park First, again acknowledged this history in introducing the park.

“This would’ve been an area that was residential that was taken through eminent domain many years ago,” he said. “Here, we envision a front porch that reintroduces the park campus to the surrounding community.”

The design brings in the fence line by about two blocks, providing access that doesn’t involve a gate. Early conceptual designs showed a large civic lawn flanked by play areas, a pavilion, a water feature, and native grasses and trees. Now, Luallen said, the conceptual phase is evolving into schematics.

That civic lawn is now two separate lawns bisected by a stage. There are still picnic areas, playgrounds, and lounges, but the Park Board saw plans that include multiple picnic spaces, an event terrace, a yoga lawn, a terraced garden, an “informal” tree grove, a pavilion, and a fitness loop that traverses the length of the park.

“Our focus has been on the surrounding neighborhoods,” said Ashley Langworthy, a landscape architect and the western region director for Biederman Redevelopment Ventures, or BRV. That company is leading the programming, just as it did at Klyde Warren Park and at Bryant Park in New York. “What aren’t you able to do at home that you’d love to have a space to do in your community?”

More detailed renderings and plans will be unveiled in the next few months, she said in an interview. The plan is to spend the next year continuing community engagement and refining the design. Luallen said the project is on pace to apply for permitting in winter of 2022, with construction beginning in spring 2023. It should take about a year to build, putting the ribbon cutting in the spring of 2024.

Luallen told the Park Board that it entered into the fiscal year having done about 600 public meetings. It’s now up to about 800. Langworthy said the public outreach strategy eschewed onsite events for smaller meetings in the community: conversations with neighborhood associations, churches, and in people’s living rooms. When the pandemic hit, meetings slowed down, shifting online. But this summer was spent presenting those stakeholders with the updated design plans.

“All of this was incorporated into the community park design,” Langworthy said. 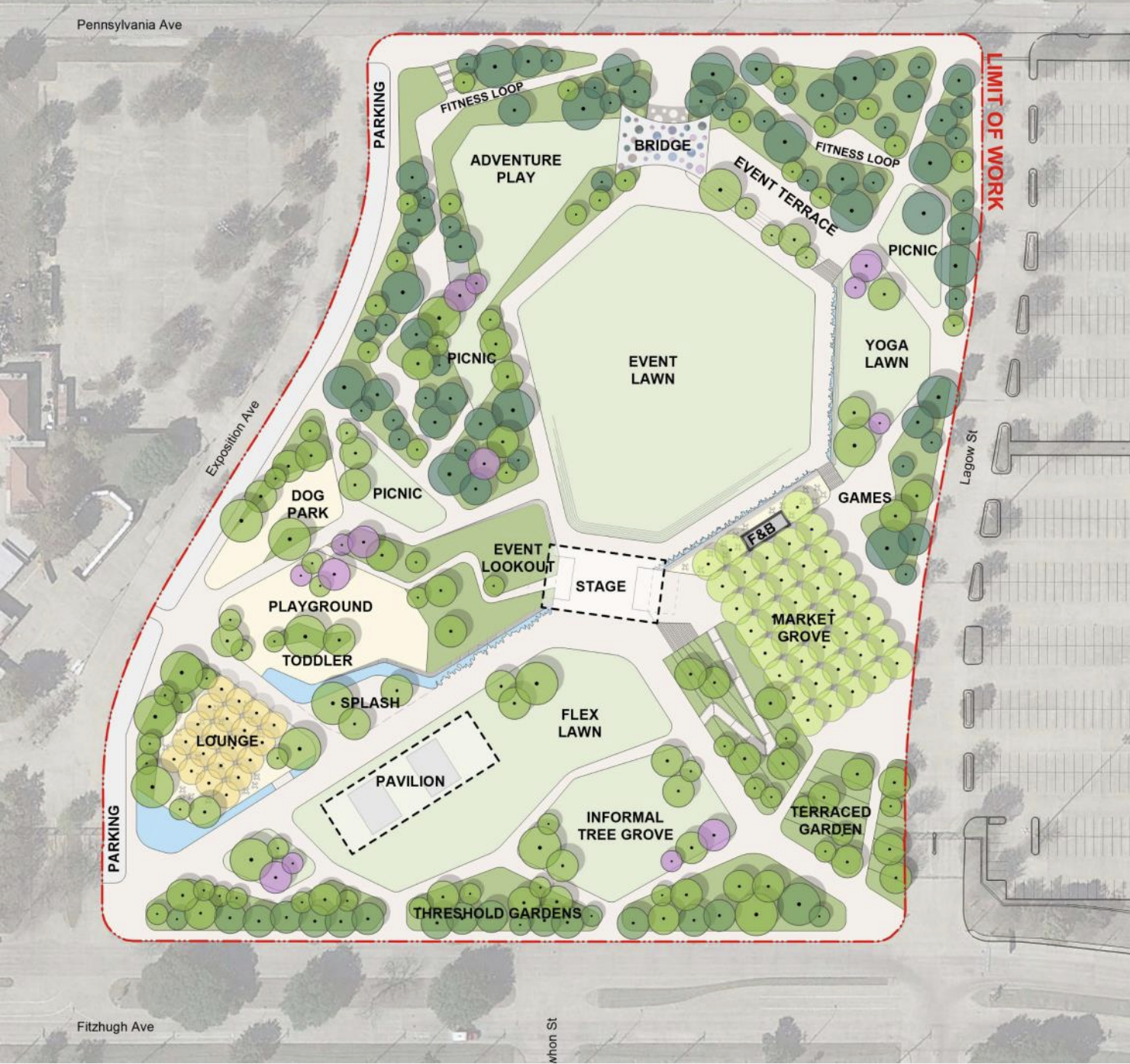 The latest plans for the community park at Fair Park.
Fair Park First

In an interview ahead of the meeting, Dan Biederman, the president and founder of BRV, spoke of the importance of attracting folks to Fair Park before the new design is built: kids meeting firefighters, families joining for board game nights, a fiesta-themed market with performances.

“I have my eye on the esplanade and the lagoon,” Biederman said, referring to amenities inside Fair Park that are often underused. “We should be programming these so people are inclined to walk through.”

All of this costs money, and Fair Park First will need to raise $85 million by 2024. Luallen said they’re ahead of schedule. They met the first year’s goal of $5 million and have $17.6 million committed for the coming fiscal year, which begins in October.

“I have complete confidence we will be able to deliver on the community park and the other obligations with Phase 1 within the first five years,” Luallen said.

Also in that first phase: a parking garage to replace some of the spots taken up by the community park. Gensler is designing the structure, which will be built by local firms VCC and Con-Real. (The latter, a Black-owned business, received praise from the board for bidding to a minority-owned company.) Luallen said the organization has standing contracts with LiveNation and the State Fair that require a certain amount of parking. A study is underway to determine what is actually needed.

A gateway park is also planned at Martin Luther King Jr. Boulevard and Robert B. Cullum Boulevard. Design is ongoing.

And Fair Park, meanwhile, has been busy. Nonprofits handed out 600,000 pounds of food during the pandemic and vaccinated more than 100,000 people. Events are planned nearly every weekend, from small athletic competitions to the CONCACAF Gold Cup to a Rolling Stones concert. Spectra, the corporation charged with booking the park’s venues, said it has saved the city $21.4 million in operating costs since it took over.

And Fair Park recently won designation as a Texas Cultural District, which makes basically all of South Dallas’ cultural venues eligible for up to $500,000 in grants and funding for marketing purposes.

“People are excited about this,” said Calvert Collins-Bratton, the president of the Park Board. “They really feel that it’s real, that it’s not just pie in the sky.”