Jim Schutze hadn’t re-read his book, 1987’s The Accommodation, in many years. When he finally did, he found the voice of an angry young man in its pages, a recent Detroit expat who couldn’t believe the smug complacency with which his new city ignored its racial strife. Racist policy in Dallas wasn’t even recent history when he got here in 1978. Even then, a landmark desegregation case had been working its way through the courts for the past eight years and would continue for another two decades.

Schutze felt that few wanted to talk about this—or of the violence of the Ku Klux Klan throughout the early 1900s or the bombings of Black homes in the 1950s or the city-sponsored land seizures that paid Black families pennies on the dollar for their land and property. Segregated housing projects soon proliferated; generational wealth was wiped away in a flash.

The Accommodation is about how hard the business class of the time, led by what was a White civic group known as the Dallas Citizens Council, worked to keep all this quiet. The book was meant to offer reality amid a disingenuous mirage of harmony.

Schutze reflected on the book Tuesday on a stage in the ballroom of the Pittman Hotel, which was once the beating heart of the city’s Black middle class. He shared that stage with longtime County Commissioner John Wiley Price, who scooped up the book’s rights after it was muzzled by the same actors that had worked so hard to falsely mold Dallas’ image into a city of racial peace.

Tuesday’s event, organized by the powerful fundraising nonprofit Communities Foundation of Texas, was to commemorate the re-release of The Accommodation by local publishing house Deep Vellum. It is a text that in recent years has been branded “incendiary” and “dangerous,” a work that had its plates literally pulled from the presses ahead of its original publication because, as lore goes, the head of the Citizens Council ordered its publisher not to let it get out the door. It was born again about seven years ago, when a bootleg PDF copy of the long out-of-print book started getting passed around among young Dallasites who wanted to hear this history.

The Accommodation focused on a deal the city’s business class made with Black clergy that effectively created a segregated middle-class Black neighborhood called Hamilton Park, in North Dallas. It was a way to keep the city’s racist violence out of the public eye. Dallas didn’t want to look like Birmingham or Selma.

“There was a story that Dallas had never had any racial upheaval, that everybody loves things the way they were,” Schutze said.

He arrived in 1978, seven years after a federal judge found that Dallas’ schools were still de-facto segregated. Brown vs. Board of Education became law in 1954; the school district didn’t implement a desegregation plan until 1961, making it the South’s largest city with a segregated public school district. It began addressing this only after getting harangued by a federal judge.

Dallas ISD declared its system desegregated in 1967, which was challenged by parent Sam Tasby three years later; two of his sons were not allowed to attend a “White school” in North Dallas. That lawsuit would take more than 30 years to wend its way through appellate courts.

Schutze would complain to his fellow “Yankee carpetbaggers” at the Dallas Times Herald about how the city wouldn’t talk about any of this. Even they made him doubt his assumption. And then he heard Price on the radio for the first time. Back then he was a young clerk to Justice of the Peace Cleo Steele, and he had been presented as a “Black man” who “disagrees” with whatever story the station was airing.

“He was saying, ‘This city is not going to stay the way it is, and I’m going to see that it doesn’t,’ ” Schutze said. “I looked him up so fast that we had lunch that day. And in the ensuing years, I watched him really pull the city forward singlehandedly for a long time.

“When I left Detroit in 1978, everyone was John Wiley Price,” Schutze said. “When I came to Dallas, there was only one guy in the city who was John Price.”

Price has served as a county commissioner since 1985. His message, just as he writes in the foreword of the book, is how little has changed in terms of equity and health outcomes. Some parts of the city still lack adequate water and sewage infrastructure; just five months ago, the city announced it would be spending a chunk of its federal COVID relief dollars on “water, sewer, and broadband infrastructure.” 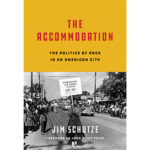 The Accommodation: The Politics of Race in an American City

“Dr. Martin Luther King talks about all kinds of social injustice. He said, ‘But healthcare is the most egregious,’” Price said. “And here we’re talking about your ZIP code determining the length of life.”

After they detailed the fraught history of its original publication, the two men spoke about the decisions local leaders made to create what Schutze called an imaginary “Mason Dixon line across the middle of the city.”

Schutze says Tuesday’s event was the first time he and Price ever discussed the book, publicly or privately. The momentum and appetite for the book is clear. And maybe that is its legacy: waking up the city to what really happened here, forcing elected officials and other leaders to address this history and the city it left in its wake.

Will Evans, the owner and founder of Deep Vellum, deserves major kudos for making the book available again. Now Dallas residents can easily find it and begin to see where the inequities began and proliferated—without squinting at a scanned PDF or having to pay hundreds of dollars for the older edition of the book.

Jerry Hawkins is the executive director of Dallas Truth, Racial Healing, and Transformation, an anti-racist nonprofit that advocates for the city to craft policies that will help achieve racial equity. He closed the evening, recalling how he once read one of the PDFs of Schutze’s book that were passed around.

Hawkins hosted a book club that lasted six months and attracted hundreds of residents. They read it slowly and discussed it in detail. He urged all in attendance Tuesday night to really analyze what is inside The Accommodation’s pages, the stories that went untold for so long and then were subject to censorship once they were arranged in a fixed narrative.

“Racial equity is about changing the material conditions of people who have been oppressed,” he said. And then he left the room with a challenge: “Read it, and do something.”