It’s right there in the name, but people often forget that light pollution is a pollutant. There is ample evidence of the negative effects of artificial light on plant and animal ecosystems as well as human health.

“Not to mention the psychology of our kids in the city never really seeing the night sky,” says Benjamin Jones, the executive director of the Texas Conservation Alliance.

For birds migrating in the spring and fall, light pollution is a deadly problem. Texas is at the heart of the Central Flyway, a major migratory route in North America. Our skies essentially become a habitat for hundreds of millions of birds. But these birds are attracted to and confused by artificial light, which can draw them out of their migratory patterns and into a whole host of dangers. Downtown Dallas, with its bright lights, glass reflections, and hard surfaces, is especially hazardous. Next to Houston and Chicago, Dallas is one of the most dangerous cities in the country for migrating birds, according to the Cornell Lab of Ornithology.

That’s why the Texas Conservation Alliance—with Texan By Nature, Audubon Texas, Cornell, the Perot Museum, and Texas A&M, among others—has launched Lights Out Texas. It’s an initiative that urges Texans to turn off non-essential lights between 11 p.m. and 6 a.m. in April, May, September, and October, through peak migration. It kicked off last year (with support from former First Lady Laura Bush) and has since grown into Lights Out efforts in cities including Austin and Houston. Some of the skyline’s brightest buildings went dark or dim to help protect migrating birds.

Jones, with other conservationists and volunteers, spent last fall and this spring surveying downtown Dallas. Every morning, they would set out to collect and count overnight bird deaths. It’s the first time this sort of data has been collected in North Texas. The dataset will grow this fall, when surveyors will be able to compare the results from season to season. Jones also cautions that there are a number of complex variables at play. But the results of their survey efforts so far show both the scale of the problem and the early growth of the Lights Out Texas initiative. 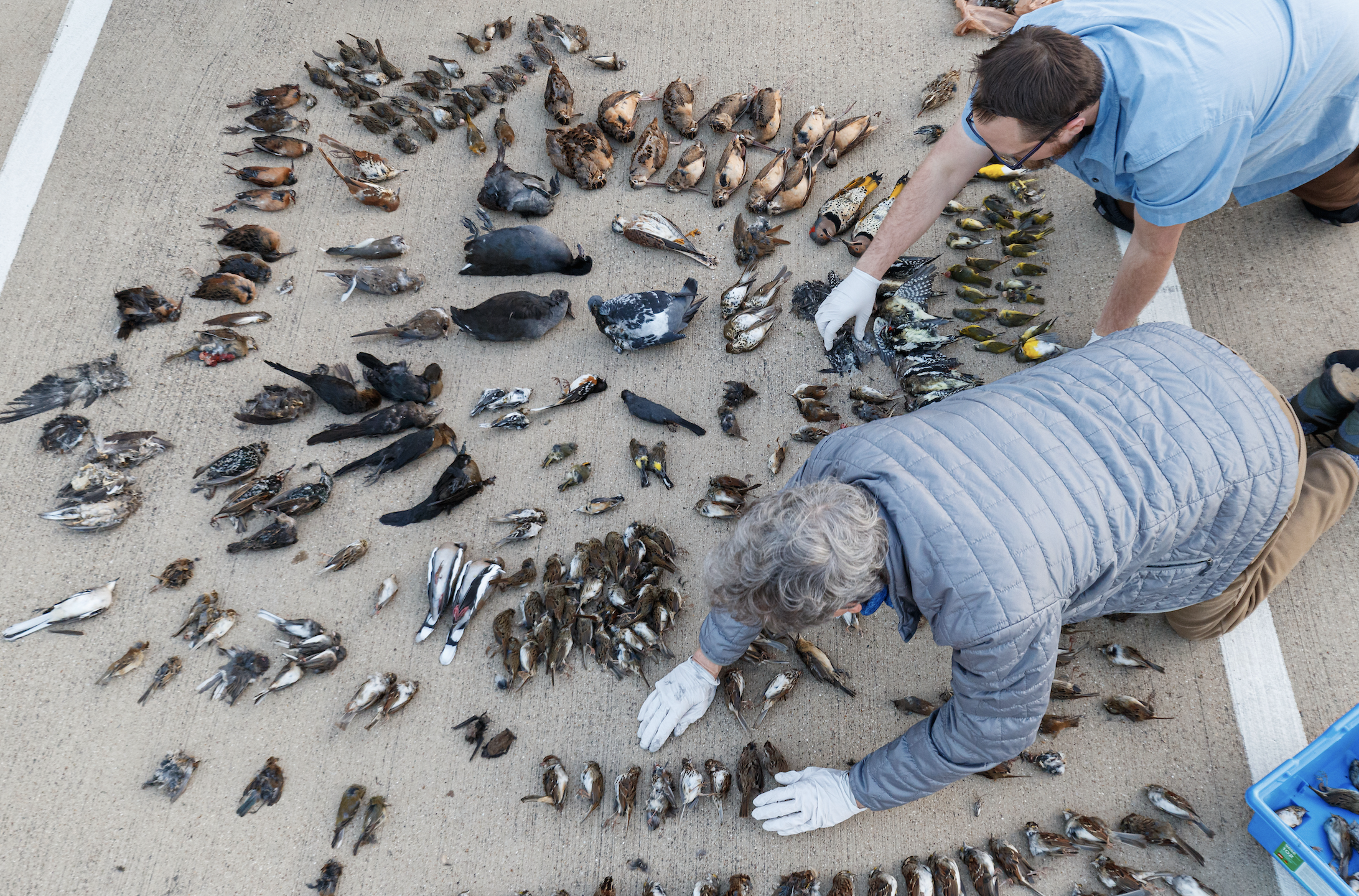 In the spring and fall, conservationists and volunteers fanned out across downtown Dallas to document fatal bird collisions with buildings. They counted more than 600 mortalities and at least 73 bird species affected by light pollution.
Photo by Sean Fitzgerald, courtesy of Lights Out Texas

In the fall, surveyors logged 457 bird mortalities downtown; 13 buildings agreed to shut off nonessential lights overnight. This spring, they counted 233 deaths as 23 buildings participated in Lights Out nights. Between both seasons, researchers found 73 different species of birds on Dallas’ streets. Anywhere between 300 million to 900 million birds are killed in building collisions every year in the U.S. It’s the leading cause of death for birds behind habitat loss and feral cats.

Even a single building going dark can have an exponential effect, Jones says. In downtown, reflected light from one building can register blocks away. “The amount of light a building emits is more strongly correlated to bird life collisions than its height,” he says. “That’s how critical the light issue is.”

Jones says conservationists will continue collecting data and encouraging residents and business owners to turn off their nonessential lights in the spring and fall. The emphasis is on nonessential. “Often what comes up is tension between public safety and saving birds, but that’s a false dichotomy,” Jones says. Outdoor lighting can be cast down, with a cover over the top. People can draw their blinds and close their curtains. The exterior LED lights that define many of downtown’s buildings aren’t making streets any easier or safer to navigate.

“It’s an easy conservation action,” he says. “A lot of times conservation can require real sacrifice; you have to weigh it out.” This is more of a no-brainer, he argues.

In the spring and fall, something special happens in the sky.

“It’s like a bird superhighway pouring hundreds of millions of birds overhead some nights,” Jones says. “It’s incredible to think about.” We can throw that into chaos and send millions of birds to their deaths. Or we can turn off our lights for a few nights in the spring and fall.

Yet Another Thing We’ve Screwed Up in the Trinity Forest

Dallas Is a Great City for Birdwatching