A stagnant vaccination rate and the more contagious delta variant of COVID-19 are putting anything resembling an “end” to the pandemic further and further out of reach. COVID cases and hospitalizations are again ticking up in North Texas. According to UT Southwestern’s most recent forecasting, hospital volume has doubled over the past two weeks and is up 230 percent over the past month. This week, the Centers for Disease Control and Prevention issued new guidance that everyone, including people who have already been vaccinated, should wear masks indoors in places with a high amount of community spread. That applies to Dallas. (Following rules set by Gov. Greg Abbott, there are no government-imposed mask mandates in Texas.)

The vast majority of serious illnesses and deaths from COVID-19 are now among unvaccinated people. Getting the jab remains the best way to prevent the spread of the virus, and to protect yourself and others. Only about 52 percent of Dallas County residents over the age of 12 have been fully vaccinated; children younger than that are not yet permitted to receive the vaccine, making them particularly vulnerable to infection.

That’s why health and government officials are increasingly asking themselves the question: How do we convince people to go get the jab? Dallas County has held pop-up clinics. Mayor Eric Johnson has raffled off Cowboys tickets and airline flights to people who get vaccinated. UT Southwestern has put out a guide with talking points to help convince your patients or your friends and family members that getting the vaccine is the safe and responsible thing to do.

Steve Miff, CEO of the Parkland Center for Clinical Innovation, told D CEO this week that area businesses and employers will be key. “Employers are going to put mandates, create meaningful and strong incentives, or penalties for the employees,” he said. “That’s likely the biggest bump that we’ll get in vaccinations.”

Sure enough, Baylor Scott & White said Wednesday that it was requiring all of its 40,000 full-time workers to get vaccinated.

Private sector businesses have been slower to adopt such measures. Others may follow with similar incentives, but regardless, many of Dallas’ employers are already playing a role in pushing the shot. The Dallas Regional Chamber, the area’s largest chamber of commerce, earlier this year launched a $1 million pro-vaccination campaign. As early as January, the chamber began developing an initiative with the Boston Consulting Group.

“We [wanted to] put together a program that would help this community learn how to get vaccinated so that we would get the economy back to life, and really help the small businesses, many of them restaurants and dry cleaners and other places that require face-to-face interaction,” says Dale Petroskey, the chamber’s president and CEO. “When you’re a sole proprietor, your livelihood and your business are one and the same. If your business goes down, basically your life goes down.”

According to the chamber, the pandemic drove small business revenue in Dallas down by 31 percent, and about one in three small businesses in North Texas have been forced to close their doors. While a vaccination campaign may seem out of the typical purview of a chamber of commerce, Dallas businesses have skin in the game when it comes to ending the pandemic. There is a high cost to North Texas’ low vaccination rate.

The chamber was in a unique position to help with a vaccination campaign, Petroskey says. Companies like Toyota, Pepsi-FritoLay, and Target were tapped to help write a request for proposals to lead the creative development of a PSA campaign. The group took its cues in part from local medical institutions like Parkland and UT Southwestern. The public relations firm Edelman was chosen over seven other candidates to develop marketing materials, video and radio ads and the like. JBJ Management was brought on to head up what the chamber call its “ground game,” an effort that would focus on pop-up events and direct outreach.

The people developing the campaign understood there are many reasons why someone might not get vaccinated. Many people don’t trust government officials or the media. Misinformation circulates easily. Institutional barriers and racial disparities in healthcare access have further complicated the country’s vaccination campaign.

There is a small but vocal contingent of people who have—for political or ideological reasons—become staunchly, uncompromisingly anti-vaccine. But there is a bigger “moveable middle,” says Petroskey.

In the spring, as vaccine demand became more of a problem than supply, the chamber changed its focus from “how” to “why.” By the time the campaign began to roll out in June, the “Take Care of Business” message was set. “Getting your family vaccinated keeps this family’s door open,” reads a social media ad. “Getting the vaccine isn’t just about protecting people, it’s about protecting paychecks,” says a video PSA. Ads like this run in English and Spanish online, on billboards, on TV and radio, and in grocery stores, pharmacies, and doctors’ offices.

“There wasn’t anything else out there,” says Jessica Heer, the chamber’s senior vice president of regional marketing and talent attraction. “There were presidents talking about this and public officials saying that. We were talking about: This is about people. This is about our livelihood as a region and as a place.”

The campaign developed printable informational posters for offices and talking points for executives (“Working together, we can protect the health of everyone in our community—and get the Dallas Region back to business”) to further give businesses some tools of persuasion.

“It’s really a business enablement campaign, which is our bread and butter,” Heer says. “How can we help our members and our employers with the information they need to communicate to their employees about the importance of vaccinations?”

There was a sweepstakes: Get vaccinated and win Cowboys tickets, Mavs tickets, concert tickets, free flights and other prizes.

“At a high level, it’s proven that incentives do work, whether it’s your employer giving you a $100 gift card or entering you into an employer raffle,” Heer says. “And I know that our ground game has been very successful.”

Much of the chamber’s campaign has focused on communities of Black or Latino residents, where the effects of the COVID-19 pandemic have been disproportionately felt and many are at high risk from the virus. To that end, the chamber’s been working directly with faith groups and local organizations to organize pop-up events and more personalized outreach, says Latosha Herron-Bruff, the chamber’s senior vice president for community engagement.

“I think having those trusted voices and those trusted community organizations host these events, that matters,” she says. “The days of the big events where you expect hundreds of people to show up and roll up their sleeves and get vaccinated, that’s gone. So our focus is really specific and very intentional about who we’re trying to target.” 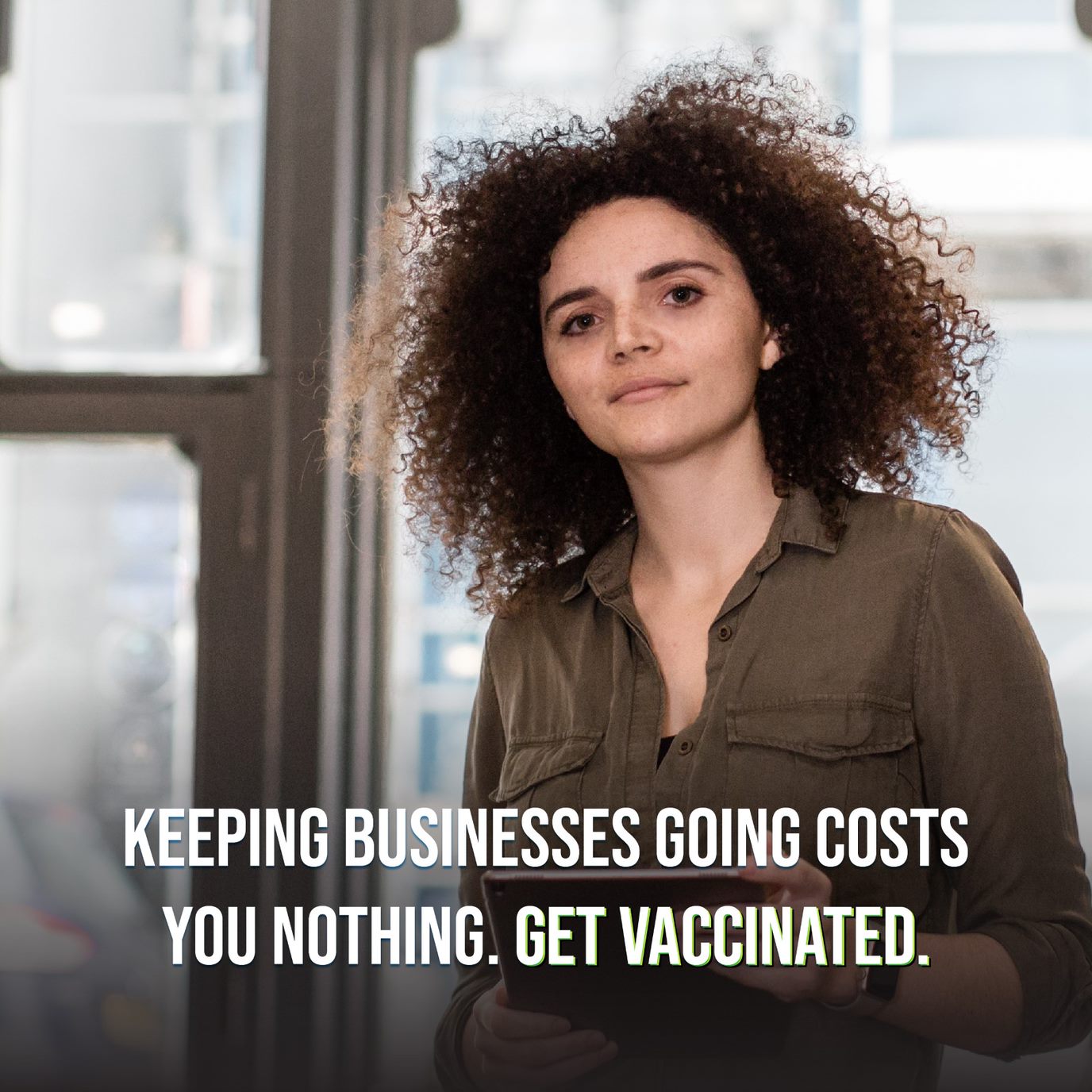 A social media ad used in the DRC’s vaccination campaign.

That has involved bringing out mobile vaccination units with medical professionals who can speak directly to people who are skeptical about the vaccine. So far, campaign organizers have been a part of more than 70 vaccination events, partnering with providers including Baylor Scott & White, Gene IQ, and MDLab.

“They’re actually going out and talking to people about their hesitancy, about their doubt,” Herron-Bruff says. “We’ve seen it, amazingly, how people turn it around by having a conversation and helping people work through what they thought about getting vaccinated. Those really intimate settings, the smaller onsite events where the community is actually leading it, have proven successful.”

Troyrika Terrell took some time before getting the COVID-19 vaccine. A 48-year-old single mother who lost her job as a student adviser during the pandemic, Terrell was diagnosed with breast cancer several years ago. She’s undergone five and a half months of chemotherapy and 21 days of radiation. “I am a survivor,” she says.

She had worried about possible side effects of the COVID-19 vaccine, but decided to get her first dose this summer at an event run through the Dallas Regional Chamber’s campaign. It was held in Oak Cliff, in the neighborhood where she grew up. Her 83-year-old mother and 18-year-old daughter joined her.

Terrell had heard the stories on the news of hospitalized COVID-19 patients asking hospital workers for the vaccine, when it’s too late. A friend told her about the chamber vaccination event. And she listened to her daughter.

“She was just like, ‘Mom, I think we really need to go ahead and get this shot,’” Terrell says. “She’s getting ready to go to college. She was like, ‘We’re around Granny. Everybody needs to do it.’”

Since the Dallas Regional Chamber launched its vaccination campaign on Jun 9, about 274,038 people over the age of 16 have been vaccinated in Dallas, Tarrant, Collin, and Denton counties, about 50,000 of them in the last week. There is a lot of work to do, and metrics for success that can be measured by the number of shots in arms. The campaign continues: chamber officials described partnering with businesses on mobile vaccination clinics, and strategizing for the fall, as health officials weigh the potential need for booster shots for the already vaccinated.

It’s almost a cliché at this point that the pandemic has shown how much we all depend on each other. Fighting a contagious virus that affects all of us takes all of us. Public officials can make the case for getting vaccinated. Employers can dangle incentives and consider mandates. Chambers of commerce can organize wide-reaching vaccination campaigns. All of us can talk to our friends and family members who haven’t been vaccinated.

If all else fails?