Sha’Carri Richardson somehow contains an abundance of both humility and self-confidence. Look first at her Instagram, which is filled with mirror selfies, photos of the few times she has been able to go out with friends this past year, some Nike promo images, posts about the Black Lives Matter movement, and a handful of photos from track meets and training. In her captions, she encourages her followers to embrace themselves and their own personal journeys.

She’s clearly an athlete, but it doesn’t necessarily convey that the 21-year-old Dallas native is the sixth fastest woman in history.

“With my platform I definitely want to be able to show that I am just a normal person, I just happen to run faster than a lot of the population. But other than that, I am still a human being,” Richardson says. “I just want to show the younger generation, that you can be who you are and be successful. You can just be your authentic self.”

In April at the Miramar Invitational, Richardson ran the 100 meter dash in a blistering 10.72 seconds, earning a spot in the history books alongside some of track and field’s all-time greats. Those include Jamaicans Shelly-Ann Fraser-Pryce and Elaine Thompson Herah, each of whom Richardson could face off against for Olympic gold in Tokyo. (Fraser-Pryce two weeks ago clocked the 100m in 10.63 seconds, the second fastest time in history.)

Richardson is right up there with American legend Florence Griffith Joyner, a frequent comparison considering the 21-year-old’s vibrantly colored hair, bright nails, and bold style. (“I am not trying to be  the next FloJo,” Sha’Carri says in response to these comparisons. “I am trying to be the one and only Sha’Carri Richardson.”) She followed up this feat by clocking times of 10.74 and 10.77 at the USATF Golden Games in May, the latter of which was dashed into a 1.2 meter/second headwind, the fastest time ever recorded going into that much wind.

Despite her success, Richardson keeps her eyes on what is in front of her. Like the Olympic trials, which begin tonight in Eugene, Oregon. “I still have to make the team at Olympic trials in Oregon,” Richardson says. “But as long as I qualify, in Tokyo, I just want to go there and perform to the best of my abilities and to do what my coach and I have been working on and hopefully all of that preparation will help me produce a winning time.” 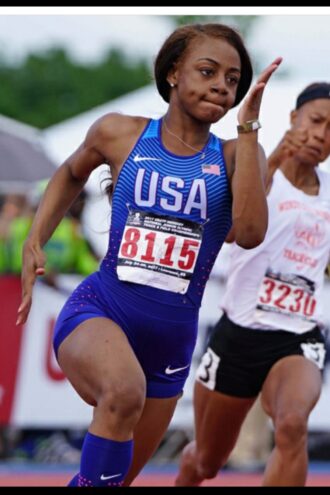 But before there was any talk of Olympic medals or even state championships, the David W. Carter High School graduate was just a little girl who wanted to run. Sha’Carri began running when she was 9 years old after finding some old track medals belonging to her aunt, Shayaria Richardson.

“She tried cheer and dance and she was a tomboy, so she would always be outside with the boys playing football, but running was what stuck with her,” Shayaria Richardson says. “I knew right from the start that we were going to be in it for the long haul. She was committed. I would get home from work and she would ask me to take her to the track.”

Her niece’s dedication quickly manifested in results, notching wins at major regional and state track championships as a middle schooler and high schooler. In her sophomore year of high school, Sha’Carri won the Texas State Championships in the 100m, earning the title of “fastest girl in Texas.”

Although Sha’Carri did not voice Olympic aspirations as a child, she made it clear to Shayaria that she wanted to be great.

“Freshman year of high school she was injured, but she didn’t let that get her down, she was determined to come back stronger and better,” Shayaria says. “Through that experience I knew she had what it took to go all the way.”

Sha’Carri considers this mindset of greatness to be her biggest asset as an athlete. “I never wanted to settle with just being okay, just being good,” she says. “I want to make sure that when I leave this sport, that I put everything on the table and that I accomplished everything that I was called to do.”

In her pursuit of greatness, Sha’Carri made the decision to relocate, first to Louisiana State University in 2018. She set a new 100m world record among racers 20 or younger at the 2019 NCAA Track and Field championships with a sizzling time of 10.75 seconds. Then it was on to Monteverde, Florida, in 2019 to train with Dennis Mitchell, an Olympian who won gold in the 4 x 100 relay race in the 1992 Olympics.

“I knew I wanted to reach that next level,” Sha’Carri says. “I knew that I had to make myself somewhat uncomfortable and just change my environment for me to understand that this is really serious.”

Although it has been hard for Sha’Carri to be away from her family—and she admits to missing Whataburger and tacos from Fuel City (“You can’t get tacos like that anywhere else in the world,” she says with a laugh)—she believes the move was the best decision she could have made. She’ll get to prove it in Oregon this weekend.

She hopes to keep running as long as she can. But she does have aspirations to one day become a sports psychologist. Her interest in the field came partially due to her experience as an athlete, but also due to her own mental health.

“I feel like mental health in sports is ignored a lot and for me being the athlete I have been and continue to strive to be, I definitely know that your mental health directly correlates to your ability to achieve your physical goals,” Sha’Carri says. “I want to make sure that it is something that is addressed and that there is more awareness of it.”

In the meantime, as she pursues her career on the track, Sha’Carri plans to continue to use her social media platform to advocate for mental health and encouraging her audience to practice self-love.

And there should be no doubt that Sha’Carri Richardson is great.