Enjoy unlimited access to all of our incredible journalism, in print and digital.
Subscribe Now
Advertisement
Restaurants

Living in McCities: A Map of Chain Restaurants in Dallas

About 40 to 45 percent of restaurants in the Dallas-Fort Worth area are chains, according to a new mapping project.
By Alex Macon | June 22, 2021|11:33 am
Advertisement

Bloomberg CityLab today points us to a fun little map measuring the prevalence of chain restaurants in U.S. cities. Developed by researchers at the Georgia Institute of Technology, the map was built using data on hundreds of thousands of restaurants. Taking the bird’s eye view, about 40 to 45 percent of restaurants in the Dallas-Fort Worth area are chains, according to this project. Look a little closer, and we can see where they are. The red dots are chains, yellow dots independent restaurants. 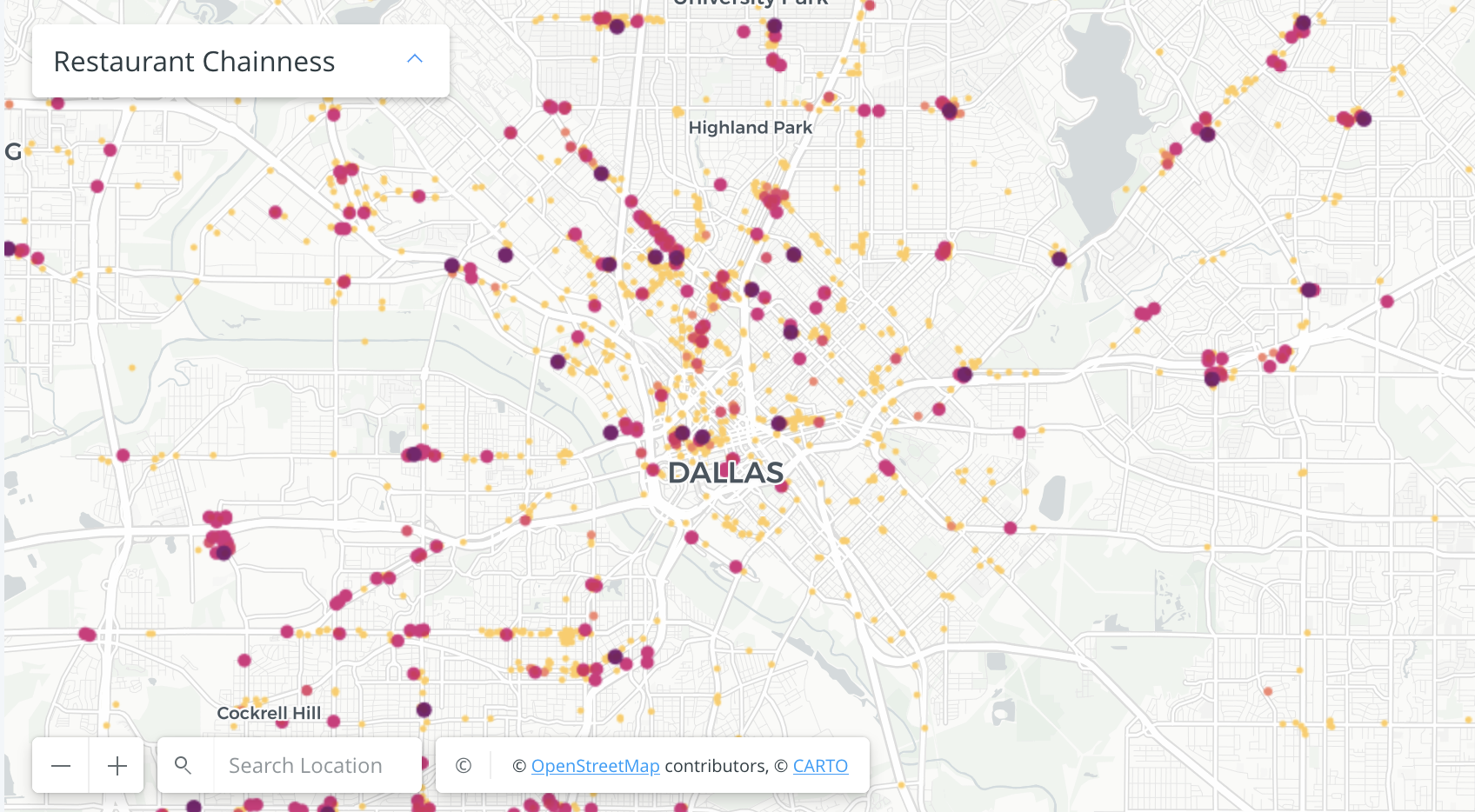 The researchers also created a metric they call “chainness,” basically a measure of how frequently a chain appears. Taco Bell, for example, has a high chainness. A regional chain, like Torchy’s, a lower chainness. What do we learn from this? From the report:

We found that car-dependent small towns, low walkability, a high percentage of African American residents or Trump voters, college towns, and close distance to highways were associated with high chainness. These places tended to be prevalent in the Midwestern and the Southeastern U.S. Independent restaurants were associated with high pedestrian walkability, high population density, Asian, Hispanic and majority-White neighborhoods, tourist areas, areas with urban professionals, and retirement communities. They were also found in coastal cities and waterfronts. These findings, paired with the contribution of a method that quantifies ‘chainness’, opens new pathways for studying landscapes through the lens of commercialism and the service economy.

A paper by the researchers—Clio Andris, assistant professor in the Georgia Institute of Technology’s School of City and Regional Planning, and graduate student Xiaofan Liang—goes into greater detail on the connection between chain restaurants and a “culture of placelessness.” The researchers argue that chainness creates “McCities” in a landscape “associated with mourning, feelings of loss, a lack of meaning, and lack of attachment for those who experience the locale.” Words that will haunt me the next time I’m sitting in my car eating a Big Mac. Read more here.

Find Mocktails at These Dallas Bars and Restaurants

Today, June 25, is Anthony Bourdain Day, which is the late chef and world traveler’s birthday. Let’s look back at some of ways the beloved culinary thinker touched Texas.
By Rosin Saez
D Magazine Directories