In 1997, the fenced-in Northend Dallas apartments didn’t occupy an important connection between Victory Park and Uptown. The 540-unit apartment complex went up on 11 acres here decades before this part of Dallas went vertical with dense development. Now the city agrees it is time these apartments come down, replaced with something that makes more sense in its present surroundings.

The City Plan Commission last week unanimously approved what the landowner, Hunt Realty, has planned for these 11 acres. Hunt is now one council vote away from rezoning land bordered by Houston Street, Field Street, and Nowitzki Way to pursue an ambitious mixed-use high-rise development that its executives believe is a far better fit for this part of Dallas. At least 1.5 acres of public green space would be flanked by skyscrapers and a low-rise building made of timber. Hunt hopes to tie Victory Park to Uptown through what it has branded an “urban arboretum” that will exist in the middle of the property and contain pedestrian connections to points beyond it.

The project is in a very early stage of planning. The city’s approval is pending a conceptual master plan, which will likely dictate how many buildings there can be, how high they can go, how far apart they can be from one another, and their distance from the street and sidewalks. The company has suggested in news reports heights of more than 80 stories, which existing zoning allows. (Existing zoning also only allows multifamily on this plot, which necessitates the zoning change.)

Hunt anticipates the project will take 20 years to complete. It would include office, retail, hotel, and housing. The development includes ground-level rental space facing existing streets like Houston and Field, but the skyscrapers will likely open to the park. During the plan commission meeting, the company said it was aiming to reserve 5 percent of its units for residents making between 51 percent and 60 percent of the area’s median income. (That would be about $27,050 to $32,454, per the city’s data.)

As this land exists today, a black fence surrounds the apartment complex, blocking access from all directions. That needs to change.

“It is the epicenter of the Victory Park, Uptown, Katy Trail, Klyde Warren Park, Perot Museum, and the [American Airlines] Center,” said City Plan Commissioner Wayne Garcia, who represents downtown and Uptown in District 14. “You guys have the opportunity to make this the center point of everything.”

DART’s planned D2 subway line will have a stop nearby, which the developers are including in their plans. Too, the planned Hi Line Connector will connect the Katy Trail to the Design District, making the bike lanes along Houston Street an important bridge. The plans include sidewalks with widths of between 8 and 12 feet. Further, Houston Street also leads into the West End and farther south to the old Dallas Morning News headquarters, which is slated for its own mixed-use overhaul. 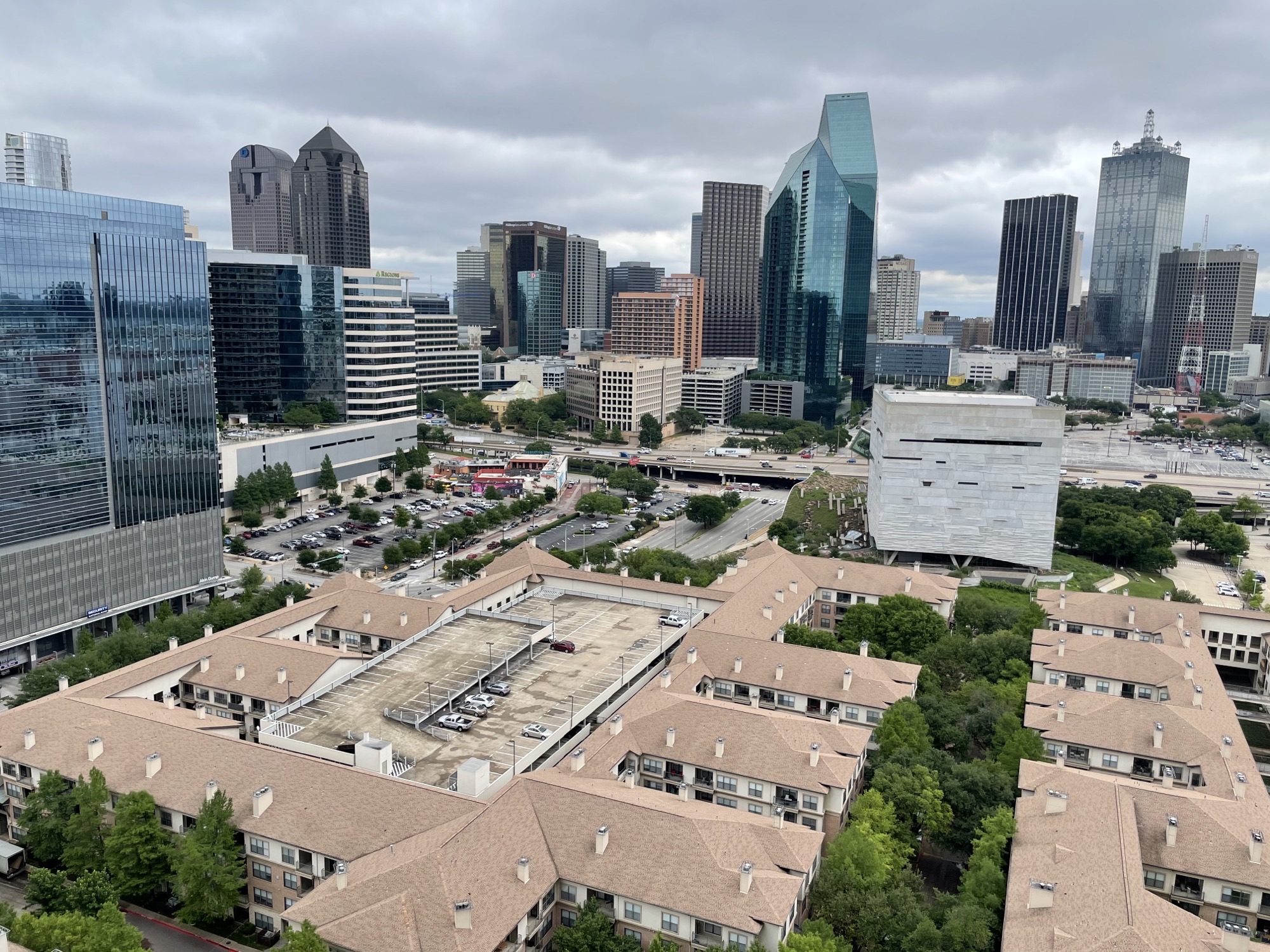 The current view of the 11 acre Northend Apartments, between Victory Park and Uptown, as seen from a unit in the W.
Matt Goodman

Hunt Realty President Colin Fitzgibbons says the company began planning in earnest for the development in May of last year, when COVID had locked us all inside. Hunt hired New York-based architecture firm Kohn Pedersen Fox, the shop behind New York’s Hudson Yards and Tokyo’s Roppongi Hills, to design the project. Fitzgibbons said he hopes the project stands out because of the park in its center, which he says will be designed to feel like a public amenity instead of a private one for the occupants of the nearby towers.

The neighborhood has an interesting history. It was once a contaminated brownfield, home to a power plant, a crematorium, a railroad maintenance yard, a packinghouse, and a de facto landfill that contained detritus left by a nearby fire. Ross Perot Jr. didn’t even break ground on the Victory Park development until 1999. These apartments predated all of those things, but the city has changed.

“Think about how pioneering that development was. You know, none of this that you can see here existed,” Fitzgibbons told me in a conference room at Hunt HQ that looks out toward Victory. “But today, it’s just not the highest and best use for that land anymore.”

He says the sheer size of the property opened up many possibilities, like being able to allocate between 10 and 15 percent of the site for open space. The planned towers, five of which are depicted in the renderings, will surround the open space that will connect out to the street grid, beyond the property.

Dave Humphries, chief operating officer for the neighboring Perot Museum of Nature and Science, spoke at the City Plan Commission in favor of the project. As did Tony Page, who represented the Uptown Neighborhood Association. The Oak Lawn Committee, the quasi-public group that gives its thumbs up or down to projects requesting rezoning in Uptown and Oak Lawn’s broad PD-193 development district, gave its support. 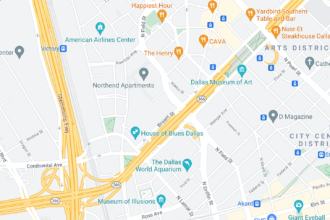 The location of the Northend Apartments, where the new development will go.
Google Maps

But some residents in Victory Park—particularly at the W residences—remain skeptical. Early plans showed an enormous development that pointed most of its amenities inward, focusing more of its attention on Field Street closer to Uptown than Houston Street in Victory Park. Hunt had planned for Houston to be what some of these neighbors characterized as a “back alley” of loading docks and trash pickups.

Today, Houston Street has more activity on either side: the edge of Victory Park to the north, the restaurants and bars cropping up south. The neighbors wanted to see the block across from the W activated, as well. Meanwhile, along the stretch of Houston that borders the project, the W is renovating the northern corner of its property, and a restaurant is going in at the end of the block. Bobby Abtahi, the former vice chair of the Plan Commission and former Park Board president, represented Victory Park residents in negotiations. (His family owns a place at the W that looks out at the planned project.)

Discussions with the neighbors led to new activation on Houston Street. Hunt agreed to reposition its loading docks to align with the W’s and put the rest inside its site. The Plan Commission’s approval requires filling at least half of Hunt’s side of Houston with retail, restaurants, or another ground-level use. Hunt plans to incorporate a 20-foot-deep pedestrian plaza at the corner, which the company believes will help handle pedestrian overflow on Nowitzki Way after events at the American Airlines Center. 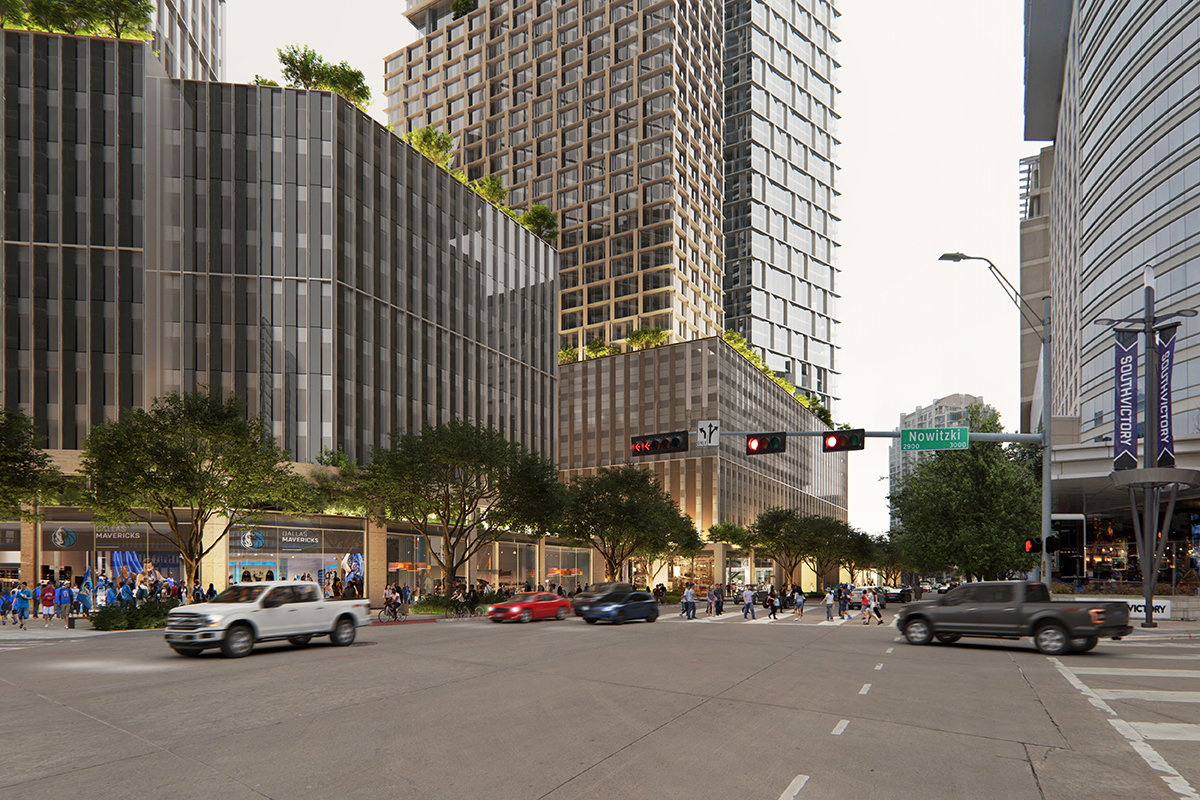 Houston Street will also have direct access to the green space inside. That wasn’t originally part of the plans, Abtahi said.

“The neighbors did push us,” Fitzgibbons said before the meeting. “They had some constructive criticism of our project and rightly so, because they live there. They walk the sidewalks every day. They understand it better than we do, in some respects. So they pushed us, and we’re going to have a better project because of their input and involvement.”

One thing the Victory Park crowd didn’t get: relocation of the towers. During the Plan Commission meeting, the neighbors said they feared being walled off by the skyscrapers planned to abut Houston Street in the renderings. They wanted them relocated to Field, which is more of an auto-centric connection into downtown. So while Abtahi said he felt Hunt negotiated “in good faith” and now supports the project, some of the neighbors spoke out against it to the Plan Commission despite the changes.

“I am part of a grassroots neighborhood group. We go into this naively, but with passion,” said W resident Carol Booth, who spoke in opposition of the project during the planning meeting. “We realized what has happened is they have created this wall of skyscrapers down Houston, they’ve created a huge blockage to Victory Park, to the whole Victory Park neighborhood.”

If the City Council agrees to Hunt’s request to become its own subdistrict, the company could choose to reorient the buildings in the future. And Fitzgibbons said the plans now include broader setbacks and additional open space that would allow for easier entry into the park area.

“You’re not going to get that much control over a site unless you own it,” said Abtahi. “They own it and we don’t and to the extent they were able to work with us and improve the corridors and give us some light and space — it’s obviously not what some people think was ideal — but we ended up in a good place.”

This development is only part of the activity headed to the immediate area. Hillwood recently announced a 38-story office building just south of Woodall Rodgers. And Kaizen Development Partners and Woods Capital are redeveloping 6 acres on two blocks near Woodall, which it’s calling the Field Street District. Not to mention the D2 subway line, the expansion of nearby Klyde Warren Park, and the western connection with the Katy Trail into the Design District.

Fitzgibbons said it is rare to find this much land to develop in such an important and dense economic corridor, which freed the company to dedicate more than it typically would to public space.

“The bet we’re making is open space is a universal truth,” Fitzgibbons said. “Let’s just say some big corporation has the choice between this and a couple other development sites. They’ll see this open space and be attracted to it. … What we’re trying to do here is making a long-term bet on the continued growth of the city of Dallas.”