Here Are the Five Possible Futures for I-345

TxDOT is showing off the most detailed look yet at what could happen to the elevated highway running through the heart of downtown Dallas.
By Alex Macon | June 23, 2021|12:01 pm
Advertisement

The Texas Department of Transportation just rolled out five options for the fate of I-345, the elevated highway that splits Deep Ellum and East Dallas from downtown. Highway removal is hot right now, and tearing down I-345 is on the table. But so is doing nothing at all. Let’s take a look at TxDOT’s alternatives. 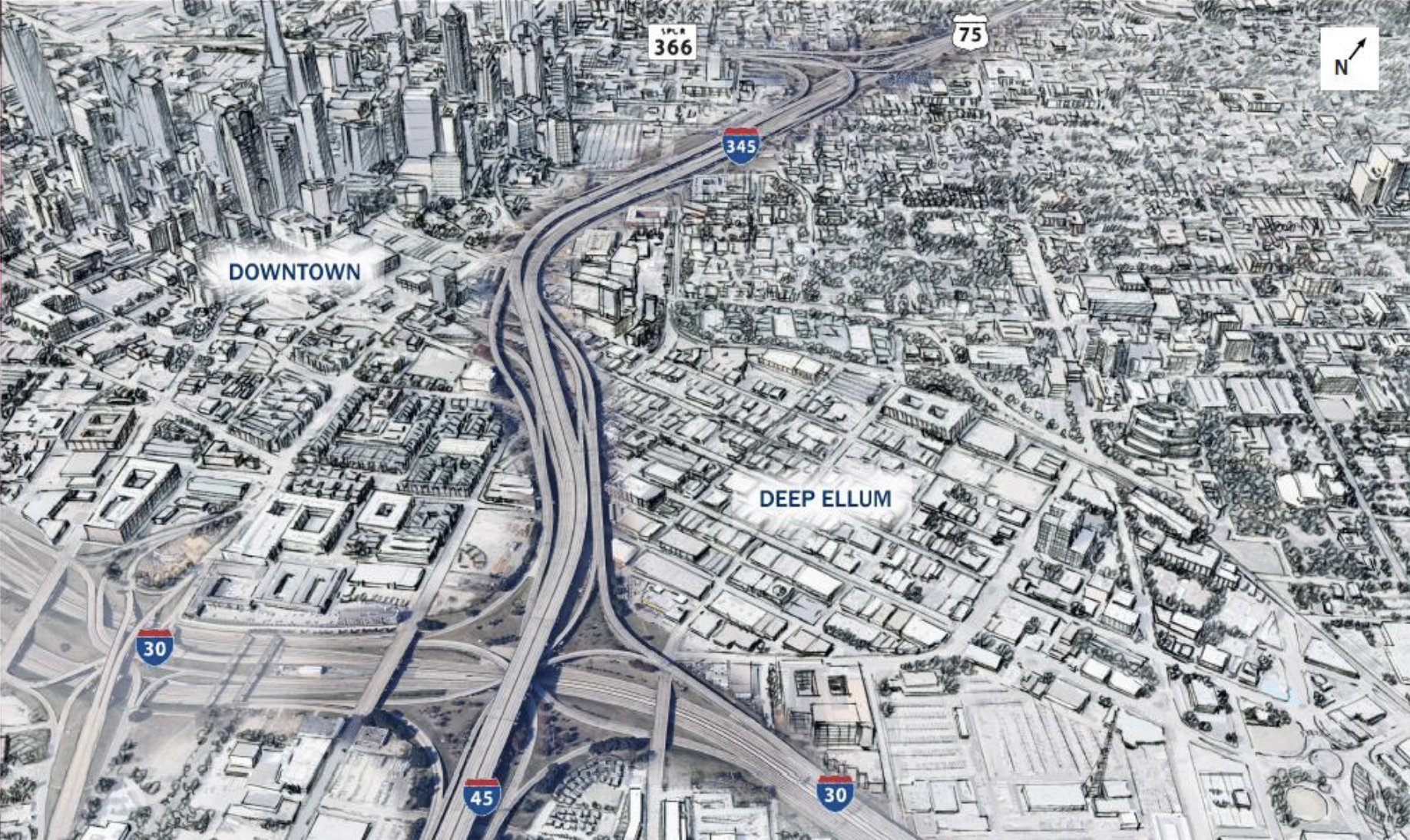 Here is I-345 as it is today. The “no build” option would leave the highway like this, allowing for continued maintenance of the status quo. 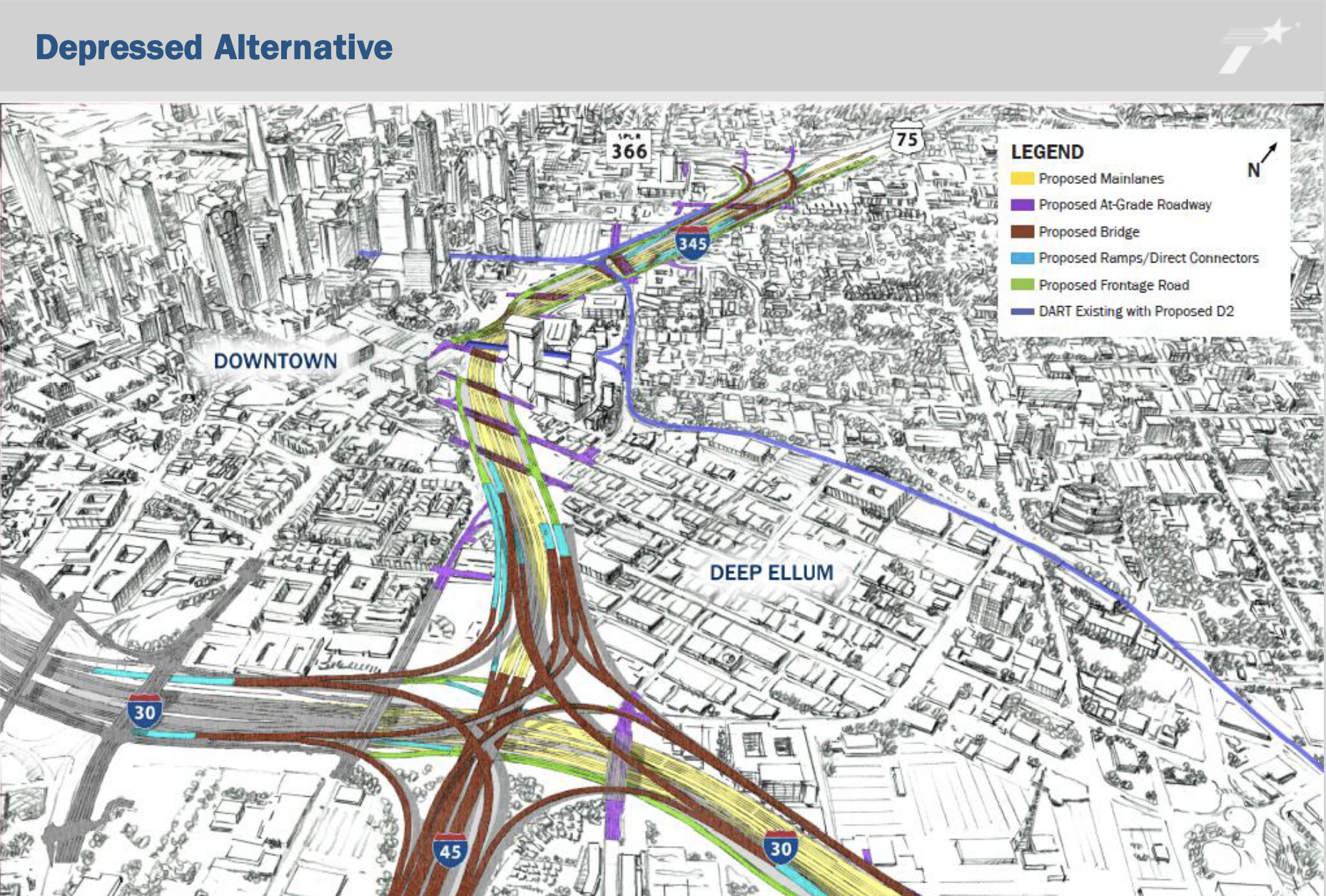 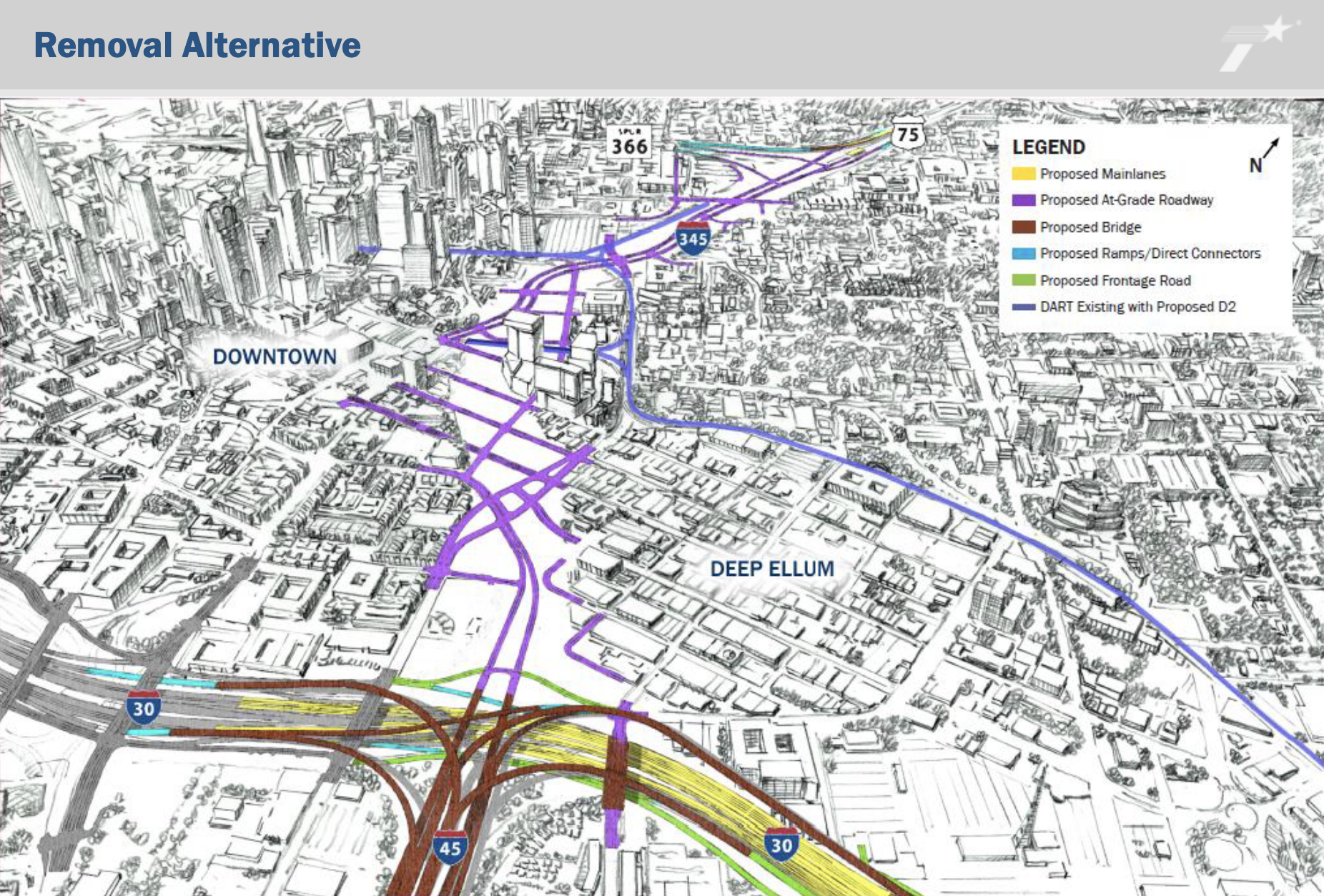 The “removal” alternative: Tear it down and replace it with city streets, sidewalks, bike lanes, new development, the works. Highway traffic would be steered to Interstate 30 or into downtown. 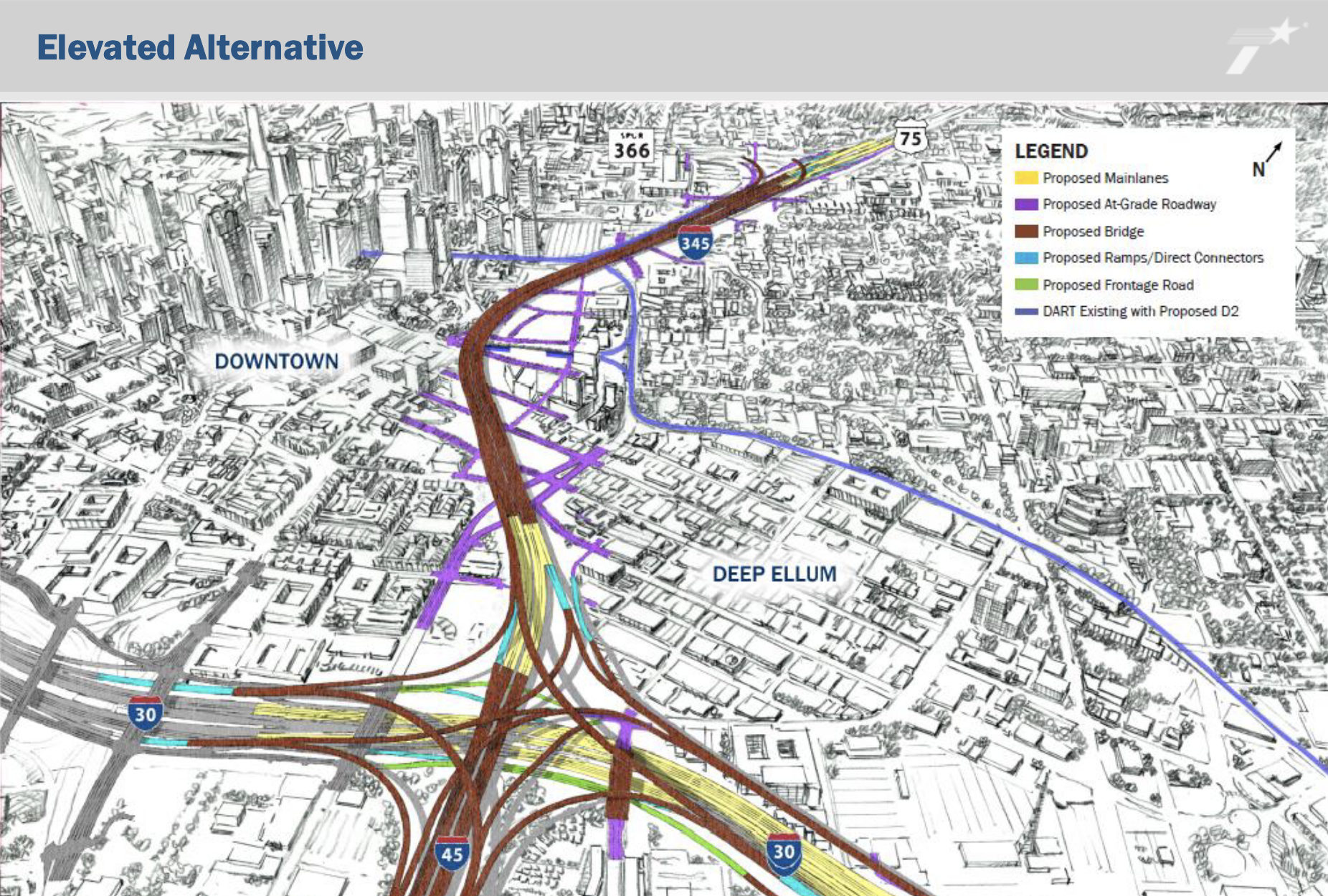 The “elevated” alternative would leave I-345 standing, but would improve the nearby city street grid, throw in some “aesthetic improvements,” and make it easier for pedestrians and cyclists to move about under the highway, according to TxDOT. 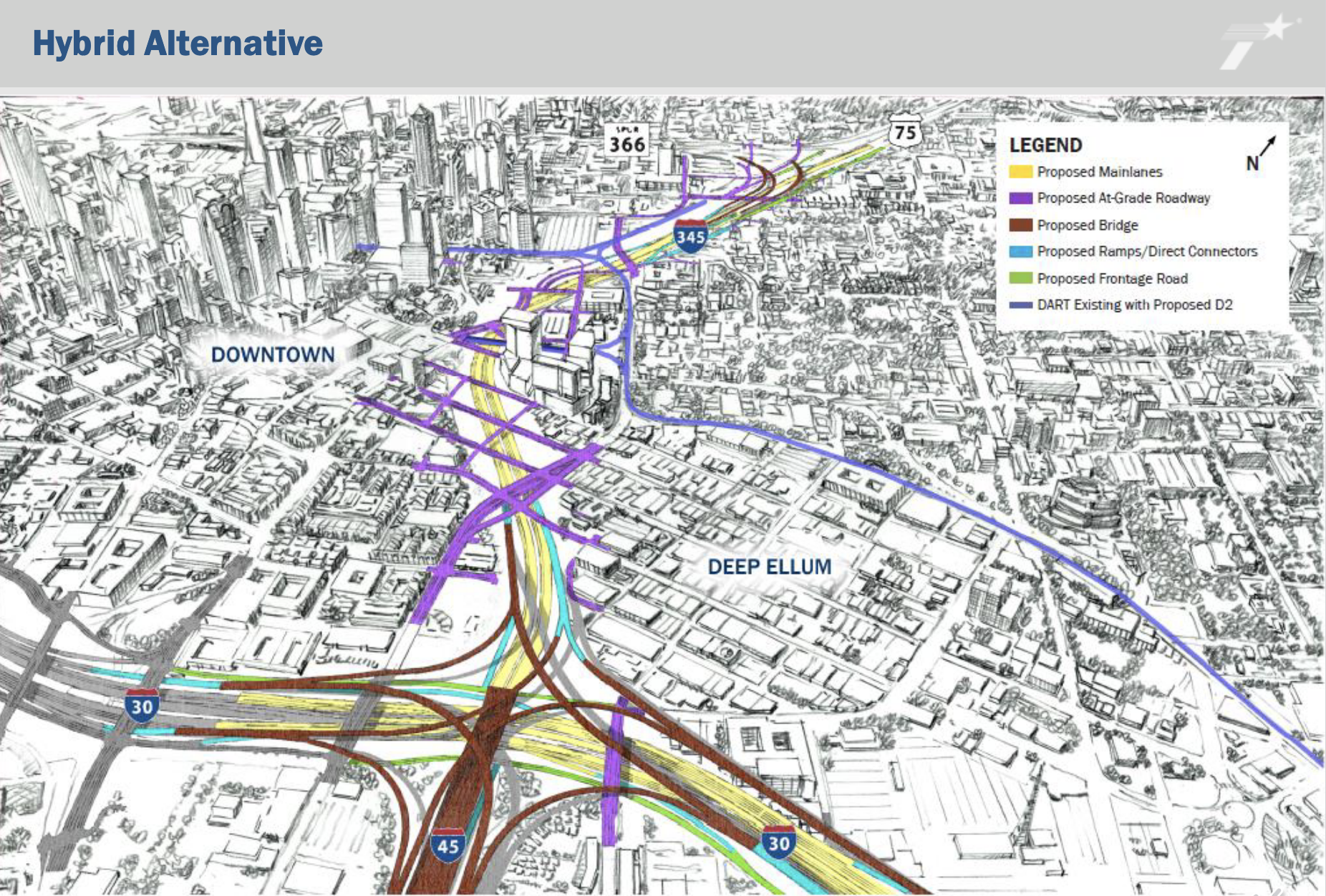 Sort of a compromise “hybrid” between lowering and removing I-345. The highway gets depressed. No frontage roads. At-grade city streets will go over the top.

This latest update from TxDOT also includes an analysis and additional data related to the question that everyone asks when tearing down I-345 gets brought up: where does all the traffic go? The short answer is that TxDOT thinks removal would drastically increase traffic congestion in the area, adding an additional 19,000 hours of traffic congestion per weekday.

For a counterpoint to that kind of dire warning, take a look at this study of I-345 from the Toole Design Group, which we covered on FrontBurner a few months back. It found that, if done correctly, removal would not create such a traffic apocalypse. According to the report, a reconstructed street grid could handle just as much capacity as a highway, and if I-345 is torn down, a good deal of traffic would in fact “evaporate” as drivers seek out other routes that wouldn’t take them through downtown. That report points to how major urban highway removal projects in other cities have not hurt overall mobility.

Looking at the latest TxDOT materials on I-345, I was also struck by this “evaluation matrix,” basically a tally of how many boxes each of these five proposals checks. Does it “minimize impacts to corridor mobility” and “improve bicycle/pedestrian mobility,” and so on? The “hybrid” proposal seems to be the one designed to check the most boxes, to make the most people happy—or, at least, as unhappy as everybody else. But it’s not cheap.

What do you think? Don’t tell me. Well, tell me if you really want to. But also tell TxDOT. Go here to see more of the latest details on its study of I-345, and to give feedback. We will surely have more on these options as the months progress.

Scalawags have been using the bridge to, you know, WALK places.
By Tim Rogers
Transportation