Hensley Field, 738 acres of city-owned land on the far western edge of southern Dallas, has existed for years in a state of limbo. It is many things at once.

You can see it as a storage facility, where Dallas has temporarily stashed everything from Confederate statues to pets. Look at the site and you can’t miss the view of Mountain Creek Lake—this is waterfront property in North Texas, a developer’s dream. Yet vestigial signs of its history as a Naval Air Station remain in evidence, and some see Hensley Field as a toxic waste dump. It’s true that years as a military site left contaminants behind in the soil of Hensley Field, and the Navy has been slow to finish the cleanup it promised when it sold the land to the city.

Dallas officials look at Hensley Field, and they see a blank slate bigger than downtown.

“This site represents a huge opportunity for creating what would really amount to a small town, where you can create a new job center, new mixed-income housing opportunities that are accessible to jobs,” says Peer Chacko, the city’s director of planning and urban design. “It’s very central to the region, so it has a lot of potential to become an economic engine for southern Dallas. I don’t think its potential can be overstated. For southern Dallas, which has been under-invested in for decades, this represents a huge opportunity if the city plays its cards right.”

Realizing that potential is a project that could take decades, but the city is starting by putting together a new master plan for the site. A few weeks ago, residents were invited to tour the location. Advisory groups have been convened, online surveys posted. A timeline calls for a “preferred scenario” to be delivered this summer, with the full plan due next spring.

Hensley Field falls in a designated Opportunity Zone, part of a federal program providing tax incentives to developers in low-income neighborhoods. But Chacko says the city can’t rely exclusively on this program, which comes with tight deadlines, and Dallas is looking further at other ways to kickstart development at the site. That’s part of what the master plan is meant to accomplish: a strategy for financing and implementation.

More than that, it will “set the trajectory” for everything that happens at Hensley Field, Chacko says. The city won’t just hand the reins to the first developer that expresses an interest. “The plan will set up a mechanism by which we can actually get some competition and make sure we get the best possible outcome here,” he says. “And then we can also measure how the site can be used to advance specific city objectives related to economic development, related to the environment, and related to equity.”

McCann Adams Studio, the firm charged by the city with developing its master plan for Hensley Field, previously led the redevelopment of Austin’s old Robert Mueller Municipal Airport, now a bustling “urban village” with housing, retail, and office space. The city of Austin partnered with one major developer on the site. The project got a significant boost when a large institution, the Dell Children’s Medical Center, committed to building at Mueller, investing in infrastructure at the site, and proving to the broader real estate market that turning an old airport into a real neighborhood was not such a crazy idea. What Austin did with Mueller bears many similarities to what Dallas hopes to do with Hensley Field, but it may not follow that exact path.

“We’re developing a series of scenarios. One of the scenarios is we find a major user to kick the project off,” says Jim Adams of McCann Adams. “Another scenario is that we lead with residential and we take advantage of the market, which is very hot right now for residential.” 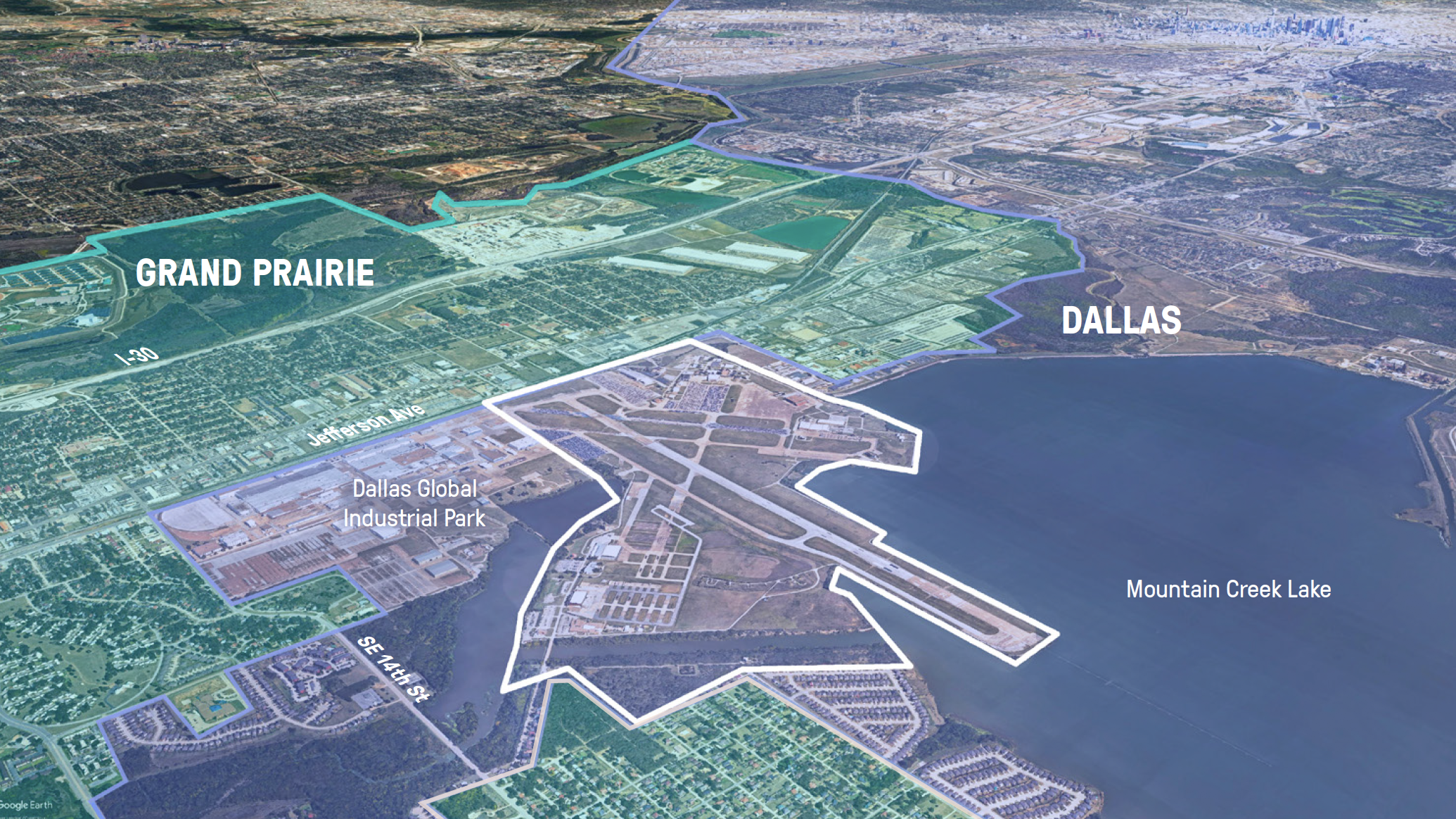 The city is testing the waters on that kind of “catalytic” user, talking to universities and healthcare providers to gauge their interest in the site. But Adams doesn’t see this as strictly necessary to moving forward with Hensley Field. By the same token, the city may turn to either one master developer or multiple developers to transform Hensley Field’s 738 acres. The Dallas City Council also recently approved the creation of an economic development corporation with the power to develop properties owned by the city—like Hensley Field.

It is worth noting that Austin’s Mueller Town Center development is basically in the middle of the city, just north of Airport Boulevard, near plenty of existing activity. Dallas will not have the same sort of jumpstart with Hensley Field, which is located about 10 miles southwest of downtown in a part of the city that isn’t a robust job center. Adams isn’t too concerned about the distance from the city center impeding development at Hensley Field. He mentions a similar redevelopment project in Denver, where the decommissioned Stapleton Airport was transformed into the Central Park neighborhood about eight miles from that city’s downtown.

The location does have its benefits, Adams says. There’s the view of the lake. Dallas Baptist University is on the horizon. But planners are well aware of the challenges Hensley Field poses. There hasn’t been much investment in the area. The Dallas Global Industrial Center, a large manufacturing site, is right next door. “We have to overcome the image of the old naval base itself,” he says. “That will be important in the early phases of the project: What we do to start changing that identity in terms of the real estate market.”

Officials hope Hensley Field will ultimately turn into a source of revenue for both the city and private developers, but public investment will be necessary, especially in the early going. The city has talked to DART about possibly extending a bus line to Hensley Field, where no public transit currently runs. There’s a high-ridership route along Jefferson Boulevard through Oak Cliff that could conceivably go all the way to Mountain Creek Lake. Long-term, there’s potential for a light rail route, Adams says.

“Transit is going to be very important in terms of being able to sustain this development,” he says.

The biggest sticking point for skeptics of the redevelopment of Hensley Field is the potential contaminants left behind by the Navy. Adams says the Navy has already finished cleaning up most of the contaminants on the site, although one particular contaminant is still being studied: PFAS, or per- and polyfluoroalkyl substances, a kind of firefighting foam. PFAS contamination has been detected in some of the soils in the area and in the groundwater. Over the last couple years, the federal government has ramped up its efforts to clean up PFAS contamination at sites across the country.

“The Texas Commission on Environmental Quality has cleared the site for all of the other contaminants,” Adams says. “It has not cleared it for PFAS because the science is still not settled on how this chemical is to be mitigated, and we have not yet seen exactly where it is relative to the soil and groundwater.”

The Navy should have completed its study by the end of the year.

“What the Navy has told us is that that mitigation program will not impede redevelopment of the site,” he says. “Especially if it’s groundwater. There are monitoring wells that are out there today that are continuing to monitor groundwater. And the other important thing to note is that the Navy has a settlement agreement with the city of Dallas that confirms they will clean the site up to residential standards.”

In the meantime, city officials hope a master plan will push Hensley Field out of its long limbo.