The last couple years have seen a renewed and serious interest in UFOs. Any day now, national intelligence and defense officials will deliver a report to Congress on the unidentified aerial phenomena that have been seen in U.S. airspace. Leave the notion of little green men from Mars out of it. A lot of smart, credible people are convinced that something—whatever it may be—is going on.

So when I call the Wise County Historical Society, I am prepared to ask the following questions without blushing. Did a spacecraft crash in North Texas in April 1897? And was its extraterrestrial pilot buried in the cemetery in Aurora, a small Wise County town about 25 miles northwest of Fort Worth?

I get the impression people in Wise County are sick of getting asked those questions by UFO enthusiasts—or, worse, by reporters. But the historical society agrees to leave “the box” out for me on a table at the Wise County Heritage Museum in Decatur. It’s a beautiful old building that once housed the Decatur Baptist College and now contains a really neat museum full of artifacts and exhibits dedicated to a rich regional history that has nothing to do with spaceships. I spend some time walking through the museum, but I am not here for this. I am here for the box.

I open it, and there’s an alien face staring up at me. Wait. Just a mask. There’s a 1991 book, The Great Texas Airship Mystery, by Wallace O. Chariton, and some photocopies of a town survey of Aurora conducted in about 1890. Mostly, there are newspaper articles, some dating back decades and others published much more recently. A quick Google search will also show you how the story lives on. Aurora isn’t Roswell, but its UFO legend has legs. 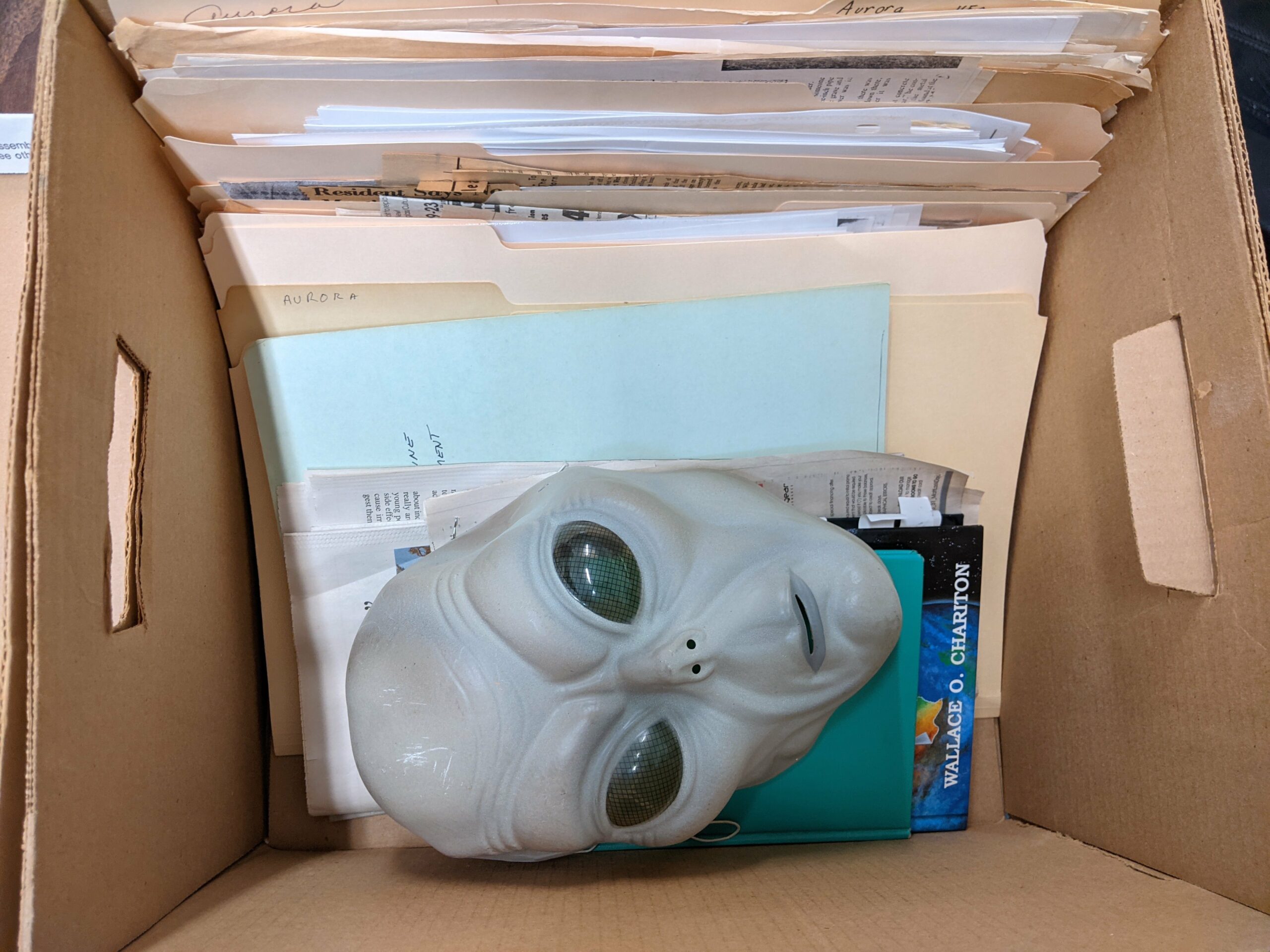 “The box” at the Wise County Heritage Museum, containing one alien mask and many more articles on Aurora’s UFO legend.
Alex Macon

The articles in the box invariably make note of what was reported in the April 19, 1897 edition of the Dallas Morning News. Page 5 of that day’s paper is loaded with reports of an unidentified flying object spotted all over North Texas. A cigar-shaped vessel was seen in Greenville by a man, out for a midnight stroll, who was “dazzled by the light and frightened almost out of my senses.” A day later, the “much talked of airship” was in Collin County, where it “almost caused the destruction of Plano’s large two-story public school building.” One Judge Love, of Waxahachie, told a reporter that he not only saw the airship, he talked to its crew. They were visitors from the North Pole, which had been made habitable by some elaborate pipe system circulating steam throughout the frigid region, according to Judge Love.

These reports are delivered in a sober enough tone. The DMN does suggest that this “great aerial wanderer” might be the real deal, or it might prove that “Ananias and Sapphira were mere amateurs,” an allusion to the Biblical figures known for being especially full of it. The paper further quotes skeptics including “Dr. E. Etuart, an acknowledged authority in metaphysics, [who] gives it as his opinion that the whole affair is due to hypnotism and bad whisky.”

Yet there were plenty who wanted to believe. And one story in the paper that day would, over the coming decades, inspire more believers than any other. Under the headline “A Windmill Demolishes It,” a stringer named S.E. Haydon relates how the airship “sailed directly over the public square” early one morning in Aurora, a small Wise County town just northwest of Fort Worth. The craft then hit “Judge Proctor’s windmill” and exploded. Its pilot was killed, and the remains of the airship’s lone occupant were disfigured. Haydon writes:

Mr. T.J. Weems, the United States signal service officer at this place and an authority on astronomy, gives it as his opinion that [the pilot] was a native of the planet Mars.

Papers found on his person–evidently the record of his travels–are written in some unknown hieroglyphics, and can not be deciphered.

The ship was too badly wrecked to form any conclusion as to its construction or motive power. It was built of an unknown metal, resembling somewhat a mixture of aluminum and silver, and it must have weighed several tons.

The town is full of people to-day who are viewing the wreck and gathering specimens of the strange metal f­rom the debris. The pilot’s funeral will take place at noon to-morrow.

I thumb through the articles in the box. So how about it then? Was there a spaceship? Is a Martian buried in a North Texas cemetery?

No, according to the Wise County historians who have investigated the matter. I get the gist of what they suggest really happened by reading through the stories in the box.

Haydon was most likely a hoaxer, putting his spin on the nationwide phenomenon of airship sightings that had already been all over the papers. It may have been his attempt to bring attention to a town that had been missed by the railroad and hit hard by an epidemic. Several people who lived in Aurora in 1897 later told historians there was no crash. There may not have even been a windmill. If the pilot’s papers with its hieroglyphic messages were kept, they’ve been long since lost. And the Dallas Morning News at the time showed curiously little interest in following up on what, if true, would have been the biggest news story in human history.

Aurora has over the years had a complicated relationship with its UFO incident and its Martian, who was at some point dubbed “Ned.” A few years ago, the town hosted a UFO conference. But stories from the early 1970s, when UFO investigators searched for metal remnants of the spacecraft and pushed to exhume Ned’s supposed remains, feature some understandably peeved residents.

Before my trip to the museum, I pay a visit to the Aurora Cemetery myself. There’s a state historical marker out front, which notes: “This site is also well-known because of the legend that a spaceship crashed nearby in 1897 and the pilot, killed in the crash, was buried here.” In the cemetery, there’s a boulder marking what legend holds to be Ned’s gravesite. Other visitors have left mementos: flowers, coins, a glass sleigh, a faded Polaroid, a tinfoil hat. 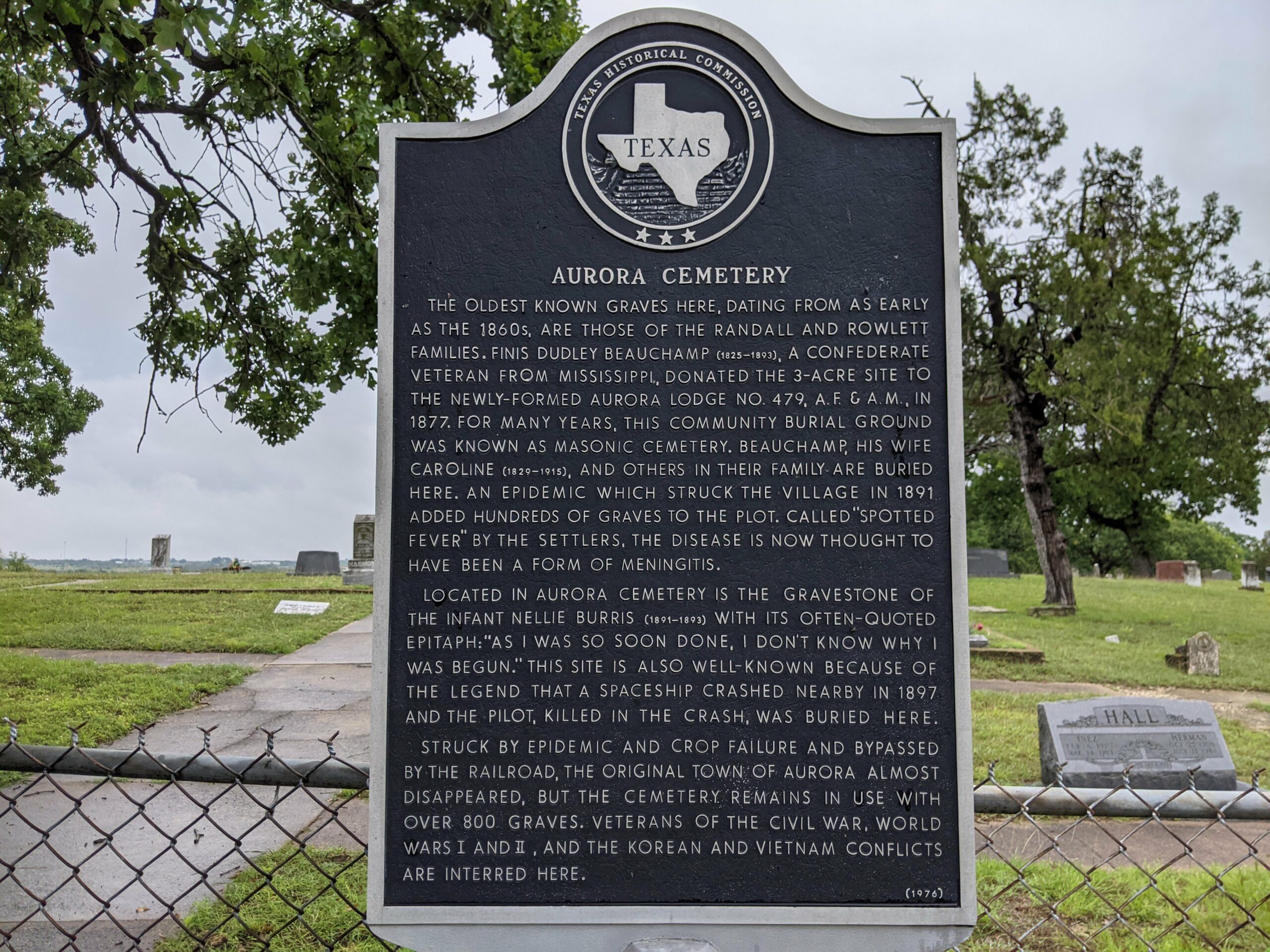 The historical marker outside the Aurora Cemetery, which notes the legend of an 1897 UFO crash nearby.
Alex Macon

There used to be a proper grave marker here, which was decorated with an etching of the UFO, or airship, described by so many North Texas residents in the late 1800s. It was stolen in 1972, and its replacement was stolen 40 years later. In 2018, the Fort Worth Star-Telegram reported that a Dallas lawyer, Stratton Horres, was offering a $1,000 reward for the grave marker’s safe return.

I email Horres and we get on the phone. He says the offer still stands. In fact, he’s upped the reward to $5,000, no questions asked, “conditioned upon verification that the tomb stone is the original” as seen in the photo here.

He is interested in the legend, but skeptical. He believes in the need for evidence. He knows that 90 to 95 percent of unidentified aerial phenomena can be explained—by conventional technology, or swamp gas, or optical illusion, or whatever the case may be. Still, that leaves the other 5 percent we can’t explain. The Pentagon of today knows as much about UFOs as Texans knew about mysterious flying airships 124 years ago.

“We’re not that far off from where the people in rural Texas were in 1897. You fast forward and nothing has changed,” he says. “These are still un-explainable objects.”

Horres, I feel obligated to tell you, is no crackpot. He’s a successful attorney. He says his colleagues razz him about the UFO thing sometimes, but he’s a sharp guy. A normal guy. Like many people, he grew up enchanted by stories of mysterious visitors from the skies. A 40-year career in law doesn’t leave much time for independent investigation, but he’d heard about Aurora. So a few years ago, one weekend when his wife was at a baby shower, he first made the hour-or-so drive out to the cemetery. He’s been back a couple times.

He tells me about something he saw at Aurora Cemetery.

“There’s a family: a father, mother, and three kids. A relatively young couple,” Horres says. “The father was telling the kids the story of the crash. This father and mother wanted their kids to know the story. He’s passing it down. He wasn’t correct in all the details. But he was firing up the kids’ imagination. I thought that was fantastic.”