The Margaret McDermott Bridge Will Finally Open to Pedestrians Next Month

It's four years late and $7 million over budget, but you can soon walk or bike over the Trinity River along the Margaret McDermott Bridge.
By Alex Macon | May 24, 2021|10:04 am
Advertisement

Next month, you’ll finally be able to walk or bike on the Margaret McDermott Bridge over the Trinity River. In a memo on Friday, City Manager T.C. Broadnax announced the “near completion” of long-awaited repairs to the bike and pedestrian parts of the bridge, to be marked with a June 10 ribbon cutting ceremony. It’s a surprisingly celebratory way to cap what has been, after all, a pretty embarrassing and costly saga for everybody involved.

The highway-holding part of the bridge opened in 2017 as a kind of sister to the Margaret Hunt Hill Bridge, ferrying car traffic over the river along I-30. That’s been going OK. It’s the other parts, the roughly $115 million parts intended for pedestrians and cyclists, that have caused all the headaches. Worries about the safety of the cables connecting those big white arches to the pedestrian sections of the bridge delayed its opening, originally scheduled for 2017, and occasioned some interminable finger-pointing between the people who designed the bridge and the people who paid for it.

There was enough blame to go around. Dallas did in fact skip a critical engineering test to save money on construction, and star architect Santiago Calatrava does have a history of saddling cities with troubled projects. The contractors who did the actual building also caught some heat.

All that finger-pointing did have a point, because nobody—the city, the state, Calatrava—much wanted to pay to fix the problem. While the state paid for the highway part of the bridge, the hike-and-bike sections were funded by about $90 million in federal dollars, the rest coming from the city and private donors. In April 2019, the city agreed to cough up another $7 million to pay for repairs. I asked the city this morning about the final price tag, and will update this post if I hear back.

See you at the ribbon-cutting. 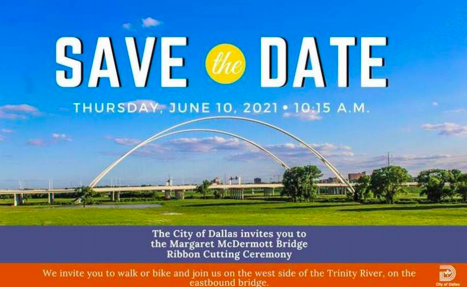 Northaven Trail Pedestrian Bridge Over US 75 Will Link Disconnected Neighborhoods

An expansion over the highway will link the North Dallas trail to the White Rock Creek, Cottonwood, and SoPac trails on the east side of Central.
By Alex Macon
Events

The Dallas Arboretum kicked off Hispanic Heritage Month by welcoming dozens of young women to model their Quinceañera best throughout its grounds.
By Bret Redman
Transportation