The 50-mile Loop Trail is one council vote away from beginning construction. The Park and Recreation Board last week approved a $5.7 million construction bid for the first phase of the project, which will pave a new trail just below White Rock Lake through what is now the Tenison Glen golf course. That course, as you’ll recall, will soon be reduced from 18 holes to 9 and turned into a nature preserve to follow the findings of the Samuell Grand Master Plan. The trail will run through it. (The county will pay for $3.5 million, while the city’s bond program covers the rest.)

The Loop connects 39 miles of existing trail and creates a new stretch that will extend south into the Trinity Forest from near White Rock Lake. This is called the Trinity Forest Spine Trail, and the first phase splits off from the Santa Fe Trail, goes through Tenison, and concludes at Samuell Boulevard. The first construction piece will also include a spur at Highland Road just east of Tenison Park. The city has spent nearly $4 million on reconstructing Highland Road near the Forest Hills neighborhood, and the spur will tie into new cycling infrastructure there. The Dallas City Council is scheduled to vote on approving the construction bid during its June 9 meeting. (The county will pay for $3.5 million, while the city’s bond program covers the rest.)

All You Need to Know About the Loop

Here is the longer story we wrote late last year, detailing the project as a whole.

The first phase will take between 12 and 18 months to finish. The conservancy will be finishing design and bidding out the other phases concurrently. The second phase of the Trinity Spine will begin at Samuell and extends into southeast Dallas on its way to the Trinity Forest. It will stretch about nine miles in total. If the project’s timing goes as planned, the second phase will begin construction in the second quarter of 2022. 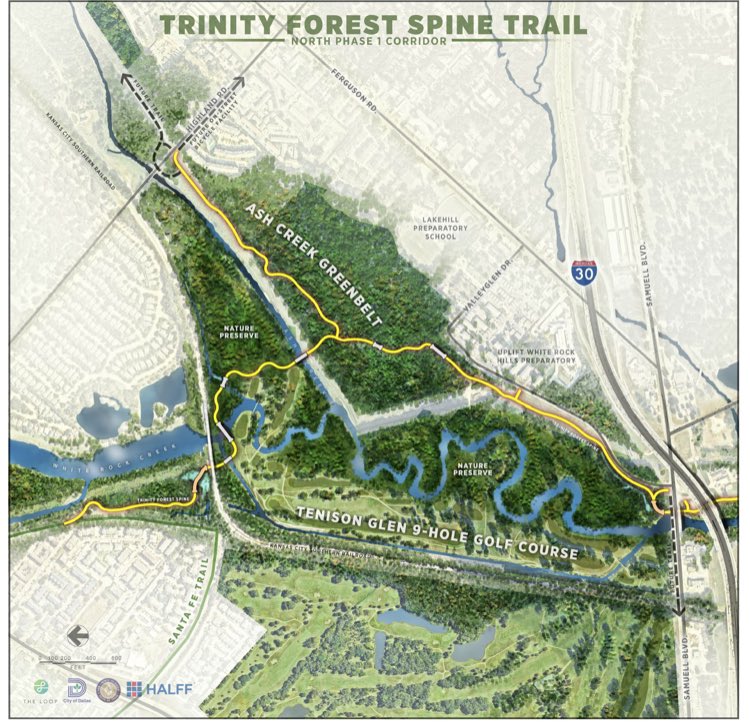 And new funding sources are opening up new opportunities. Haigh wasn’t ready to detail specifics, but he said the Circuit Trail Conservancy is preparing to pursue federal infrastructure dollars to pay for an extension to the Lake June DART station, which is about 2.5 miles east of the Bonton neighborhood. The Loop had plans to connect to the Lawnview DART station further north, but this would allow another pedestrian connection with transit.

“We’re going after the infrastructure and transportation money and there aren’t many other projects that are applying for it in the same way,” Haigh said. “We qualified for a lot of stuff that something like Klyde Warren wouldn’t, because we’re connecting to transit.”

If all goes to plan, Haigh hopes to hold a groundbreaking for construction at the end of June.