First-time homelessness has risen over the last several years, and the COVID-19 pandemic has made life even more difficult for our most vulnerable neighbors.
By Alex Macon | May 11, 2021|2:47 pm
Advertisement

The Metro Dallas Homeless Alliance today released the results of its latest point-in-time count, an annual survey of homelessness in the Dallas area. Outreach teams in February and March found 4,570 people who were homeless in Dallas and Collin counties.

That’s up from last year, when 4,471 people were counted, but the Metro Dallas Homeless Alliance cautioned that this year’s count isn’t comparable for a few reasons. MDHA, which coordinates dozens of organizations and services centered on housing and homelessness, typically relies on teams of volunteers to venture out on one night in January to conduct surveys. Because of the COVID-19 pandemic, the count was instead conducted by professionals over the course of a couple weeks, between Feb. 18 and March 3. (The “night of record,” for the survey’s purpose, was Feb. 18; people were asked where they had slept that particular night.)

Those weeks also fell during the winter storms and power outages that ripped through Texas, and may have skewed the number of people counted as “sheltered” because they were housed in warming shelters amid the freezing temperatures. The report estimates “that approximately 600 of those who were counted in warming stations would have been on the streets were it not for the cold. The effect of the pandemic on availability of beds in the emergency shelters because of the necessity of social distancing during the pandemic also may have affected the emergency shelter count. In addition, persons experiencing homelessness may be reluctant to stay at a shelter due to fear of the virus.”

Teams count both “sheltered and unsheltered” people, including people who are staying in shelters or transitional housing as well as those who are sleeping on the street or in an encampment.

Mandated by the federal government, these counts help the U.S. Department of Housing and Urban Development decide how to distribute grant money. If only a snapshot, the count also gives area service providers a better picture picture of the families and individuals who need help finding somewhere stable to live. Even with the asterisks noted above, the statistics and charts from this year’s count are depressingly similar to years past. These are taken from the report: 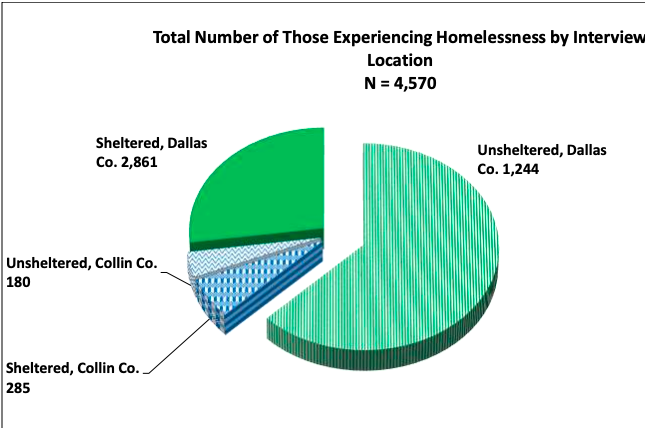 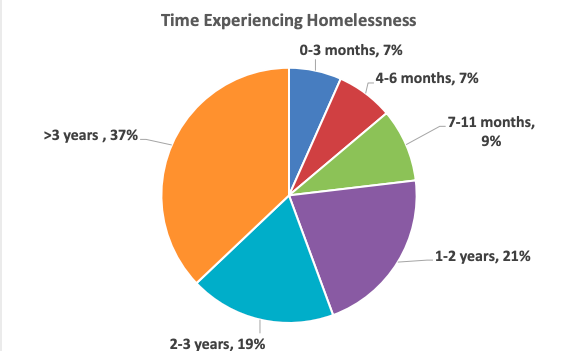 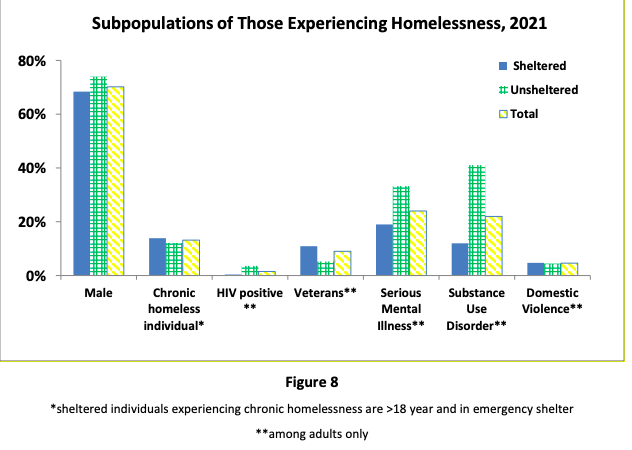 The data here are important. Peter Brodsky, chairman of the MDHA board, said in a virtual “State of Homelessness” address today that the continuum of care system is revamping its reporting system to collect more accurate and precise data. That helps get more federal funding, for one thing. And it lets service providers know how they can help.

“We all know that the solution to homelessness is a home,” Brodsky said. “But not all housing types are right for each person.”

“The long and short of it is that we need more affordable housing units,” Brodsky said. In the meantime, MDHA has seen some success with rapid rehousing. “As first-time homelessness increases, we have got to work hard to increase our inventory of interventions like rapid rehousing,” he said. “Thanks to available funds from the CARES Act last year our system has gone from 18 rapid rehousing projects at the beginning of 2020 to 47 projects now in Dallas and Collin counties.”

Of course, all the charts in the world don’t communicate the scale of this crisis, or the humanity and vulnerability of people who can’t count on a roof over their heads at night. They do show some alarming trends, one of the more notable being the racial disparities seen in that last graph. Another is a rise in first-time homelessness, which has shot up in the last several years, Brodsky said.

The takeaway there? Many of us are just a few bad breaks and an eviction notice away from becoming another data point in this annual report.