Marsha Jackson has another fight on her hands. For three years, her neighbor was a six-story-tall dump of shingles, which came to be known as Shingle Mountain. It stood there for years as lawsuits wended their way through the courts. Last year, the city finally reached a settlement with one of the landowners to have the pile hauled to the nearby McCommas Bluff Landfill. It was fully removed by February, and the city vowed to begin an environmental assessment and consider acquiring the land, a right given to the city in the settlement.

One problem: that was only one of the landowners involved. Shingle Mountain actually sat on two plots of land that were bisected by a creek. One plot was owned by CCR Equity Holdings One. It paid the city $1 million to haul off the shingles and basically gave up its right to the land. CCR had leased to a man named Chris Ganter, whose Blue Star Recycling was responsible for the illegal shingle dump. (Ganter has denied any wrongdoing.)

The other plot of land, which is located at 9505 S. Central Expressway, is owned by Irving-based Almira Industrial and Trading Corporation. Almira cleaned up its site on its own. The city didn’t settle with Almira, and litigation is ongoing, freeing the company to use the land for the industrial uses it is zoned for. And while the city prepares an environmental assessment for the land owned by CCR, it is doing no such thing on the property owned by Almira. And Almira is getting to work.

On Thursday, the company filed an application with the city to use its property for sorting and separating metals to supply to “mills, trading companies, and export.” Late last week, someone had already hauled in two trailers. They put up a white fence between the two properties. As of today, there are at least eight trailers being stored on the land. An operator at Almira’s recycling facility hung up when asked for comment. Reached a second time, the operator said, “Don’t call us anymore. We’re not interested.” The city will either approve or deny Almira’s request.

Jackson’s home is adjacent to this industry; her property line abuts its fence. Almira’s property is zoned industrial research, freeing the landowner to perform many things that act as research, development, or support for commercial businesses. Jackson’s land is zoned agricultural. This incompatible zoning frees industry to exist next to Jackson’s home. She now says she can’t go outside without breathing in pollutants, which irritate her throat, cause skin rashes, and make her voice break. Jackson says the trucks have agitated the gravel that was placed over where the shingles were, sending dust into the air, which has gotten into her ventilation.

On Friday morning, she could barely speak on the phone. She says she has heard 18 wheelers coming and going on Choate Road, where she lives, and now her house smells of diesel fuel. “This fume is so strong in this room, in my bedroom,” she said. “It’s diesel. It started at 6:30 in the morning. They’re out there, full-on working.” 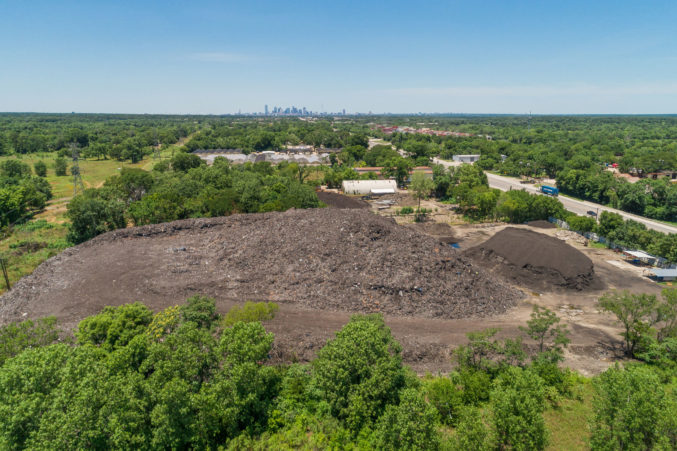 Stacking them deep: From the top of the pile of old roofing material in southern Dallas,
you can see downtown.
Joseph Haubert

A lot is happening in Floral Farms, Jackson’s neighborhood, which lies about 9 miles south of downtown, not far from I-45. As environmental rights advocates wait—and wait and wait—for the city to consider a request to eliminate the industrial zoning in the neighborhood, more and more examples of illegal and quasi-legal industrial uses keep popping up.

The city has received numerous complaints via 311 related to illegal dumping around the neighborhood. In the 4800 block of Simpson Stuart, “oversized vehicles” were being illegally stored on a property. In the 9100 block of South Central Expressway, the city found “litter, substandard fence,” and vehicles being stored illegally on the property.

In the 9300 block of South Central Expressway, the city found “litter, high weeds, substandard fence” and vehicles being stored illegally on the property. The city sent violation notices to the landowners, but it is waiting until early June to see if the properties are remediated before it issues citations.

There are other sites that the city hasn’t yet begun to address: on Bermuda Road, across from a block of about eight residences, you can find an array of trucks on an empty plot of land. Down Bird Lane, not far from Jackson’s home, someone appears to have razed some trees.

All of these locations are within about 1 mile from each other. Jackson formed a nonprofit called Southern Sector Rising to advocate for changing the zoning in this area, which is home to about 130 people. The Floral Farms neighborhood association, called Neighbors United/Vecinos Unidos, is undergoing the city’s authorized hearing process to get this land rezoned.

That hearing has been authorized but hasn’t yet been scheduled. And there are about a dozen more boxes that need to be checked, in the form of public meetings, commission hearings, and council briefings. That could take years. In the meantime, these residents have to live among industry.

Jackson moved here 1995 to experience country living while being close to the city. Her kids rode horses. Then, four years ago, Shingle Mountain showed up. Even after its removal, she has had to help kill a concrete crushing operation that wanted to move in about a mile away. Now her new neighbor might be a whole lot of metal. She and other advocates can help kill these projects piecemeal, but nothing will change until the zoning changes.

“It just blows my mind. This could all be resolved if they actually used their little metrics to bump the authorized hearing up on the grounds of equity and crisis,” says Evelyn Mayo, a paralegal and a fellow at Paul Quinn College’s Urban Research Initiative. Mayo helped with the rezoning process and has long advocated for residents’ property rights in southern Dallas. “This is literally deteriorating the community day to day. If they just did the authorized hearing, the writing is on the wall.” 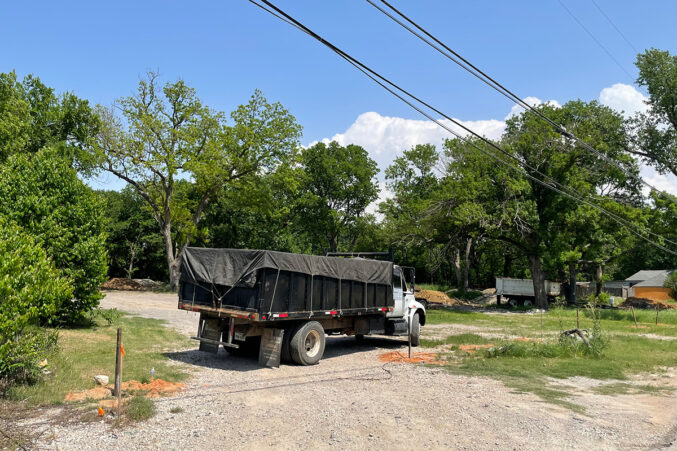 This is the scene across from the homes on Bermuda Road, in southern Dallas.
Matt Goodman

Lorie Blair, the plan commissioner for this district, said she could not comment because of the ongoing litigation with Almira. She’s an appointee of Councilman Tennell Atkins, who represents this district. He did not respond today to a request for comment. When reached last weekend, though, he said, “We do have our eye on it.”

Mayo, Jackson, and others want the city to acquire CCR’s land to turn it into a park. But if it can’t get the plot owned by Almira, the park’s neighbor will be industry. Mayo and her team have plans to meet with the architecture and design firm HKS this weekend to discuss possible park design. She said they met yesterday with Atkins, Blair, Parks Director John Jenkins, Park Board Member Bo Slaughter, and a city attorney.

Mayo believes Almira’s desire to use the property for metal sorting would require a special use permit. She hopes to see Blair and Atkins push for enforcing this requirement. And, indeed, the city code does specify that “a facility which stores, keeps, dismantles, or salvages” metal be subject to a special use permit.

But until that matter is considered, Marsha Jackson is still living next to a dump—this one just isn’t shingles.